Technology has flooded our lives with content. Caught in the mire are today’s musicians who champion an art form that’s more widely distributed than any other throughout human history. And we, more often than not, overlook the music created by unfamiliar faces because it’s challenging. We’d rather have an easy listen, a known quantity to skim through while we think about something else.

How we found it:
Our song submission portal was popping off last week and “Skipping School” is yet another gem I undoubtedly would have missed without spending the time to find unheard music through SubmitHub’s easy-to-use format. This track is another cut from Australia by the 23-year-old singer/ songwriter/ rapper, ZEKIEL, produced by his good friends and duo, DREXL, consisting of Robert Conley and Jack Gray.

Why we like it:
Every moment spent with “Skipping School” is a moment spent journeying through a thick and generous soundscape. The track constantly shakes the foundations built by the listener’s own expectations. As with any good adventure, ZEKIEL understands that breaking expectations is a key component of keeping the audience engaged. Adolescent romance is immature yet serious, exciting but crushing all at the same time. ZEKIEL captures the troubling dualities of young love by crafting a song that’s just as simultaneously chaotic and harmonic.

“Skipping School” starts with ZEKIEL singing a tonaly deep intro-chorus, summoning the ghost of a relationship that never was. The intro reveals his love interest in a girl who is spending her time blowing off classes. His low voice rolls out over a background comprised mostly of synths, picking up the pace when the drums roll in. Shortly following the drums ZEKIEL switches out of the deep vocals and starts rapping; still keeping his voice low but forgoing the deeper pitch adjustment in favor of the rhythm of his natural voice. This girl that holds his attention seems like the perfect storm for adolescent infatuation. The lyrics paint a picture vivid in relatability; foolishly fumbling over finding the right words for that crush you know is just too cool for you.

It’s about me realising at the very last moment that the girl I thought I wanted to be with wasn’t at all what I wanted… She basically had a hold on me for those two years and I did a lot of dumb shit to try and impress her, when I finally told her, she shot me down in about 2 seconds flat!” – ZEKIEL (2019)

Just when I thought I understood the sound of “Skipping School,” ZEKIEL’s steady flow breaks and a Weeknd-esque hook takes over. After talking with ZEKIEL it makes perfect sense that I was reminded of The Weeknd because songs like “The Hills” and “Can’t Feel My Face” provided the soundtrack for his own High School hooky. The higher hook gives “Skipping School” a character foil to the deep intro; carrying over into the next chorus and adding a layer of refreshment that immediately warrants a second play to ensure that yes, that transition was just as good as it sounded.

Related Sauce:   Why We Like It: Vallé’s “Trip Advisor”

While most of the track’s lyrics play off the innocence of those first relationships,in the second verse ZEKIEL is sure not to let the listener forget that those feelings are very real at the time even if certain aspects may seem childish in reflection.

“Skipping School” carries many of the characteristics of a good adventure; surprises around every corner, polar spectrums that bring out the best on each end, and ZEKIEL’s passion for faithful collaboration. Throughout our interview he consistently called back to the hard work of his friends and talked about the career moves they were making as well. ZEKIEL’s knack for companionship and adventure shouldn’t be surprising given his interesting creative capacity for Lord of the Rings fan-fiction. He may have started writing music at the age of fifteen after hearing Eminem’s “Cindarella Man,” but before that his natural creativity dove into the world of Aragorn and Sauron that was filmed so near to Australia in New Zealand. We talked about his fan fiction, his adolescent romances and more in my full interview with ZEKIEL found here.

I started writing music when I was 15. But before that I was writing like X men and Lord of the Rings fan fiction from like, 10 years old. I was really into my science fiction and anything that was kind of otherworldly. I loved magic and shit like that. But yeah the first time I probably started writing music was when I was 15 years old. I listened to an Eminem song, “Cinderella Man,” and then I was like, ‘yeah, I’ll write over it,’ and it’s still on YouTube actually, it’s so bad man. And it’s absolutely terrible, but that’s just where it started for me, you know? And then the next day it was ok enough for people to be like, ‘oh, yeah, that was kind of good.’ But then a lot of people were like ‘yeah, that was pretty shit,’ and I was like ‘ok fair enough.’ Yeah after that, I just started writing a lot more music and yeah, and now I just write constantly. All I do is write songs.” – ZEKIEL, for CentralSauce (2019) 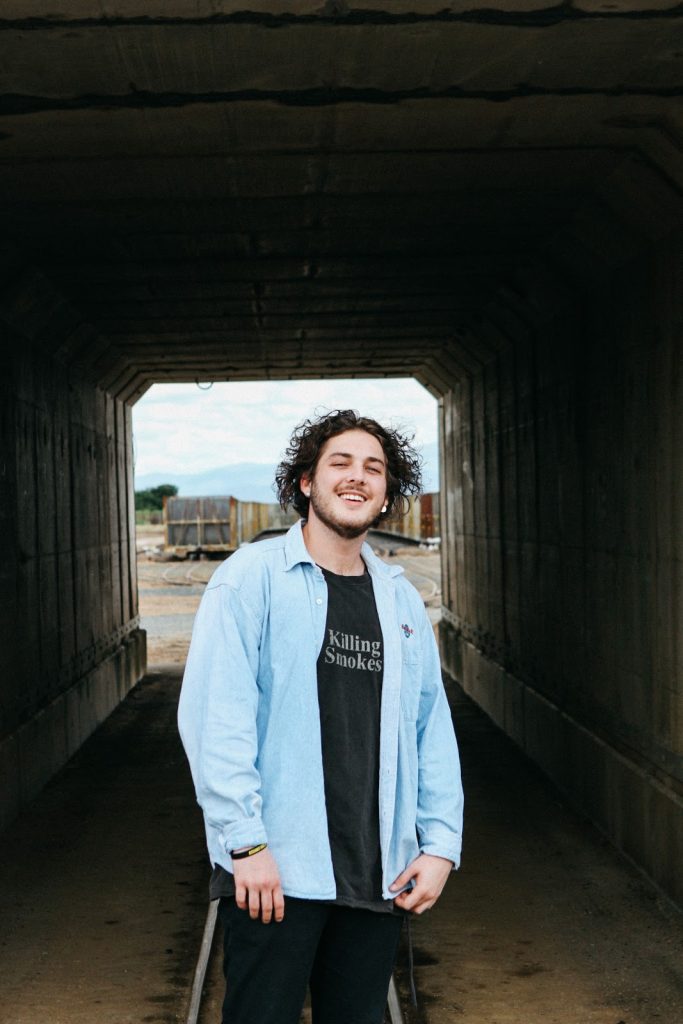 Check out “Writing Away” by ZEKIEL for another great example of his diverse songwriting. ZEKIEL is just one member of a collaborative group he called Ark Valley. You can also check out music by Jack Gray, Ned Houston, and Robert Conley.