The four man Rotterdam alt-R&B-band, Dragonfruit, returns to our SubmitHub inbox to tell of the consequences of numbing everything on “Know Better.” The house infused dose of goodness acts as a warning label for those who might forget what reality can be when choosing to forget it all. The group wanted to experiment with a new sound to get this feeling across.

Previously impressing us with a different spin on a biblical tale on “Apples,” the band is trying something new. Vocalist and songwriter Danique van der Vlught, bassist and sound engineer Bryan Manuel, pianist/ keyboardist Anton de Bruin, and drummer Thijmen Molema embraced this new sound to grace our ears. I found the track to not only give my feet and hips something to dance along to but also something for my mind to ponder about afterward. They crafted a song that hit me on all layers. Check out the new single now.

There’s so much noise coming from different directions to distract from the most important aspects of life. Noise from your job saying you need to work harder. Noise from your parents saying you need this or that to be successful. Noise from society telling you what needs to be done to be a proper, functioning member. Those noises come together to pollute the mind and soul. Sometimes, you don’t want to deal with it and a choice is made to numb it all. In choosing to numb it, you forget how to feel altogether.

Dragonfruit’s “Know Better” is an example of embracing that numbing feeling in glittering and hypnotic house synths. Each distraction grasped sinks you further into that sense of detachment from everything that’s going on. Not only is the bad tuned out, the good is tuned out too. There is a beautiful madness in feeling it all. Yes, a break is good every now and then — to remember the utter greatness of the good— but to be callous to everything is to sacrifice the emotion to inform those lessons.

“When I first listened to the instrumental I had a feeling of melancholy come over me. But I was also getting strong club vibes. The sentence that came to me immediately was I guess I should know better.” – Danique of Dragonfruit for CentralSauce

The lead singer of the band, Danique van der Vlught, has an alluring beauty to her voice. She’s like the siren that’s drawing you closer to the flashing, bright lights of the music as you sink further away to forget all that made you, “you.” The lyrics she came up with say it all too. They’re appealing. It’s something anyone might do after a long day of anything. Their drowning in enough self satisfaction to make the Greek god Dionysus take a step back.

You’re beating my heart / Speed up in the dark / My thoughts don’t stand no chance, I’m dancing too hard / One shot to unwind / Three more to deny the writings on the wall, too drunk to read it all”. – Dragonfruit ,“Know Better”

Someday, the daze will wear off and the music will stop to see what’s left behind. When you have to face the silence alone, there may be someone there to help pick you up or there won’t. Only then will we know better. 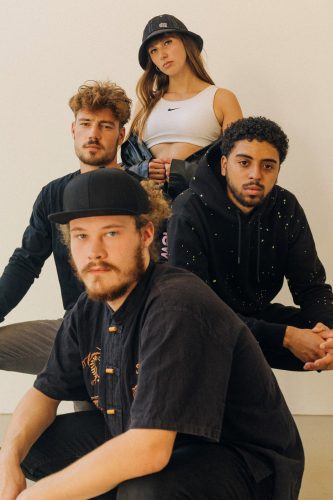 Anton: It was actually Danique who came up with the idea of trying a more electronic approach to our sound. Danique and me were just hanging out one night listening to music, showing each other the new stuff we found, and she proposed the idea of trying some more club-esque music in the likes of Kaytranada and Goldlink to spice up our live set.

Danique: Sometimes you just donʼt want to deal with your own shit. Your thoughts are too loud or too painful and you just donʼt want to know. There were moments where I pretended everything was going fine because there was no logical reason for me to feel like shit. I was busy and under a lot of pressure. But busy was good, right? I’ve really got nothing to complain about… In the meantime, I started feeling unhappy yet didnʼt allow myself to feel that. So I continued my daily life, acting like it was all good. Interestingly, my feelings of sorrow started to fight… One second I could be extremely happy, dancing in the club with friends, feeling a nice little buzz. While the next, everything becomes vague, the world moves in slow motion, my head starts pounding and it hits me: Iʼm not okay. There you are, feeling all alone in a huge crowd. Knowing you’ve run away for too long and now youʼve reached the end of the road. Different places I feel. There you are standing and thinking yeah… I shouldʼve known better…

Anton: For me it started as an experiment to see if I could push myself to make something ‘ʼDragonfruit-ishʼʼ in this electronic environment the track lives in. I did know I really liked the dark, underground club vibe of Kaytranada, but also the playfulness of some Mac Miller tracks I was listening to at the time. So I tried to combine those two and that became the instrumental of Know Better. When Danique came up with the lyrics and the track got more meaning, Sjoerd Huissoon (the producer I mostly finish and mix the DragonFruit tracks with) and myself wanted the production to also convey the feelings of disorientation Danique was singing about.

To follow Dragonfruit on their journey, you can follow them on Instagram and Facebook. Also check out their previous singles “Wasted,” “Some Say” with TRIOMPHE, and “Gears of the Giant Machine.” Be on the lookout for a project from them in the future.