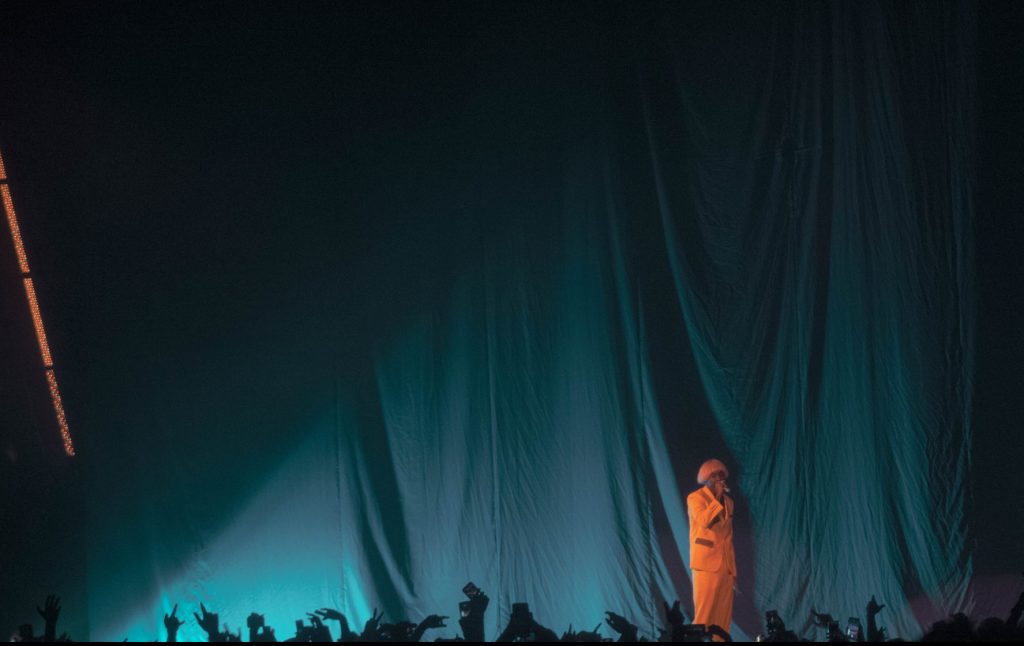 Jaden Smith. GoldLink. Tyler, the Creator – or should we just call him IGOR at this point? Settle in and prepare to immerse yourself in an unforgettable night in Orlando’s Addition Arena.

An hour before the doors at the Addition Financial Arena at the University of Central Florida even opened, a long line, made up almost entirely of college students who’d grown up on music from Odd Future, started to snake around the building. But the fans didn’t seem to mind waiting to get inside, as Tyler’s team had a cleverly placed merch truck right outside to keep the masses entertained. Even as the doors opened, the line only kept growing despite the venue doing their best to hustle everyone in as quickly as possible. Orlando was ready for Tyler.

As I walked inside, it was hard to notice anything but a sea of the colorful shirts, hats, and hoodies that immediately denote an Odd Future fan at first-glance. Every 3rd head donned a wig directly inspired by the “Earfquake” music video that Tyler dropped alongside the album’s release.

I could hear the noise before I even reached the showroom floor. Despite the palpable excitement filling the air, the floor wasn’t packed…yet. A fan with a freshly purchased IGOR shirt came up to me and asked “ this is my first ever concert, where’s the best place to stand?” Before I could reply, someone next to me spoke up: “ if you wanna rage and die, then stay in the middle and wait for the mosh. But if you just wanna have a good time, then make sure you push towards the front row.” 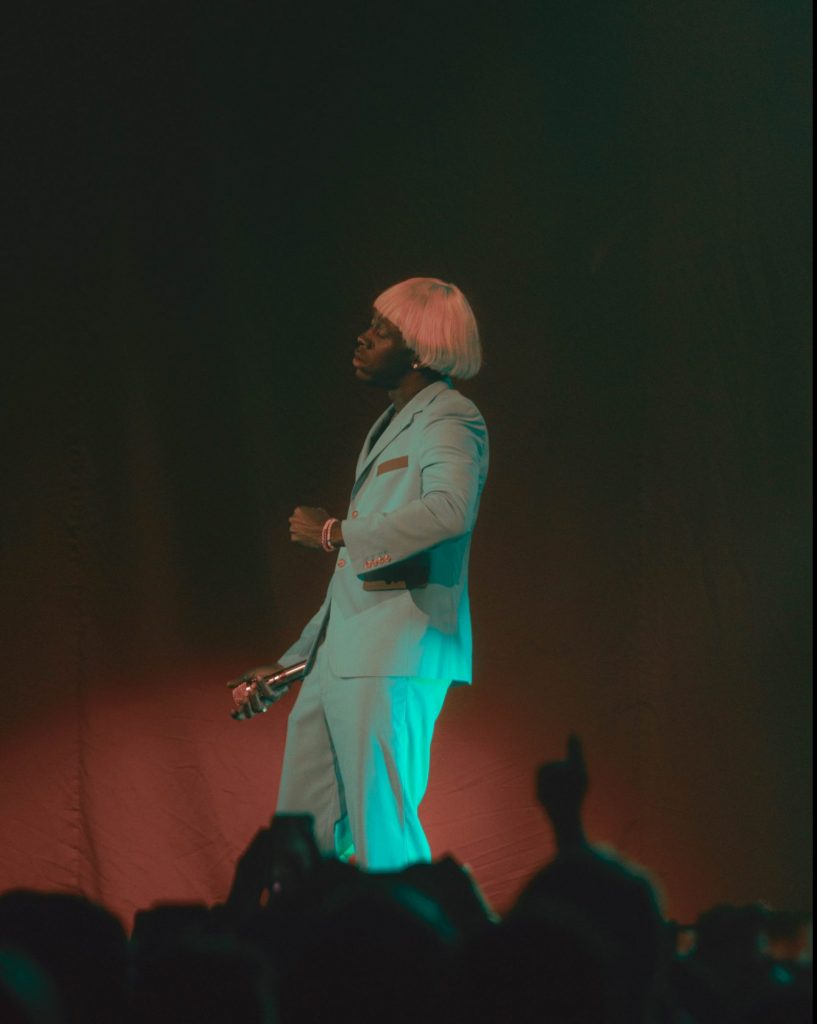 As impatience began to build among the crowd, a chant began, growing louder and louder with every iteration: “TYLER! TYLER! TYLER!” But while the crowd was hyper-focused on tonight’s entree, I wasn’t overlooking the couple of tasty appetizers we still had ahead of us.

As the lights dimmed and the chant began to die down, GoldLink made his entrance. In retrospect, his set, featuring the full tracklist from his new album Diaspora, was fantastic and his energy was the perfect warm-up for the crowd. During the middle of GoldLink’s set, he finally played “Crew” for the first time, and I joined the crowd’s wild roar as he began to sing that oh-so-catchy hook. After GoldLink finished the final track from Diaspora, he closed up shop with a back-to-back performance of “Crew”, and he made way for Jaden Smith to come on. 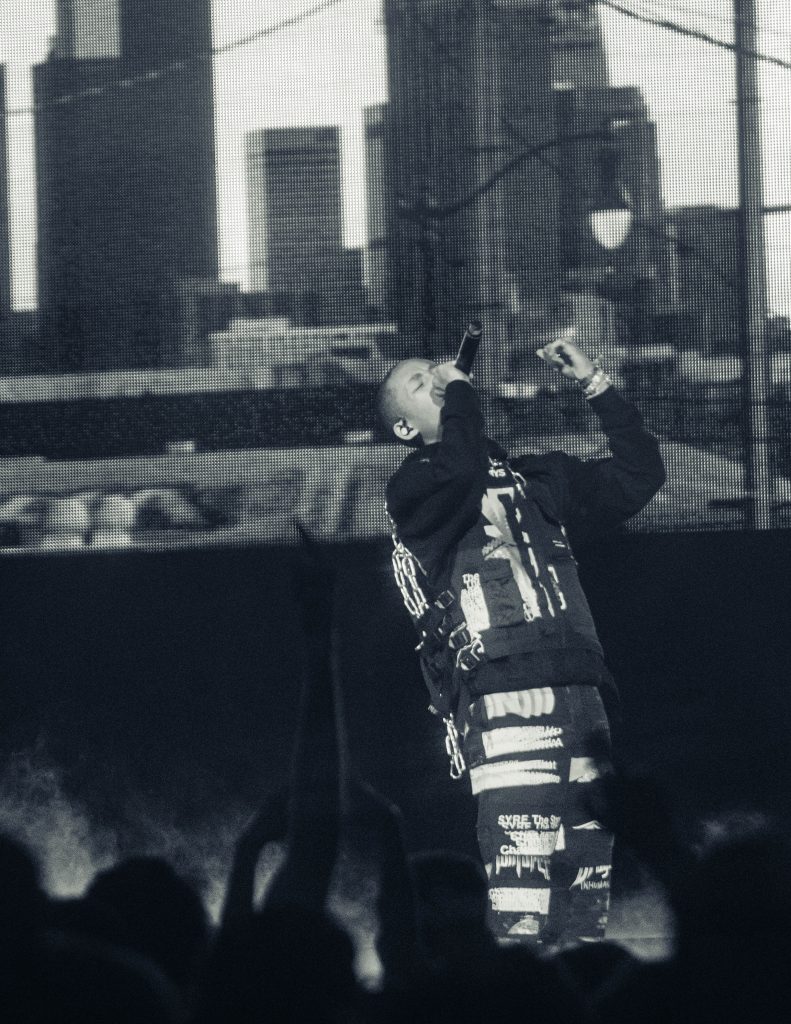 A thick fog began to build, billowing out in dense waves. Jaden Smith walked slowly to center stage, accompanied by the soft, delicate voice Pia Mia as the intro to “B” cascaded down from the loudspeakers surround the stage. Video scenes from Syre and Erys played on the giant screen behind him while he was framed by a laser show that would make any DJ proud. When the time came for Jaden wrap up his time on stage, he performed his most famous song, “Icon”, before asking the crowd if they were ready to finally see Tyler. The response was deafening.

The fans were anxious for Tyler now, high off adrenaline from the first two sets. The stage floor had filled up, and the air was filled chatter about how unforgettable Tyler’s performance was going to be.

As the start of the song “Igor’s Theme” started to play, a single spotlight shone down on a giant curtain on the stage, which reflected it brightly like aluminum foil. Tyler walked slowly and silently to the center of the stage, sporting retro shades to match his iconic ashy blonde wig. Each and every person in the crowd had their phones out, recording the start of what they knew was going to be a legendary night.

Tyler, now standing directly in the center of the stage finally broke his silence: “Running, running…” Moments later, perfectly in sync, the arena erupted to meet him: “RUNNING OUT OF TOWN THEY GONNA FEEL THIS WAY”. The stage lights begin to flicker on and off as the crowd carries the song to its end for Tyler, and the arena plunged into darkness as wild screams from 9,000 fans filled the air. 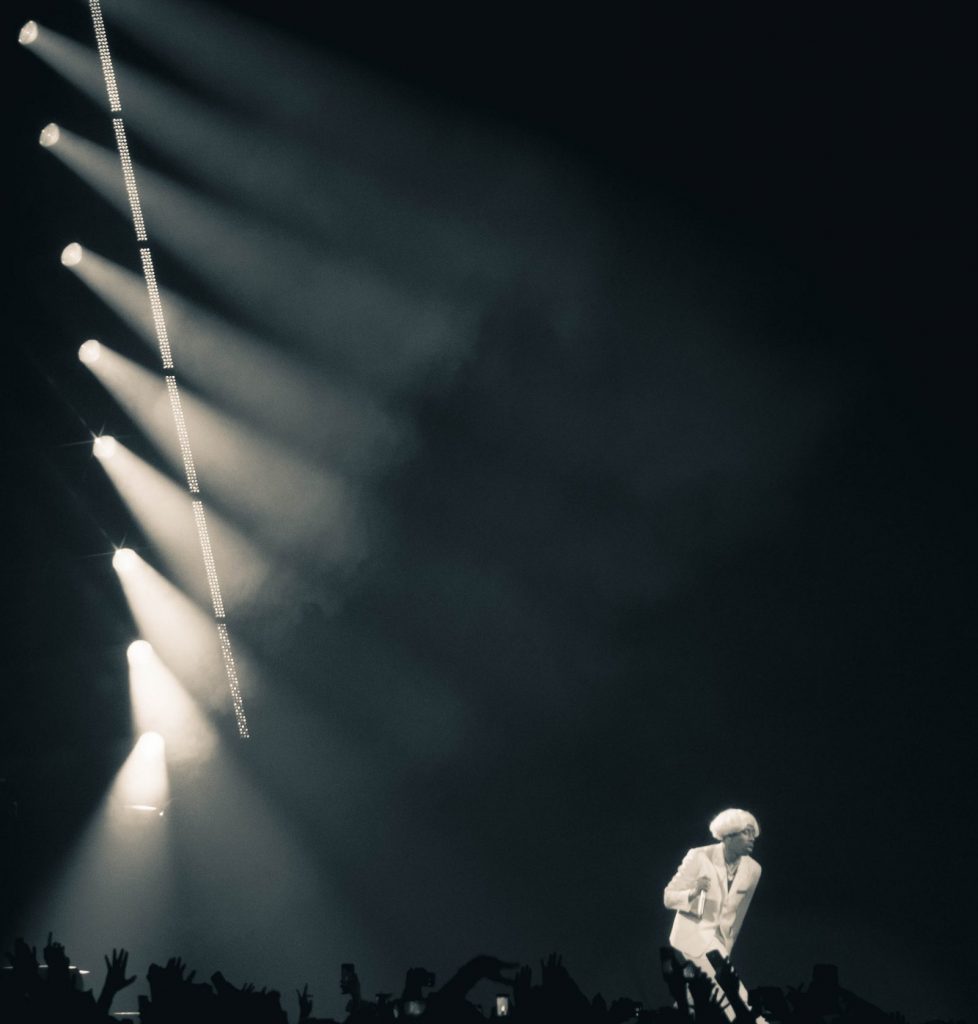 Tyler wasn’t at all afraid to interact with his fans throughout the show. At one point, he stopped mid-sentence in the middle of the stage to tell a fan they looked stupid for bringing a poster to ask their girlfriend to homecoming. Despite the costumes and new sound, this was definitely the same Tyler we’d all known for years.

“Yea I bet she fucking said yes you idiot, she probably knew you were gonna ask her. I bet yall planned that the night before while you were drawing up that stupid ass poster” – Tyler, the Creator

As the crowd broke into rapturous laughter, a layer of opera curtains drew closed across the stage to replace the tinfoil-esque backdrop that had started the show. Tyler, striking a comical figure, stared directly ahead, a rather uncomfortable look on his face. Suddenly, he turned, walking calmly toward the back of the stage before taking his seat in front of a white piano. Silence filled the room for the first time since they threw open the doors.

Tyler stretched out his hands and began the soft, melodic intro to “Earfquake”, swaying back and forth as if he were alone in the studio and the arena was miles away. As the intro continued to build, the crowd began clapping along before getting so worked up that they had to sing aloud alongside the chords drifting from Tyler’s fingers. After two full renditions of the chorus, Tyler gave the keys a rest and the song started to play over the speakers in full scope. Tyler slowly stood up and watched with a smile as the crowd sang along: “for real, for real, for real this time”. The beat dropped, and he finally danced his way back to centerstage, a golden spotlight illuminating his sparkling blonde wig. As Playboi Carti’s verse played, the stage lights fired off a dazzling array of color patterns and orange flames were projected onto the wall of curtains behind him. When the song came to its end, Tyler led the crowd in another encore, joining the crowd to sing in unison one last time. 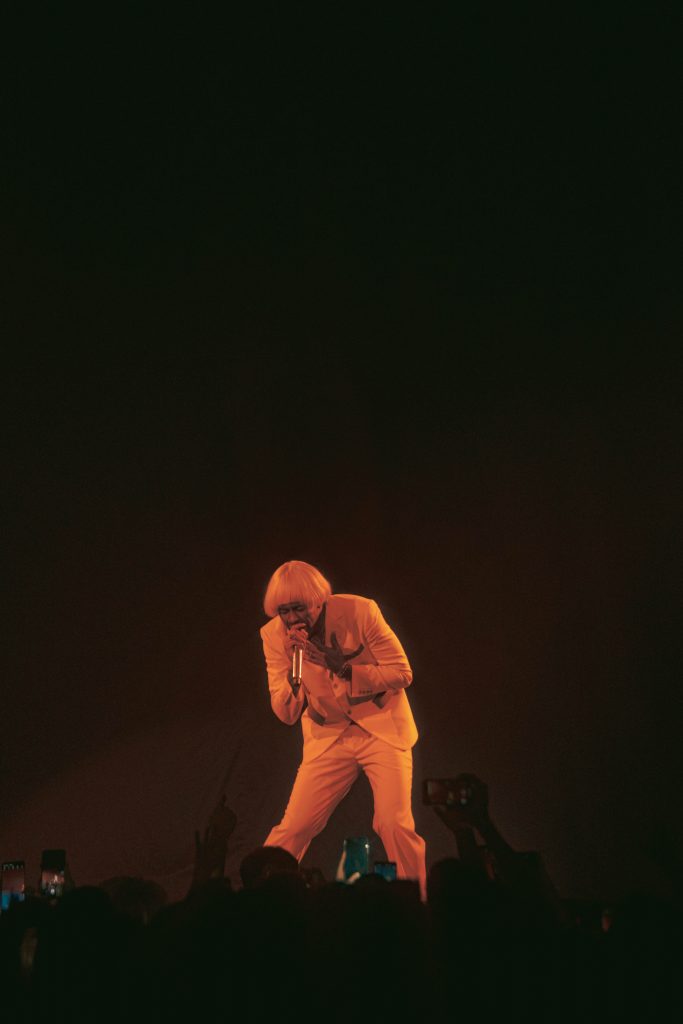 The set designers for this tour deserve so much credit because the entire stage was absolutely beautiful from beginning to end, and it changed distinctively for each new song that graced our ears.

During “911/Mr. Lonely”, a live video of Tyler’s silhouette was projected 20 feet tall onto the curtains behind him, making him seem larger than life. During “IFHY”, Tyler stood atop a platform suspended 10 feet in the air where he screamed into the mic, communicating those raw emotions that he felt, the ones that ultimately caused him to write these songs in the first place. 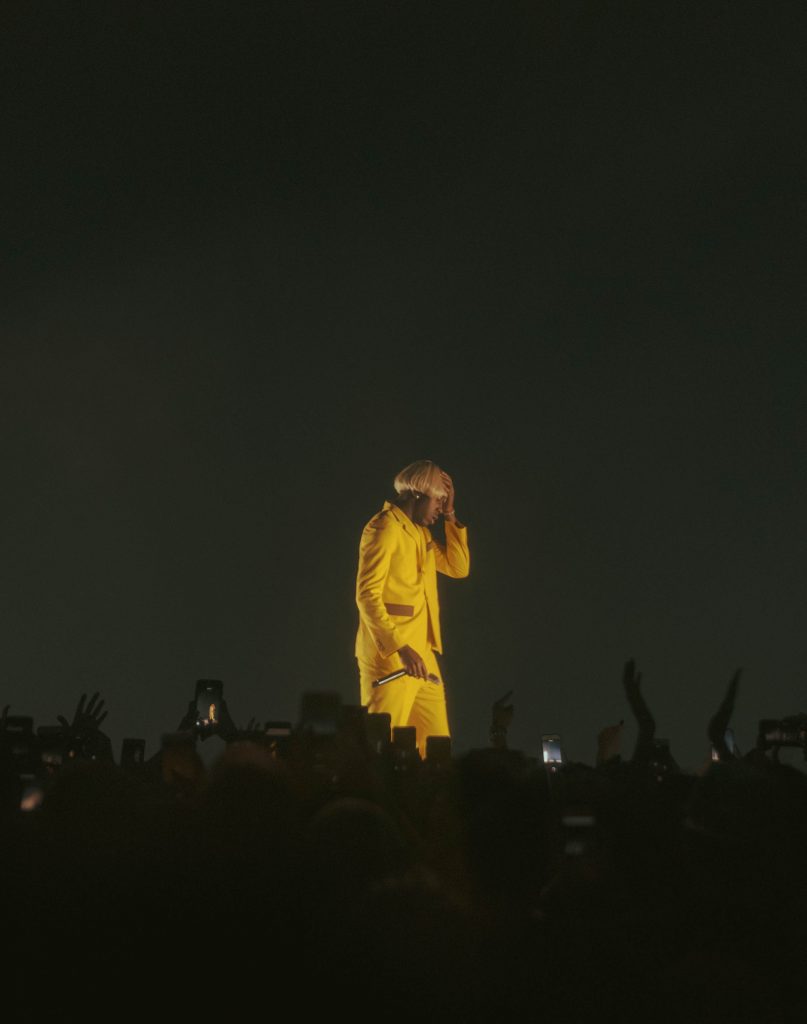 One of my favorite parts of the show was toward the end when Tyler started to perform his loosie “Okra” but stopped after just a few seconds. He took a deep sigh and confessed,

“I don’t really wanna do that song anymore, but i guess i will do it for you guys” – Tyler, the Creator

The night progressed, and Tyler continued to switch up the flow of the show with help from his incredibly broad discography. “Tamale” followed soon after, and as the bass dropped he took off into a manic rage and flung himself left and right across the stage, like he was in the middle of that very same mosh was circling on the floor in front of him. And then we heard it: that infamous beat from “Yonkers”.

“IM A FUCKING WALKING PARADOX, NO IM NOT, THREESOMES WITH A FUKING TRICERATOPS” – Every single person in the arena that day

The devilish side of Tyler that we all knew and loved from nearly a decade ago had come out to play. He pressed extra emphasis into every obscene lyric in that song. The somewhat composed performer that was on stage had completely transformed into monster, and his old fans were loving every single minute of it. 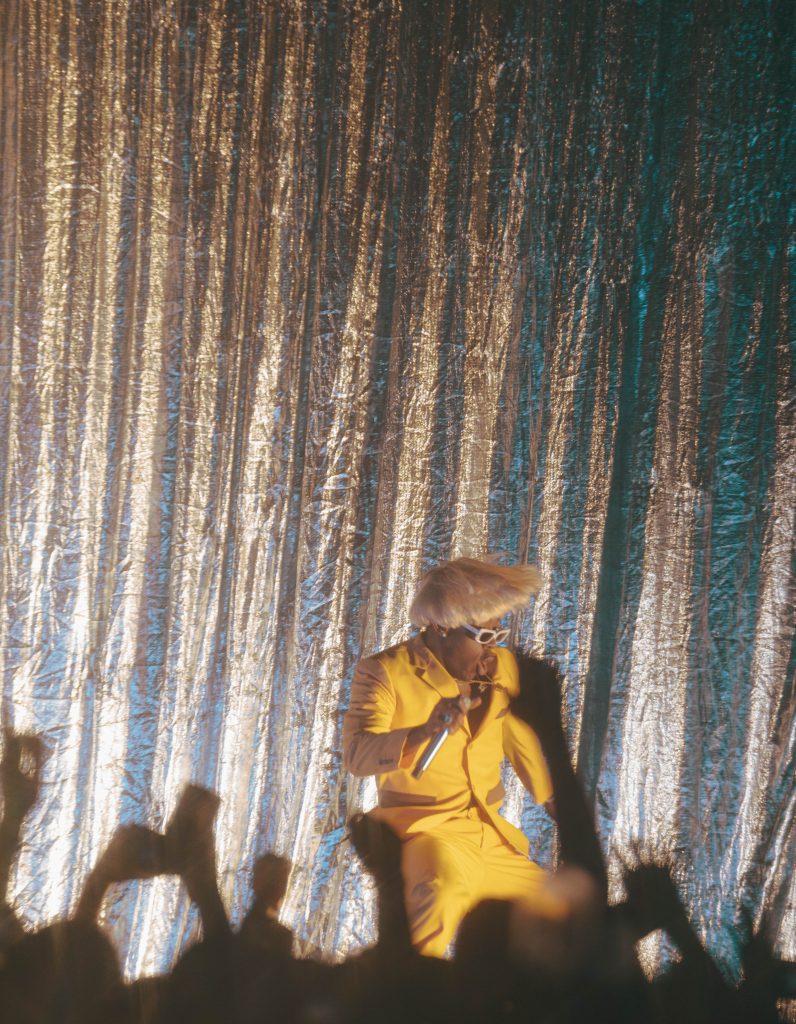 The ending to the show, just like the rest of it, was perfectly planned out and immaculately executed.

The chorus for Are We Still Friends started to play, Tyler, his entire suit a shade darker from sweat, thanked everyone for coming. He walked back onto his platform and began to ascend one last time, inviting the crowd to sing along with him. Tyler, now 10 feet in the air, faced the curtains framed by a giant projection of his upper body, waved his arms about like he was conducting an orchestra. As the song ended, the lights turned a very deep shade of blue and Tyler dropped to his knees, screaming the final “goodbye” into the mic while his platform sank to the ground. The room went completely black, save for that same lone spotlight that appeared at the start of the show, shining down on that exhausted, sweat-soaked, beloved man in a wig. He stood up sharply, took a bow, and without another word, walked off the stage to roaring applause. 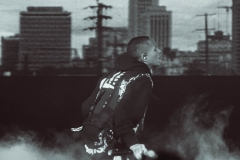 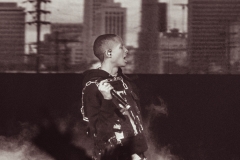 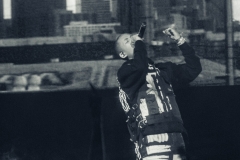 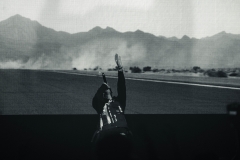 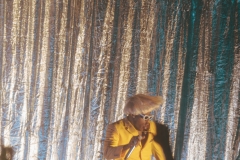 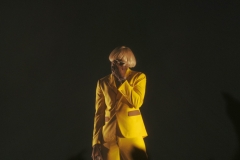 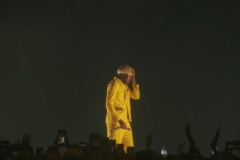 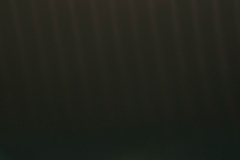 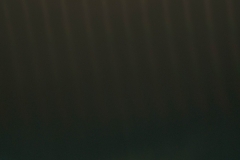 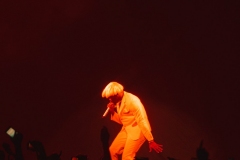 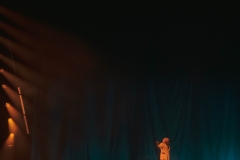 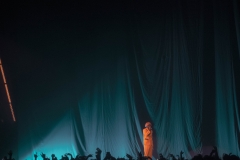 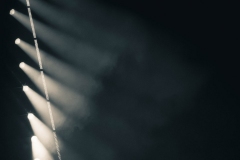 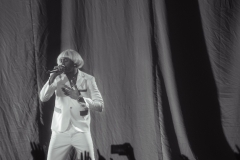 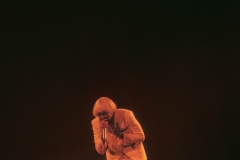 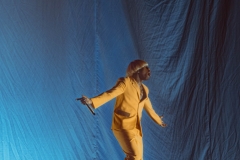 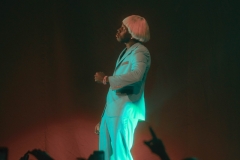 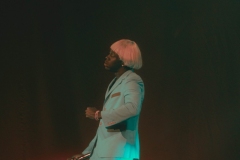