Thirty-five-year-old rapper and producer Tonio Sagan was born in Western Massachusetts, the first grandson of renowned astronomer Carl Sagan. Over the course of a two-hour interview, I got to know how the artist can be so much more than a family name, but still contribute to a legacy. Exploration of his music lead me to explore not only myself but the universe around me as well.

While I’m in this dimension and everybody’s in tune, I’d like to take a second address the elephant in the room / Yes Carl Sagan’s my grandpa but I’m not a nepotism mechanism my story’s no embellishment of the truth” – Tonio Sagan, “Old Testaments” (2019)

We don’t often think about thinking. We go about our lives morning to night, week to week, year to year full of thoughts, but there are so many concerns in our daily lives that we don’t often sit down and consider the miracle of existing consciously. Now’s the time to smoke ‘em if you got em, because a trip through Tonio Sagan’s Soundcloud, and by extension, his catalog as a whole, is not just a pleasant listening experience, but an exercise in stretching the limits of imagination.

The fastest neural impulses of thought can reach up to 200 miles an hour, still over 300 million times slower than the speed of light. Yet, while it takes light from the Sun 8 minutes and 20 seconds to reach the Earth, we can imagine ourselves standing on the Sun’s surface in a fraction of a second. Our imagination is somehow faster than the same mechanical impulses that carry it.

This ode to the immense strength of thought is attributed to Tonio Sagan’s father, Dorion Sagan, and can be found alongside the track, “Voyager Records: Greetings” on his SoundCloud page.

The track was the first highly telling glance into the sophisticated production and outside-of-the-box thinking that makes Tonio Sagan’s catalog such an interesting exploration. “Greetings” is, along with “Stranger Than Fiction,” one of two electronic tracks pieced together from samples of the sounds sent to drift among the stars for eternity on board the Voyager spacecrafts. The very same spacecrafts partially shaped by the mind of the artist’s own grandfather. Even the drums are pulled from bits of the Voyager’s gold plated record. The track is as haunting as the very imagery of drifting in isolation through the lightless void of space. The challenge of creating within parameters always produces interesting results, and in this case the outcome is intriguing and satisfying.

Tonio’s production catalog is equal parts groove and blast off. His beats are at their best when his jazzy bass lines set the pace for the verses while the spacey accents of his extraterrestrial groove lift the listener off their feet. His new single “IK Hours” is the perfect example of how the electronic influence of work like the Voyager tracks bleeds into his psychedelic brand of hip-hop. 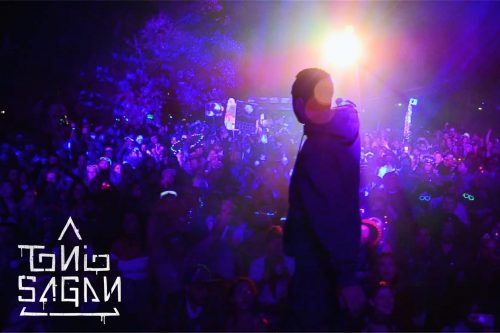 More than a Sagan

From a young age, Tonio grew up in a family well versed in pushing the boundaries of imagination, from a scientific perspective, a creative perspective, and the often under-recognized intersections of the two. If the name Sagan rings any bells, it’s because Tonio’s grandfather is Carl Sagan, the most well known astronomer in the world before his passing in 1996. Tonio’s grandfather is author of a vast catalog of his own, such as the science-fiction novel Contact and the immensely popular television series Cosmos: A Personal Voyage; the former of which was made into a 1997 film starring Jodie Foster and Matthew McConaughey, and the latter remade into a modern Netflix adaptation starring Neil Degrasse Tyson in 2014.

In Tonio’s own words, “I think one of the reasons my grandpa was embraced by our society is because he made complicated concepts accessible to the average person. I think in a way that can be done with music too.” Despite the complexity and stature of Carl Sagan’s work, he made incredible topics like the origins of life and humanity’s role in the universe digestible by everyone at a time when people had to prioritize more immediate concerns.

Given the scientific and philosophical content of Tonio Sagan’s raps and production, as well as his familial background, a deeper dive into Tonio himself doesn’t quite unravel as expected – much like the universe itself. In conversation, Tonio gives off a respectable aura of humility. It’s not his grandfather’s legacy that he wants to be tied to, but the merit of his own work. It wasn’t until just four years ago that Liquid Stranger, a popular DJ Tonio has previously worked with, helped convince him to even make music under his real name.

Related Sauce:   Why We Like It: Riley Writtens’ “Talking To Myself”

A name like Sagan carries a lot of weight for a young kid. The heightened expectations of teachers and educators who were aware of his family background caused Tonio to push back against the added pressure. As a kid and a young adult he got into some trouble and even dropped out of high-school before eventually obtaining his GED. However, his well spoken demeanor and air of intellect is testament to the validity of more than one definition of education.

He was raised primarily by his grandmother, popular evolutionary theorist Lynn Margulis, and his father Dorion, but his grandfather Carl passed away when he was only 10. One of the things Tonio remembers was Carl’s genuine curiosity in asking him for his thoughts and opinions on topics. “I think he was genuinely interested in what my opinion was because I was so fresh to the world and unbiased… When you’re a kid and an adult asks you what you think about an adult issue it stands out.” 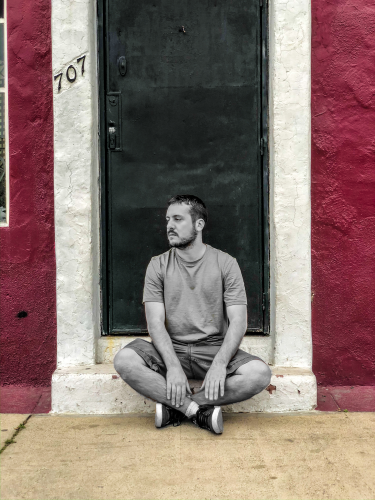 His grandmother would often read poems by Emily Dickinson in a way that younger Tonio could appreciate even if he was getting into trouble. The way that Dickinson is able to poetically weave her unique perspective on life so succinctly with such few words could be seen as one inspiration for the dense intensity of his own writing.

Coming from a family of writers Tonio always understood that he wanted to do something with words. He started writing at a young age, even though he wouldn’t have found the connection between his family’s scientific novels and his raps if you’d asked him at the time. While he started writing songs around age 10, the musicality of his craft didn’t come around quite as easily until he was older.

Interestingly enough, one of the earliest critics of young Tonio Sagan’s work was Kurt Vonnegut, author of the grim and satirical best-selling novel, Slaughterhouse-Five. While neighbors in an apartment building in Northhampton, MA, he approached the cynical cigarette smoking author in the complex courtyard and pitched their original hip-hop performance. In a very Vonnegut-esque way Tonio was swiftly informed that he hated it.

The influence of sound

Even now criticism holds importance to Tonio, who is often a focused critic of his own work. The first track of his that pulled my attention through our SubmitHub page was the ominous music video for “Message in a Bottle Pt 1.” Donning a NASA shirt and featuring more of the spacey production that highlights his catalog, he paints a sinister picture of the world while rhyming over a rich bassline. I was drawn into the choppy flow created by his repeated use of longer multi-syllable words, but Tonio criticized his word choices as making the track less accessible to the listener.

In a way, Tonio’s criticism of his own work echoes the sentiment about his grandfather’s ability to bring complex thought expanding topics that inspire wonder. On tracks like “Rise” he achieves the same effect without the use of the “$1000 words” he refers to on “Message in a Bottle Pt 1.”

He points to the line “So what, my soul doesn’t glow in the dark / Every galaxy’s got a hole in its heart” as meeting his lyrical goals. The bar is simple enough to understand, but is also based in the nuance of every galaxy being centered around a massive black hole. The bar points out that his soul isn’t perfect or shining from whatever mistakes he’s made, but how can anyone judge another’s soul when the core of our existence literally revolves around a force that could destroy us. The comparison suggests that our souls live similarly close to the precipice of destruction, but we’re not any less valued just because we can’t be naturally all bright and shining on the inside.

Related Sauce:   Why We Like It: Hare Squead’s “Minor Gangsters (Gully)”

Allusions present throughout Tonio’s work make for more than just clever lyrics, but inspiring thoughts. While his family made respectable progress projecting their minds beyond the planet to make great scientific and philosophical divinations, Tonio explores these thoughts with verses and sounds. Through a concept called cymatics he explained just how powerful that the music we make can be.

In short, cymatics is the process of visualizing sound through vibration. When the 808’s get to bumping, you can physically observe a sub buckling and surging under the influence of sound. Even the carefully selected alien mixtape we sent to the universe on board the Voyager can’t be heard in the vacuum of space because matter must exist to transmit a sound from its source. Just as music needs matter to be heard, sound can in turn influence matter. Creative technologist Evan Grant says through cymatics we can “unveil the substance of things not seen” like music. Most commonly replicated by spreading sand on a plate that vibrates at changing frequency, sound is given form by the complex patterns that emerge as the sound changes. The music played has a physical fingerprint in matter that develops from its unique sound.

If we can imagine then, the immense sound involved in the creation of the universe, it becomes possible that sound played a significant role in the physical formation of everything we know: a theme present in many religious origin mythologies, including Christianity. “In the beginning was the Word, and the Word was with God, and the Word was God” (John 1:1). Considering the influence that cymatics shows us sound can have on the world, music too carries the power to impact us and the world around us in big ways. 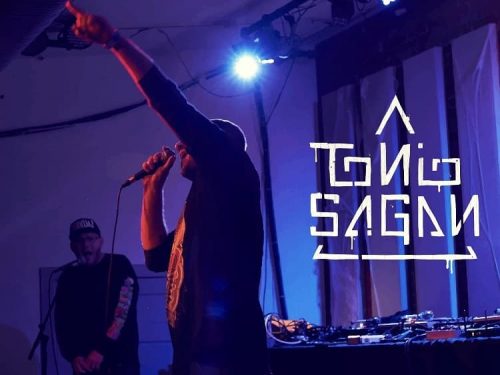 Between our “brief” two hour interview and my dive into the music Tonio has to offer, I felt reenergized and inspired to expand my thoughts beyond the typical pattern of work, relax, sleep, repeat. Tonio may not have taken the same professional path as his grandfather, but he meets similar end results. One doesn’t have to know precisely the mass of a black hole or the formula for probability of life on another planet, or even hold a diploma in order to inspire the excitement that makes people stop and think about the origin of the universe and our place in it.

As found on Tonio’s SoundCloud, in the words of his father, “human consciousness shapes not only the present but the past as well. The past of course affects the present and future. But so may the present—what we do and the music we make—affect the past and future.” The real effect of imagination and the formation of our thinking is so much more powerful than what we see in the short term results. Imagination puts us on the surface of the sun faster than the same electronic signals that make up the process behind the idea. We can’t physically see the thought, but cymatics shows us how incredible an invisible influence can be. The work of artists like Tonio Sagan encourage us to break the boundaries of our imagination by showing us the invisible. He follows in the footsteps of his grandfather, but to say he fills his shoes would be disingenuous, as Tonio Sagan paints a picture entirely his own.