CentralSauce » Why We Like It: Tia Nomore & Stoni’s “Skirmish” 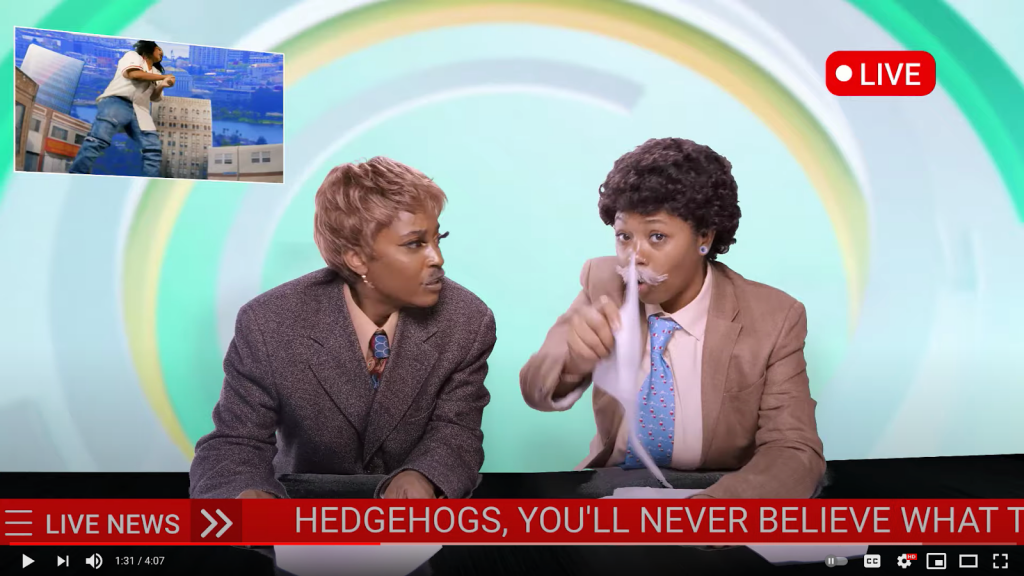 “Skirmish” didn’t just appear in our SubmitHub inbox a week or two back – it burst through the drywall like the Kool-Aid Man or a wayward sports car, complete with the shock and awe. That’s owing to the explosive presence of Tia Nomore and Stoni, two emcees that come out the gate with brash bars and confident asides that pair with a bouncing beat. In short, charismatic chaos.

You can’t break hip hop down to discrete categories.

There are no boxes you can tick, or elements you can introduce, that’ll give you a surefire pass at gold or glory. Impossible though those metrics may be, there is quality that stands tall above the rest as the most mysterious of additions, both unfakeable and wholly unmistakable. You probably already know where I’m heading — it’s chemistry. “Skirmish” dishes that valuable asset out like it’s a dime a dozen.

It’s no real surprise that Tia and Stoni make such a great team: their mutual wavelength is one of fierce individuality and resolute self-belief. “Everything that come to me, I know what to do with it,” says Tia with confidence that proves as much. Even as she’s viciously deriding her competition she’s finding ways to hail her own success, the verse coming to a close with a sharp reminder: “since it’s all on me, I’d double your bets.” She’s got jokes, too — “finna put my brother on like I’m Damon Wayans,” pegs her as that ride-or-die with the sharp one liners.

That’s an attitude Stoni can match, as unapologetic even when she pierces the veil. “I should get a shrink and tell ‘em why I never sleep, and why I’m always drinking and I’m smoking on that potent,” she effortlessly rattles off, a moment of potential vulnerability flipped to yet another shameless flex about living hard and fast.

Tia and Stoni might hail from one of hip-hop’s most storied cities, but as they wreak havoc on The Bay in the truly unchained music video, you just about believe that few could rival their reign of terror. The news anchors in the video might be closer than they think when they speak of the “gargantuan bitches” terrorizing Oakland — Tia and Stoni are a big deal in more ways than one. 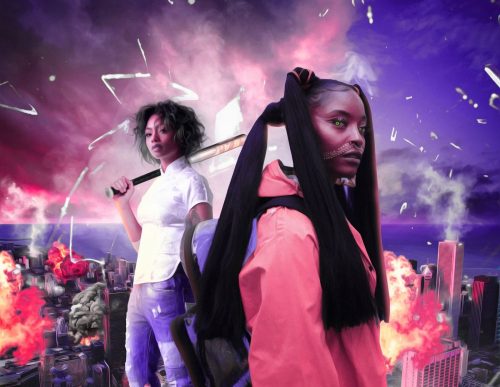 From Tia Nomore and Stoni

Tia Nomore: Stoni and I are both from the Town (Oakland). So real Town girls will inevitably link up and be reflective of one another — and so it was! “Skirmish” was a track Pat Brown had played for me. Normally tracks that Pat makes are hella based and intriguing. I always find them challenging in an inspiring way. I remember having a verse on it and the next time I heard it again he mentioned wanting to put Stoni on it and I agreed that she would most certainly whoop on a track like that — and she did! I love Stoni. I know that she will always deliver and arrive as herself and herself only. As far as the content, shit — it’s regular haha!

Stoni: I’m pretty sure I met Tia through mutual friends a few years back. I can’t really remember the details. I got invited down to Text Me Records (out of Different Fur Studios) for some writing sessions and we did “Skirmish” the first day. It was basically already done, it just needed a hook and another verse. I knew for my first time writing with them I had to be impressive so I didn’t hold back. I wanted to impress them because I have hella respect for their craft and I wanted to let them know I take it just as seriously.

More From Tia Nomore and Stoni

“Skirmish” is an interesting collaboration, in that it combines a fresh-faced debutante with an experienced Oakland emcee. Tia Nomore represents the storied side of that partnership, with two records – 2019’s Level and 2018’s Gooney Tunes — to her name, as well as a string of singles such as “Hyphy,” “Waterfalls” and “Suck It Easy.” You might be able to keep up with Tia on Instagram, Facebook or Twitter, but be warned — she sets a mean pace.

Stoni’s headline billing on “Skirmish” marks her first official release, but it’s certainly not her last – in fact, in the space between the release and this very piece, she’s appeared on “Brand New Feeling,” a track cut with Ricky Lake and “Skirmish” producer Studio_Dad. That’s a powerful one-two of an arrival, and there’s surely more to come — follow Stoni on Instagram and Twitter to bear witness!