CentralSauce » In Conversation: Are Scammer Raps Up Next? 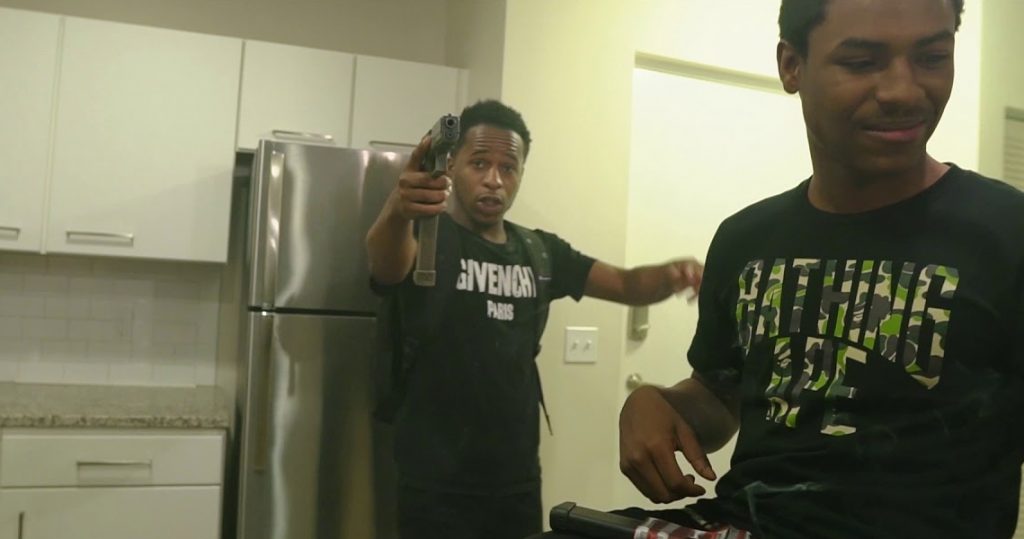 “Dynamic Duo” by Kasher Quon and Teejayx6 hit YouTube on June 18 and made more than a few ripples for its unique absurdity. We decided to sit Edward and Nigel down to make sense of the 4 minutes of carefully detailed Scammer Raps and “Givenchy” emblazoned braggadocio.

Edward (@EdwardAlexandrr)
Yo Nigel, it’s been a minute. Haven’t done one of these since we were both trying to explain to the world how good the Solange album is, so you know if we’re in the Google Doc going back and forth, something good is happening in music again. This time we leave the humid Houston heat and find ourselves in Detroit.

I watched this video and saw you watched this video, and the first thing we said to each other was “this shit is crazy” and the next thing was “meet me in the Doc.” So here we are. I’m just going to start with the hardest question: what is the wildest thing you heard Kasher Quon or Teejayx6 say in “Dynamic Duo?”

Nigel (@Tribecalledni)
That Solange album was fun to talk about, but discussing Kasher Quon and Teejayx6 might be the best thing I do all week, July 4th included. Picking my favorite line from this Detroit tag team is what I imagine picking your favorite child is like. It’s too hard to decide because every line has something about it that I love. But if I had to pick one, my golden child, who I’ll love, care for, and spend dumb amounts of money to support, it’ll have to be Kasher’s line towards the end of the song, where he says, “He called for a Hi-Tech, hit em with dish detergent / Cause n****s try to drink lean without a purpose.” It’s perfect. Kasher is poisoning his clients and thinks he’s doing them a favor.

YOO, this is one of my favorite spots in the entire damn thing. In the music video, while he raps this line, he deadass picks up a bottle of dish detergent and pours it into a cup. These two are really just broadcasting their scams, someone is at home right now watching this video thinking “I really bought dish detergent at Hi-Tech price from him.”

“Kasher is a trapper and Teejay is really a scammer: what happened to the internet for posting scamming instructions on YouTube to become a legitimate marketing strategy?”

The level of scams these two pull off in this song is unreal. I know you must have two or three favorite lines, but give us your golden child.

I’m going to cheat and give you two lines, my golden children are twins I guess. Before I get to the actual lyrics, we need to talk about the accuracy of this song title: they really are a dynamic duo. There are points in the song where they finish each other’s lines/sentences/scams and you step back and can really see them walking down Detroit scamming everyone. My favorite lines show up when the duo reaches synchronicity, Kasher starts, “Stingy like Mr Krabs when it comes to my sauce,” and then Teejay pops in “Got chased by a fat mall cop it looked like Rick Ross.”

As ridiculous as these lines are and this whole song is, it very much tracks with all of the music they’ve made. Kasher is a trapper and Teejay is really a scammer: what happened to the internet for posting scamming instructions on YouTube to become a legitimate marketing strategy?

Honestly, what better place to learn how to do anything than on the internet? Cooking, changing the oil in your car, and scamming are just a few categories on the world wide web’s Udemy. The funny thing is that Teejay’s YouTube has become a literal hub for select scammers who stumble upon his music.

Teejay’s “Swipe Lesson” is less a song and more a 2-minute lesson on one of his schemes. Like moths to a flame, the comment section under this track on YouTube is filled with possible scammers. Some say the method Teejay lays out is now dead, others say it just worked for them last week, and some are actual scam comments asking you to follow them on Instagram for flips. I remember the detail trap rappers like Young Jeezy, Pusha T, and Gucci used to describe their movements, but Teejay and Kasher have taken the cake.

“Swipe Lesson” is so wild, because, you’re right, it doesn’t even really feel like a song. It feels like a lecture on the first day of Scamming101, but the professor is lecturing over a beat. This hyper-specificity is something passed down from the beginning of rap, but Teejay is pushing boundaries. Thinking back even before trap, you had guys like Too $hort in the Bay or Scarface in the South retelling what they were seeing with such vivid detail, emotions were delivered and scenes were set.

Teejay and Kasher care much less about the emotional weight, they gravitate more towards the “what’s the wildest thing we can say” school of thought. But i’m not sure i’ve ever heard anyone, anywhere, outside of Reddit, talk about VPN’s with as much affection as Teejay does on songs like “Dark Web.” Are VPN’s about to be the next big thing in rap? If Sada Baby is rapping about VPN’s in a month we know what everyone in Detroit is on.

Teejay rapped that he pulled Tony Parker’s social security number, and that flex might as well be Sada Baby telling us he has a brick of white that looks like Brock Lesner.

Like Eva Longoria’s ex-husband, Tony Parker?? Champion with the San Antonio Spurs, Tony Parker?? These guys are really on another level. (Also Sada Baby is a genius and doesn’t get the respect he deserves.)

“This song makes me wonder if we’re witnessing the origins of a new category of trap rap where, in a world of guns and butter, the butter is bitcoins on a secured VPN instead of tightly wrapped packs on a corner.”

Yup, THAT Tony Parker. Sada, Teejayx6, Kasher, Drego & Beno, 10kkev, and so many other underground Detroit rappers are building an identity of wild raps that seem too wild to be true, but would anyone think about pulling Tony Parker’s social security number unless they really pulled Tony Parker’s SSN? This song makes me wonder if we’re witnessing the origins of a new category of trap rap where, in a world of guns and butter, the butter is bitcoins on a secured VPN instead of tightly wrapped packs on a corner.

That’s a weird thought. I think, truthfully, this is just an extension of what we already have in play. It feels less like something new is being made, and more that old patterns of rapping are being adapted to the modern world. They didn’t have VPN’s to scam bitcoin with in 2005 when Jeezy dropped TM101. It would be weird if scamming, and making money on the block didn’t change a bit overtime. But I will say, when the global economy crashes and we’re relying on cryptocurrency, Teejay is about to be rich.

I’ll make a bold prediction: scamming as a viable trap rap flex will soon become the new norm. Guapdad4000 is doing similar things over in the Bay Area, City Girls rapped about scams in their monstrous hit “Act Up,” and now we have Teejay and Kasher taking it to extreme levels. Rappers are only getting younger and more tech-savvy.

I always knew our kids would be waayyy more tech savvy than us. I figured that would give them an advantage in knowing how to code, but not in understanding what rappers are talking about. If, in 20 years, all the new rappers are talking advanced ways of scamming and I can’t understand them but have to act like they have bars like I did with Ghostface for so long, I’m holding you personally responsible.

I do think this only happens once some of these artists blow-up. And that, unfortunately, doesn’t often happen until we get white kids in Nebraska to bump “Dynamic Duo” in their high school parking lots. Thank God Uncle Luke already fought the government for the right to say whatever you want in your music (even if some rappers are still being targeted for their lyrics), if not Teejay and Kasher would be headed straight to prison, because once these guys achieve a little more notability, white parents all over the country are going to be very confused why their kids are typing “VPN,” “torbrowser,” and “Zelle scams” into their google searches.

Ok we can talk about how absurd this whole thing is forever, but at some point we gotta let the people off this webpage so they can go try the “Swipe Lesson” hustle themselves. So, let’s end with this, give me another bar or moment you can’t believe happened across either Teejay or Kasher’s discography? For me it has to be in the music video to “Profiles” Teejay is sitting at a computer with 10 credit cards on the table. That’s a scammer.

Tucked between their moments of scamming are moments of actual humility. Teejay rapped, “Grandmom was ‘bout to beat my ass cause I stepped in her garden” on “Apple.” We couldn’t find how old these two were, but if anything makes me think these are full-on kids then it’s that line. It’s that type of absurdity, along with unreal levels of scamming, that make these two so enjoyable. They fill “Dynamic Duo” with so many lines of this type of absurdity that the beat can barely hold them.

I see a ton of potential in their content, and out of some of the new acts I’ve seen pop up, I’ll make sure to keep a keen eye on Teejayx6 and Kasher Quon. If scamming ever becomes an everyday topic in mainstream trap rap, we can look at those two as one of the early catalysts.