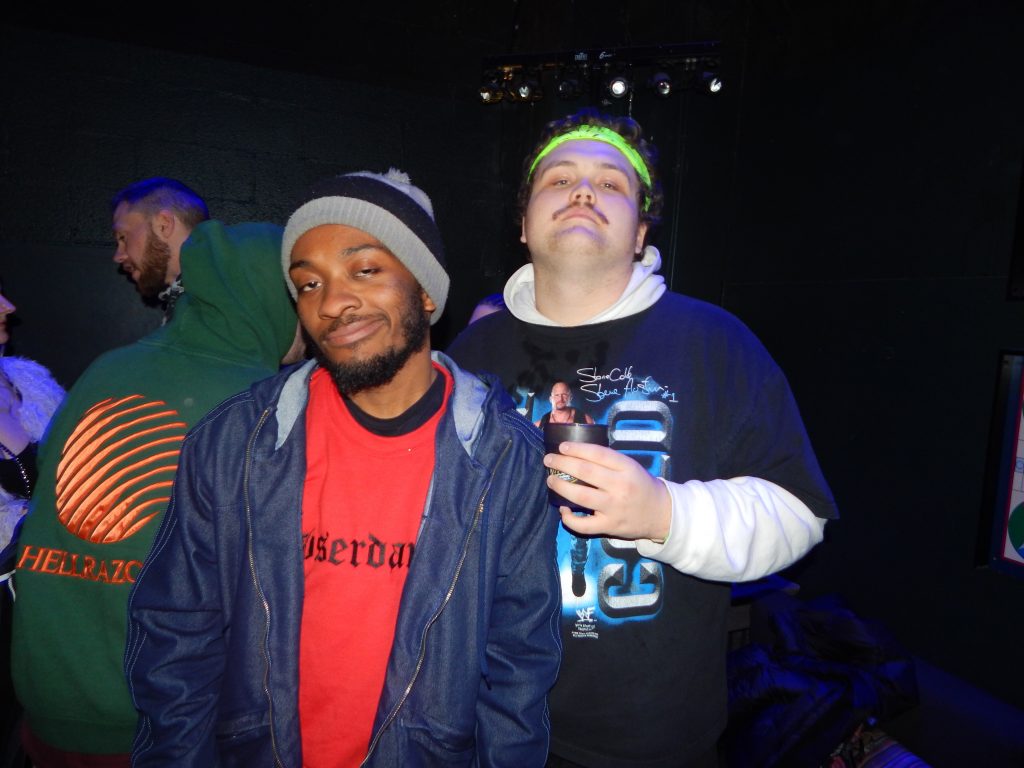 In the integrity of full disclosure, the two members of SlumBums, rapper $tew and producer Kodiak, are good friends of mine from University. I had the pleasure of spending a few years watching them grow as artists and friends first hand. From mixtapes about Brisk Iced Tea and DJing house parties to the release of their basement-studio album, All Gas No Breaks, I’ve watched their relationship with music evolve from a hobby, to a unifier and a passion. Their new single, “Possessed” is evidence of that passion and a track I had to share with readers. It’s not often a journalist gets this close to the progression and development of something with this potential, and for that I feel blessed.

Am I Mr. Krabs in the first half of season one, episode forty? Because I’m freaking out about THE HOOKS! There’s a lot going right in “Possessed” but I’m coming back for the dopamine release of that intoxicating hook. The track kicks immediately into Kodiak’s distorted voice, coming off a minimalistic intro that would sound at home in the soundtrack of a slasher film. The notes have the same effect: something is about to happen. The bass kicks in at the same time as the vocals, the result is a sudden jolt into the world of SlumBums.

The bass is ear shaking. It took me a minute to figure out just why the low tones were so powerful. It’s almost impossible to try and distance the production and the vocals in my head to isolate Kodiak’s special ingredient. This is where the magic happens. The hook is so aggressive and up front that you don’t consciously acknowledge just how many small touches have been put together in the hypnotic bassline. What’s picked up as individual bass notes is actually comprised of layers of reverbing sound. The layering brings the track a feeling of vibration. Every inch of “Possessed” feels alive beneath, compelling $tew and Kodiak’s berserk mode delivery.

Related Sauce:   Why We Like It: Lxnny’s “Lamborghini Racers”

One of the strengths of SlumBums is the cohesion with which two very different artists are able to bring their tools. As a producer Kodiak takes inspiration from Kenny Beats and Flying Lotus, but rather than having the resources to adapt his beats to the styles and sounds of multiple different artists, the duo’s main rapper, $tew has to adapt his own style to a plethora of different sounds. On “Possessed” $tew takes on the challenge of bringing the high-energy track home.

Living up to the concept of possession, the SlumBums’ front rapper $tew doesn’t let the crowd shaking roll out of the track slip for a second. His syllables are on point, falling in and out with the reverb effect of the production. Getting into the pace of a beat like this takes its own concentration, and I can just imagine $tew in the booth completely zoned in, consumed by the verse from start to finish. Coming in and out of that kind of headspace alone is as intoxicating as the production. “Possessed” reaches out with tendrils that threaten to hook the listeners with the same hypnotic consumption as the artists behind the track.

To me, I guess it’s like embodying the energy that the shit you’re on is other worldly. I love performing this song because we get the looks the songs talk about, where people are confused by how hard we’re going.” – $tew for CentralSauce (2020)

I agree. we’re not flashy, or looking for any clout, or generally ego-centric. That’s why we’re “SlumBums”, we make music to have fun and let go of all those preconditions and hope the people who listen can do the same.” – Kodiak for CentralSauce (2020)

SlumBums’ album All Gas No Breaks is a great dive into the range of sounds that Kodiak and $tew can tackle. If you liked “Possessed” check out the track “DIRTY DAN” that has a similarly aggressive live show sound to it and some of $tew’s best verses. On “OH NO” you can really hear the influence of Kenny Beats in Kodiak’s production through the texturing and layering of a beat comprised from a sitar sample. The song “YEE YEE” shows the tight friendship within the duo through a stunningly intense harmonica beat over $tew’s bars about culture shock moving from Chicago to the more rural Midwest. Follow Kodiak and $tew on Twitter to stay up to date with new releases.