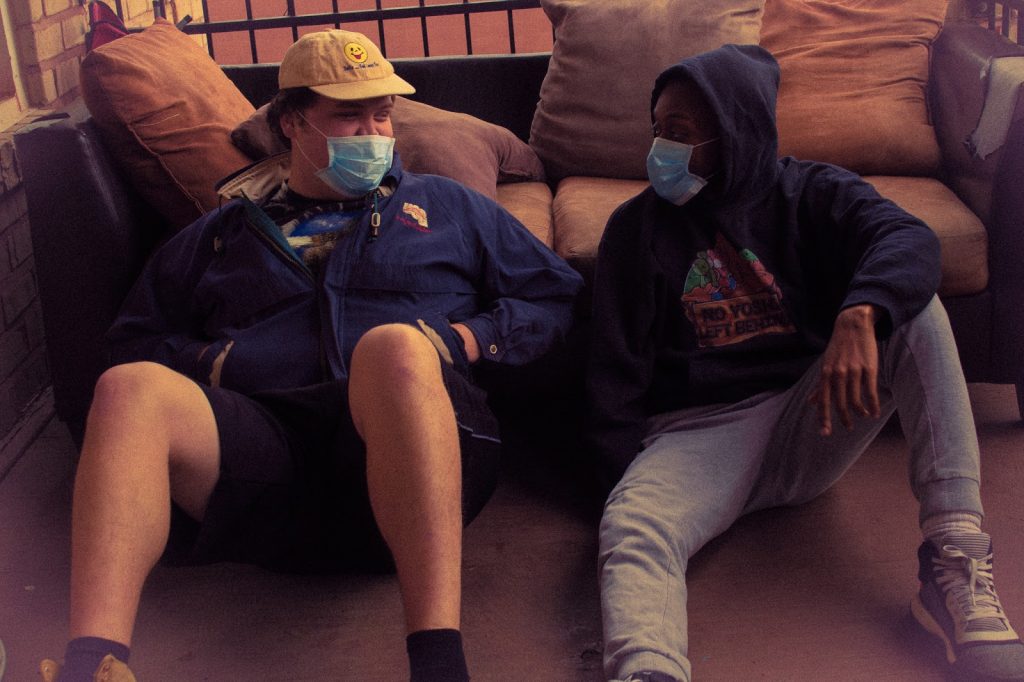 $tew and Kodiak are back with their first full project under the name SlumBums. I previously wrote about “Possed” the hypnotic lead single from the album, Life is Strange, and this time I’m breaking down the stand out track, “Hanta Yo!”

I have the blessing of knowing these two artists personally. In years growing poignantly distant, I was a college housemate to each of them at one time. It’s a unique relationship to so closely see the growth of an artist. I first met a kid with SoundCloud mixtapes about Brisk Iced Tea and then a house party DJ with (allegedly) pirated software and a will to produce his own music. Separately, the two creatives had more time spent in classrooms (read: clubs) than in the studio, but steel sharpens steel. Together they turned a hobby and a pipe dream into a strategy and a checklist.

SlumBums is more than a clever moniker gathered from the conveniently located but aptly dubbed J Slums, where the pair lived and recorded Life is Strange during lockdown. SlumBums is a state of being — the acceptance of who you are and revelry in the discovery.

For budding creatives, one of the first and most difficult barriers to break through is the contrast between internal recognition and external validation. It’s too easy to find ourselves chasing the latter to fulfill the former in a world of talent quantified by clicks, likes and streams. As a friend and fan of the music I make a conscious effort to put the pedal to the floor when it comes to encouraging anyone in my circle because I know first hand what it feels like to run on empty. However, when I caught up with the boys over a bottle of Jim Beam to talk about “Hanta Yo!” and the new album, it was the SlumBum mantra that put the gas in my tank and has stayed at the back of my mind ever since.

Related Sauce:   Why We Like It: Jennifair’s “Living the Life” (Ft. Drum Mage)

SlumBum producer and emcee, Kodiak, tells me that “hanta yo” means “clear the way.” It’s a phrase his high school football coach used to tell his players to take charge and lead the pack. Although his team ended the season 1 and 9, putting a bit of a different context onto the saying. It’s easy to lead with confidence when there’s no obstacles in your way, but it takes a special kind of fierceness to clear the way of said obstacles, and that’s the SlumBum mentality. The tag team emcees steamroll ahead through all obstacles because to them success is defined by one question: “Is this one better than the last one, and will the next one be better than this one?”

The production for “Hanta Yo!” teeters back and forth on precarious energy. The beat is propelled with the tension of wound up springs exploding from their constraints one after another. $tew eases the tension with a playful flow that cuts the beat with humor. “Yo’ shawty not at work,she at my crib getting laid off / ask her how was work she say she had a great day off.” As an experienced actor, you can feel the stage presence in his delivery. It’s not just about what he’s saying but how he’s saying it. There’s careful consideration for the emphasis of each syllable that keeps his flow dynamic and his punchlines hitting. While $tew’s verse digs into the beat, Kodiak’s floats above it. His delivery excels in timing, a natural feeling that must come with rocking his own production. A dull SlumBum bar does not exist.

I chop it up like surgery, who let me do this? / Someone gonna turn on me, who is my Judas? / I got drip without the fashion on, I’m going nudist / Take my anger out in eight bars, I’m going Budhist.” – Kodiak, “Hanta Yo”

Jay-Z once compared braggadocio rap to love sonnets. Just like Shakespearean poets compete for different ways to describe love, braggadocio rappers are challenged to constantly reinvent ways to flex. $tew and Kodiak might have a way to go before their lives are as flashy as their raps, but their creativity of expression knows no limits. They might be the only rappers who can hook me bragging about wearing designer while actually dripping the Macklemore discount threads and self-made merch, because the image I get is my friends succeeding — SlumBums rocking stages is a vision so vivid it might be prophetic. Hanta Yo!baby. Clear the way. 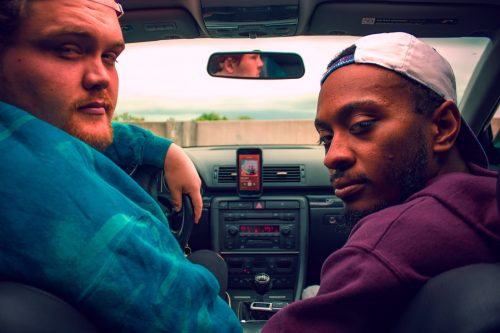 Kodiak: I think the nice part is, even when we put those pressures on ourselves about one way or another way, the other one is there to be like ‘why are you doing that?’ If there was one phrase I could say about SlumBums it would be ‘no pressure.’

$tew: It really is no pressure honestly.

Kodiak: Even when there’s pressure on us, the other one kind of steps in and is like..

$tew: Yeah cause we put so much pressure on ourselves. That’s our thing. We are both individually some anxiety-ridden self-hatin’ mother fuckers [laughs]. So we need the other person to be like ‘look mother fucker, you’re talented as shit and what you just made was cool as fuck! So calm the fuck down! Relax!

Check out an earlier Why We Like It on SlumBums that I wrote for the project’s single, “Possessed” and stream Life is Strange. Follow SlumBums on Twitter and Instagram to stay up to date on their latest work. You can also watch the SlumBums mini documentary produced by Kyle Davidson.