Odd Future’s legacy of self-expression changed hip hop forever. Whether Brockhampton will leave a similar imprint still remains to be seen – but one thing is for certain: Brockhampton’s music has reached a level that Odd Future’s never did.

No one was talking about Brockhampton last January. Even Brockhampton’s earliest adopters were a far cry from the frenzied ‘Stans’ and die hards that pack venues for their shows today.

This January, everything has changed. Brockhampton went on a tear for the second half of 2017. They put out three self-produced, feature length albums, dubbed the “SATURATION Trilogy”, all recorded in producer Romil Hemnani’s bedroom. Oh yeah, and they dropped a supporting 2+ hour long Saturation Documentary containing over a year’s worth of footage. The intent was to ‘saturate’ the market with Brockhampton’s sound, brand, and personality.

Brockhampton’s music is getting over two million plays a month on Spotify. Their music videos have tens of millions of views on YouTube. They’re currently in the midst of their second nationwide tour in less than five months. They’ve been announced in the lineup of major festivals across the country, including Coachella, Bonnaroo, Governor’s Ball, and Boston Calling. Shows are selling out left and right. Fans are getting tattooed. Crowds are moshing and crying.

Brockhampton’s ‘saturating’ sprint in 2017 is something we rarely see in music today. Their work ethic over the last year is reminiscent of Gucci Mane’s famous run of 27 mixtapes from 2013-2014. All Brockhampton’s hard work paid off on their most recent album, Saturation III. 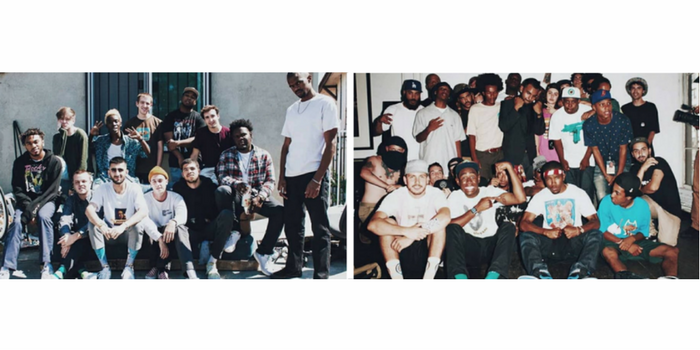 When something new and different spreads across our culture like wildfire, observers are quick to draw comparisons to help unfamiliar audiences understand the phenomenon. Unique is hard to define; analogies are simple. Brockhampton’s ascent has been no exception to this rule.

In fact,  Brockhampton has been far from shy about the influence Odd Future’s had on them and their aspirations.

“I definitely identified with Tyler, The Creator and Frank Ocean. That was a boyband to me, even though they were a rap collective to everyone else. That’s where the standard was for me. That was my perfect.” – Kevin Abstract

Odd Future was a group that housed incredibly talented individual artists, where the cream (Earl Sweatshirt, Tyler the Creator, Frank Ocean) stood out from the rest. In other words, they were top heavy.

On their December 2017 album, Brockhampton is anything but top heavy. Saturation III showcased creativity, collaborative energy, and music of a level that Odd Future was never able to fully achieve.

As one of Brockhampton’s biggest influences, Odd Future’s impression on the Internet’s First Boy Band can’t be overstated. Any Odd Future fan will find familiar sounds and themes throughout the first two installments of the Saturation trilogy, both in production and vocals.

There are very few songs where Odd Future successfully fit three or more artists onto a track. Overall, Odd Future was carried by the individual strength of Tyler, Earl, and Frank. Each of these artists have gone on to have solo careers that easily eclipse anything they achieved as part of the Odd Future collective. 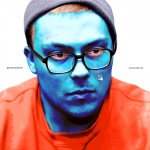 Brockhampton’s Saturation III, on the other hand, lives off whole group collaboration. Virtually every song on the album includes nearly all of their vocalists – an impressive feat considering there are seven of them. Hooks are creative, diverse, and insatiably catchy. Saturation III doesn’t just showcase their variety and individual talent, but integrates all of their unique sounds together into a sum that is truly greater than its parts. No single member’s individuality is sacrificed in this musical mosaic.

“We wake up in an enriching creative environment. We accept genius. We accept ideas. We shut down ideas that don’t represent our values. We critique each other. We never stop learning.” – Kevin Abstract

Look, there’s no way around it. Odd Future changed the world of hip hop forever. Their music was different and provocative, but their real lasting impact is due to their brand and persona. The jury is still out on whether Brockhampton will even come close to leaving a legacy like Odd Future’s. One thing is for certain, however – Brockhampton’s music, as heard on Saturation III, has already left Odd Future in the rearview.

On their most successful collaborative songs, Odd Future would use a sequential, “next one up” approach where each member took turns doing their thing on the beat, one after another. I call this the “Rappin Round Robin”. Check it out on the mini playlist below.

The straightforward “Rappin Round Robin” approach has been a mainstay in hip hop for decades. It’s a conventional approach that showcases the talents of each rapper while allowing the listener to easily differentiate between them. Until recently hip hop artists rarely used their voice to hold the song’s melody. The non-melodic vocal approach posed a problem for truly integrating voices together rather than placing them side-by-side. Other genres had an easy out: harmonies.

Brockhampton also leaned heavily on the “Rappin Round Robin” in their early work, where everyone would just take turns spitting their verse over the beat. You can hear it on tracks from Saturation I & Saturation II  like “STAR”, “JELLO”, and “JUNKY” from Saturations I & II. Check out a few examples on the mini playlist below.

Saturation III was a different story for Brockhampton’s vocalists. On tracks like “HOTTIE”, “BOOGIE”, and “TEAM”, we hear a far more complex and complementary approach from Brockhampton.

Vocalists slide in and out of tracks effortlessly, with no definite beginning or end to each member’s section of contribution. They finish each other’s sentences. They reference each other’s wordplay and carry themes forward from each other’s verses. The seamless transition between voices is reminiscent of masterfully woven, multi-vocalist work like that heard on Frank Ocean’s Blonde and Kanye West’s Life of Pablo.

Let’s look at a few examples from Saturation III.

“HOTTIE”
“Hottie” is the most pop-heavy track on Saturation III and puts Brockhampton’s chemistry under a spotlight. All the vocalists carry HOTTIE’s melody forward in different ways throughout song. JOBA comes in and out as the ultimate utility player: serving as a transitionary element between vocalists, as a supplement to other vocalists, and as a primary vehicle with supplemental vocalists behind him.

“BOOGIE”
Brockhampton bounces around between vocalists so quickly in this track it’s amazing that it sounds so cohesive. In just 20 seconds (0:51-1:11) we hear 3+ vocalists use different flows and melodies, with each sounding great enough to be a hook in and of themselves.

“TEAM”
Brockhampton’s vocalist integration shines the second half of “TEAM”. Vocalists pass an interesting flow around between each other that ends up seamlessly blending into a hook. By the end of the song you aren’t even sure which of them you’re hearing anymore.

The Art of the Hook

For whatever reason, Odd Future never found a style of hook that both stuck in listeners’ ears and fit their sound. It may have been distraction from the temptation of looming solo careers. More than likely, they just didn’t care.

After sharing that same struggle in their early work, Brockhampton found the right recipe on Saturation III. The album is filled to the brim with hooks that both fit their group sound like a glove while also carving a permanent spot in your head. Saturation III‘s hooks are diverse in style, sound, and placement, which is what makes their consistent quality so impressive.

Some hooks are raps. Some hooks are melodies. Others are somewhere in between. They come at different times in the tracks – sometimes at the beginning, sometimes sprinkled throughout, and occasionally don’t even hit until the very end of the song. But they have one major thing in common – whichever S3 hook you hear last will be stuck in your head until you either go to sleep or start the album all over again.

Check out some of Saturation III‘s best hooks on the mini playlist below: 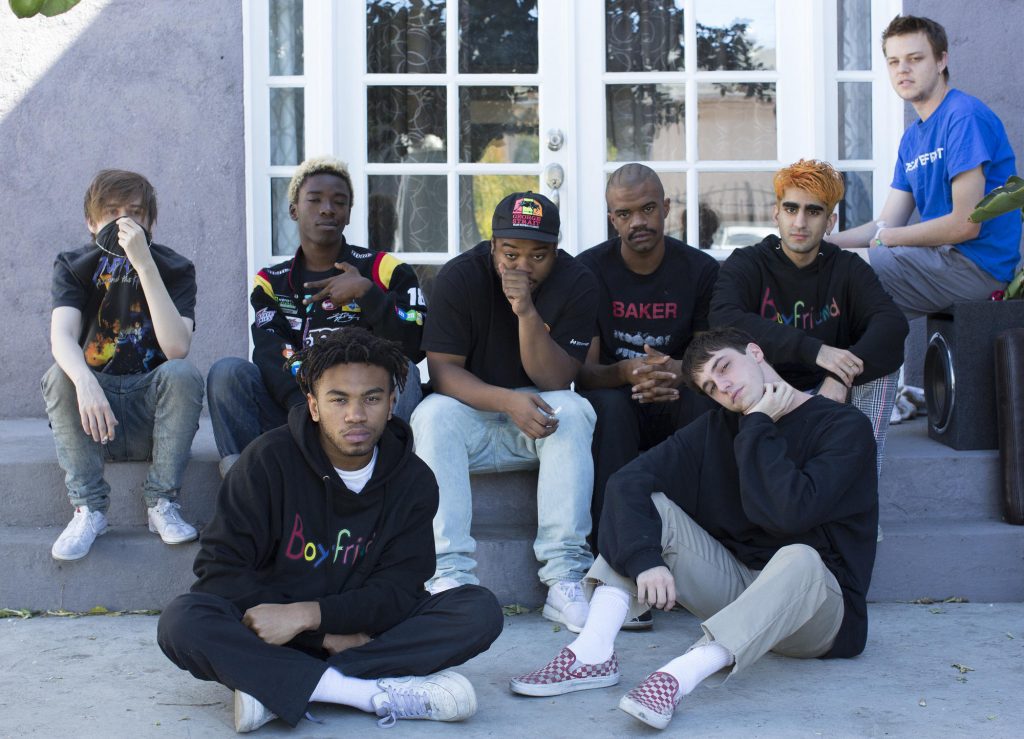 Odd Future rarely showcased their entire group on a song. Instead, they preferred to build albums featuring the entire group through smaller collabs and break offs.

In their early days, Brockhampton also struggled to incorporate so many different vocalists onto a single track. On Saturation I for example, vocalists like JOBA and Merlyn would occasionally go missing for several-song stretches at a time. This continued (albeit to a lesser degree) on Saturation II. But with each new album, Brockhampton has utilized the entire vocal cast on more and more songs.

Virtually every song on Saturation III features the vast majority of Brockhampton’s seven vocalists. Blending so many different styles, voices, and specialties into a cohesive sound is no small feat – particularly in their second year together as a group. A great example of this is their multitrack “SISTER/NATION” from the album. Hell, they even incorporate their webmaster, Roberto, into this track.

Legitimate group chemistry like that on Brockhampton’s Saturation III doesn’t come around often. In fact, only a few hip hop groups have ever managed it to this extent. Crews like Wu-Tang Clan, Geto Boys, TDE, and the duo Mobb Deep have long adorned this elite pantheon of rap collaboration – but Wu-Tang Clan was the only large group that was able to maintain their popularity and legacy for any significant stretch of time. 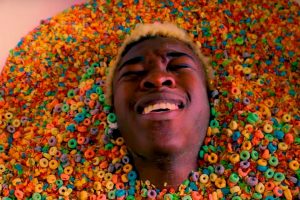 Although Brockhampton’s collective chemistry on Saturation III bypassed Odd Future’s music (even at their peak), they still have a long way to go before being considered an all time great hip hop collective. One of the greatest indicators of their potential will be their ability to stick together and avoid breakups or solo work. The title of their recently announced 2018 album Team Effort makes it very clear that they are putting Brockhampton first and themselves second.

It also remains to be seen whether making the list of “all time great hip hop collectives” is even Brockhampton’s goal. They take the take their label as a boy band seriously, and vocalists constantly reference their desire to be pop stars.

Such is the intrigue of Brockhampton: we aren’t sure what their end game is. Do they want to use their brand of inclusive hip hop to change pop forever? Do they actually want to go down as the best boy band of all time? Do they want to engineer a platform to launch their own successful solo careers? Do they even know yet?

After watching the Saturation Documentary, one thing is abundantly clear: these guys make it up as they go. There was no unified, master plan from the beginning. There was only a willingness to work together and to sacrifice.

They don’t have it all figured out – but they’ve shown that they don’t need to. As long as they stick together and keep expecting greatness from one another, their ascent will continue. It’s easy to forget that none of these boys are over the age of 24. Kevin Abstract, the closest thing the group has to a leader, is only 20. If they keep it up, we won’t be hearing journalists compare Brockhampton to  collectives like Odd Future and Wu-Tang very often anymore. Instead, we’ll be hearing them compared to a new generation of artists citing Brockhampton as their chief inspiration.