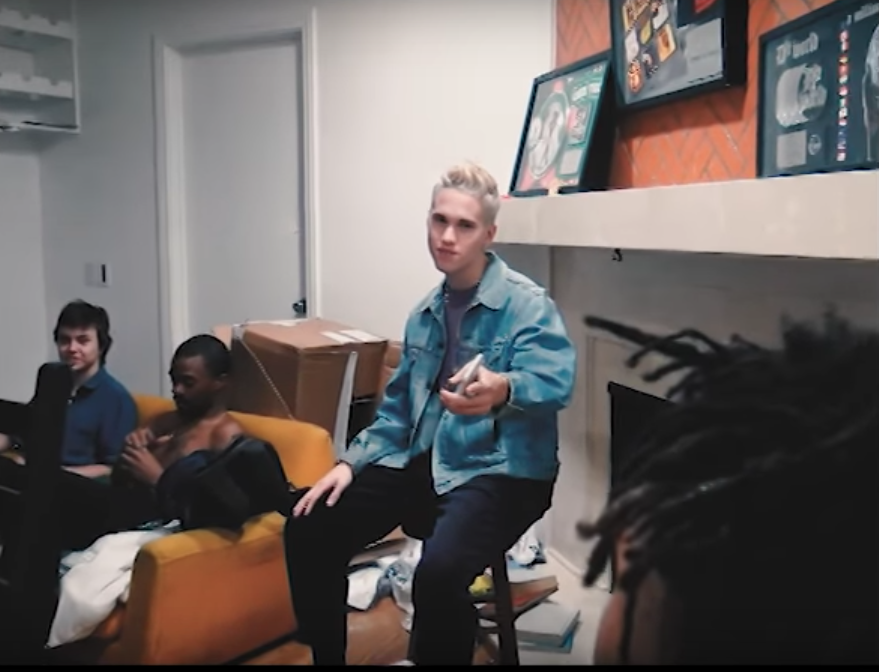 If you were one of the few who watched Brockhampton’s  SATURATION Documentary through its entire two and a half hour run time, you probably learned a lot about the creative process of the Internet’s First Boy Band. You probably also had to double-take around 1:50:10 mark, as an unfamiliar blonde guy began crooning into the mic and joking around with the rest of Brockhampton like he’d been there the entire time.

If you didn’t watch the documentary, we’ll fill you in. The SATURATION Documentary shares hours of intimate, behind the scenes videos of the one-of-a-kind group’s creative process for a host of songs, some of which didn’t even make it into any of the three SATURATION albums.

Just before the two hour mark, Brockhampton takes us behind-the-scenes of the making of BLEACH, a hauntingly beautiful song and a real standout track from the SATURATION III album. It’s powerful moment, but there’s one thing out of place:  we’ve never seen the guy recording BLEACH’s standout hook ever before.

He’s not anywhere in the documentary up until that point. He’s not in any of Brockhampton’s viral music videos. He’s nowhere to be found on album artwork. This shot is the first time where we see a non-member take part in the creative process in the entire movie. His mere presence is a shocking sight, especially considering the extent to which Brockhampton prides themselves on autonomy and self-reliance.

That boyish blonde is Ryan Beatty, and his ear-candy of a falsetto made BLEACH one of the catchiest songs of 2017. But who is Ryan Beatty? And how did he make his way into Brockhampton’s inner creative circle?

Ryan Beatty’s commercial for “It Can Wait”, a national anti texting and driving campaign in 2012

Who is Ryan Beatty? 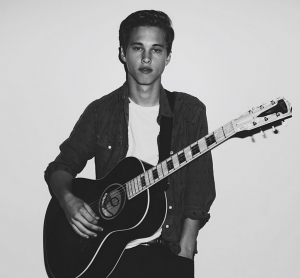 Ryan Beatty is a 20 year old singer from California with some killer vocal cords. His debut EP Because of You was released in 2012 and ascended to #1 on the US Pop Album Charts within 24 hours.

Although Ryan Beatty was once dubbed “Justin Bieber 2.0” by Billboard, it’s understandable why Brockhampton fans wouldn’t be familiar with his show stopping voice until now. Beatty’s EP premiered on Radio Disney, a platform with which Brockhampton has very little audience overlap. Beatty went on to spend the summer of 2013 as an opener on the only tour of his young career thus far, teen pop star Cody Simpson’s “Paradise Tour”.

Three weeks after the horrific  2016 shooting at the Pulse nightclub in Orlando, FL, Ryan Beatty took to instagram to share his truth and step out of the closet. Although Beatty never specifically tied his announcement to the shooting, his announcement joined a near-deafening cacophony of support for the gay community across the country.  In the post, Beatty said that he was “proud to be a raging homosexual” and that it had taken “20 years of suffocating in the closet” for him to be able to say it.

i’m so grateful to have friends and family that support me and just want me to be happy. that’s unconditional love.

Since those days, Ryan Beatty had seemingly dropped off the map. Following his tour with Cody Simpson, Beatty was supposed to have his first headlining tour in November of 2013 – but it was postponed until 2014. The tour never ended up happening in 2014. Despite rising to stardom through his viral covers and YouTube videos that amassed over 300,000 subscribers for his channel, Ryan Beatty also strangely deleted all his YouTube content in 2017. 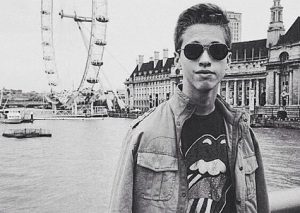 Ryan Beatty hasn’t completely disappeared since then, however. He did drop two singles in 2016 (“Passion” and “Stay Gold“), but his new music has failed to reach the levels of popularity of his earlier, mainstream sound. Once crowned as the heir apparent to American pop, Beatty has since become a rare sight on the charts that he once had a stranglehold on.

How does Ryan Beatty fit into Brockhampton?

How did the BEATTYHAMPTON collab materialize? It was clear that it’s no new thing, considering how familiar he seemed with the rest of Brockhampton, Kevin and Merlyn in particular.  Much of the story remains shrouded in the unknown – but we do know that the results of that collaboration were brilliant.

Ryan Beatty was an unmissable feature on Brockhampton’s Saturation III, but Brockhampton fans may also be surprised to learn that he made an appearance on the trilogy’s second installment.  Beatty provided the hook on QUEER, one of the most catchy and energetic tracks of Saturation II. But the Beatty + Brockhampton collaboration didn’t fully shine until Saturation III‘s track BLEACH, which made him the only outside artist that Brockhampton has featured on multiple albums so far.

Ryan Beatty brought a hauntingly psychedelic hook to BLEACH that sounds strikingly reminiscent to the earlier work of Kanye West, one of Brockhampton’s biggest influences. The powerful upper registry Ryan brings with his vocals is something that Brockhampton had been missing in previous projects, where they opted to used JOBA’s versatility to try to hold down those falsetto parts. In my opinion, it’s by far the most beautiful song Brockhampton has ever released, features some incredible production by beat-master Romil Hemnani, and it’s objectively impossible to get out of your head. Check it out:

Ryan Beatty was also featured on “PEACH” and “Call me after midnight”, two of Brockhampton’s unreleased demos which were included as part of a Saturation trilogy box set made available to fans  in conjunction with the release of Saturation III. Following in the footsteps of BLEACH and QUEER, these two tracks were standouts from the demo collection.

Will Ryan Beatty be on Team Effort?
Seeing as how Beatty had a rare feature on both Saturation II and Saturation III, it seems like there’s a strong chance we’ll see him again on their forthcoming 2018 album, Team Effort. Despite this, it is very possible that Brockhampton will focus on growing their own self-reliance to even greater levels in 2018, meaning album features might be hard to come by.

Will he be on the “Love Your Parents Tour”?
It’s definitely possible that Beatty could join for a portion of Brockhampton’s “Love Your Parents Tour”, considering he already has tour experience from his time on Cody Simpson’s “Paradise Tour”. He would be the most likely addition of any non-members, especially for shows in his home state of California.  Despite his experience and chemistry with the group, we think it’s pretty unlikely that anyone, Ryan Beatty or otherwise, joins the core group on this tour. Brockhampton’s primary objective for the next year seems to building on their teamwork and group chemistry, as implied in the name of their forthcoming 2018 album Team Effort. Besides, the stages is already crowded enough as it is! 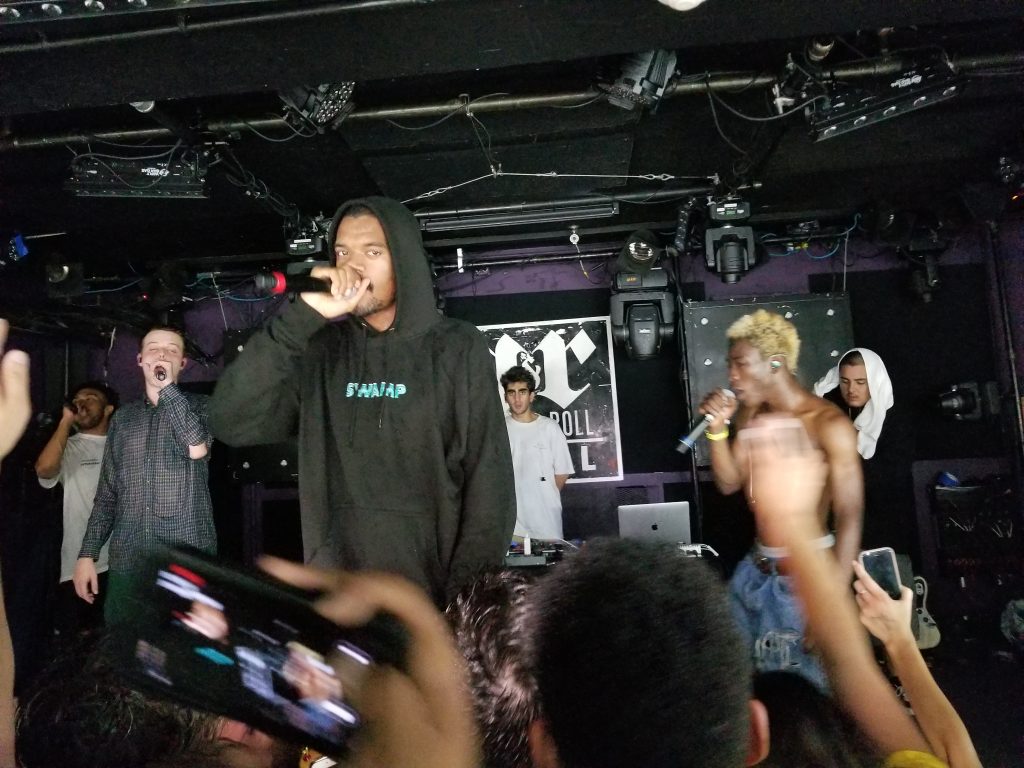