We dug through every interview Brian has ever given to discover his biggest inspirations and influences, then spent hours making the ultimate Rich Brian Playlist of Influences in celebration of his record-breaking album, “Amen”.

Who is Rich Brian?

Brian Imanuel, aka “Rich Brian”, is one of the most controversial artists in hip hop today.

When it comes to Rich Brian, people seem to fall into one of three categories:

Regardless of which category you call home, the rise of Rich Brian over the last year and a half has been one of the most curious in modern music. The meme-lord turned cultural icon got his start operating personal comedy/satire channels on Vine, Twitter, and YouTube. Known for his dry humor, penchant for the controversial, and his awkward personality, Brian gathered a sizeable online audience while being home-schooled by his parents in Jakarta, Indonesia.

Over time Brian’s humor drew a sizable audience, giving  him a platform from which to launch into the hip hop industry. Then Brian dropped the video for “Dat $tick” seemingly out of nowhere in late 2016. The song blew up overnight – and although it definitely had a tongue-in-cheek approach with the video, the music was legitimately good.

From there, Brian embarked upon a meandering path of singles before making two big announcements around the turn of the year. First, he was changing his name from his original alias, Rich Chigga. Secondly, his debut album was on the horizon:

Yes I now go by “Brian”. I have been planning to do this forever and I’m so happy to finally do it. I was naive & I made a mistake. new year, new beginning, happy new years™️

With such a limited discography, no one knew quite what to expect from Brian’s first real opportunity to fully flex his creative muscles in the studio. But within 24 hours, our questions were answered as Amen became the first ever album by an Asian artist to reach #1 on the iTunes Hip Hop Charts.

How did this teenager from Jakarta who, just a few years ago was teaching himself English by watching Youtube videos, top out the charts so quickly? The answer: with a lot of work and a little help from the hip hop icons that he calls his biggest influences.

As a rapper, Rich Brian showcases a smooth flow with a melodic deep voice that belies his youth. His lyricism isn’t lighting the world on fire, but it does do a good job communicating ideas and he has a knack for creating catchy hooks and pre-hooks.

As a producer, Rich Brian uses beautiful chords, well-mixed percussion, satisfyingly heavy bass lines, and quick tempos to provide a harmonic backdrop for his voice. His wandering melodies and laidback style give each song enough substance to enjoy even without the lyrics, while also being smooth enough to avoid distracting from the bars he puts on there.

Rich Brian has listed a narrow list of artists as influences for his music, which focuses especially on the late 2000’s and early 2010’s. From Brian’s mouth himself, his influences include:

“I’ve been really influenced by Tyler, the Creator. I really like what he’s doing, when he mixes his music and his musical career with comedy. I really would like to do that in the future.” – Brian Imanuel with Vocativ

The “Influences of: Rich Brian” has 16 songs in total, all of which are from one of Rich Brian’s five major musical influences. The first 14 songs of the playlist are ordered specifically to provide a song-by-song comparison to Amen, with each influencer song in the order of its counterpart from the album. The final 2 songs are “bonus” songs, intended to pair with two of Rich Brian’s biggest non-album hits, “Gospel” and “Dat $tick”.

Influencer songs are chosen for a variety of reasons including production, melody, and flow. For more information about why each influencer song was chosen or its Rich Brian counterpart, see the official Playlist Guide below the playlist!

Influences of: Rich Brian – the Playlist

Findings
While creating this playlist, something became apparent. Although Brian cites many influences, his sound is definitely influenced the most by the music of Childish Gambino and Yung Lean. It’s true that he does borrow some inspiration from 2 Chainz and Young Thug for his flows, and from Tyler for his production. But overall, his voice, vocal style, and production has all the makings of a strangely catchy hybrid of Gambino and Lean, two flag bearers of alternative/indie hip hop. 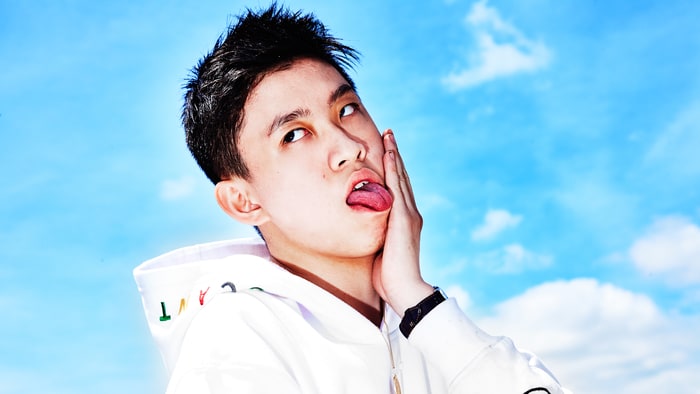