CentralSauce » Why We Like It: Noha Saré’s “Head Held High”

We at CentralSauce are no strangers to Noha Saré, a Dutch R&B artist coming out of Amsterdam. I’ve had the good fortune to cover two — well, now three — of her singles, including her debut “Talk To Me” and her follow-up “LOST.” Her singular atmosphere and headstrong mission is striking, as are her lyrics, which reach inward and find strength in the struggle. Her new track, “Head Held High,” takes those convictions to new ends.

Noha Saré walks a delicate line, and she walks it well.

Her tracks are brooding, but never malevolent; cavernous, but never empty; sharp-edged, but never serrated. There’s poise to the way she pairs unease with pop sheen, her R&B vocals are as inviting as her melodies are intriguing. Her signature tension holds the audience, her well-earned releases slicing like the finest blade, cutting to the core of the issues with a few deft lines.

“Head Held High” is yet another demonstration, both of Noha’s distinctive sound and the ways in which it’s deepening. Hers is a fiercely feminist pen, the songs often concerned with the perseverance, strength and celebration of women. “Talk To Me,” the first of her songs covered in the Why We Like It series, sharply flips from pleading to power plays: “take a pass at the king, and be his beautiful queen / I will put you in prison, you will never be seen / now bow to me boy, bow to the queen,” she sings, lyrics a wry threat. On “LOST,” her second and most recent WWLI feature, she grapples with an estrangement, bruised and disoriented — but still getting up again, even when there’s no clear path forward.

In a sense, “Head Held High” picks up where that last installment left off, with Noha dusting herself off and getting on with the show. The repeating refrains throughout are catchy, but they feel as though they’re aimed within, each phrase working to convince Noha of her own resilience. “When I lean to the left side, I lay my eyes on the right,” she repeats, vigilance at play. “Keep our head held high, get ready for the show now / ‘cause it’s time to move on now,” she reminds herself, defiance rising into the audacious bridge: “I rise when you tell me to bend (over), I’ll rise then I do it again / Come alive when you’re holding me back, then I do it again…”

The lyrical slow burn is matched in Noha’s compelling performance. Never does her presence outstrip the music itself, her voice ever in service of the song. No misplaced flexes, no searing asides — Noha’s voice builds to a single crescendo, mighty and earned, and then she pulls back, her restraint making that peak all the more powerful. The production provides an invaluable assist, the spaciousness an asset that doesn’t draw attention to itself. The synth is as simple as it is effective, sounding not unlike something that Thom Yorke might slip onto a record, albeit far less paranoid.

Confident in its restraint and sure in its aim, “Head Held High” moves with the strength of that titular lyric. It’s the second single from her upcoming EP, alongside the previously covered “LOST.” That debut effort is due in February 2022, and as Noha moves into that important project, it’s easy to see her mission in the music itself: “she carries the sun and her hands are made of gold, she’s about to take it all.” 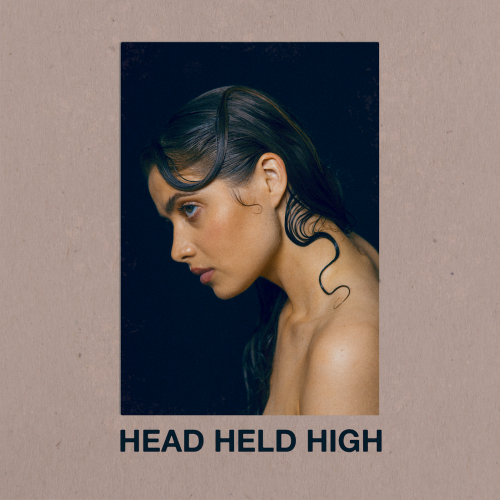 The core of “Head Held High” actually took shape when my brother Marius sent me a rough demo version of something he created; a beat based on a catchy bell motif — which the song starts with. This bell motif, in combination with the vocal melody of the chorus, gave me an ominous feeling and we wanted to expand that feeling to the rest of the song. We all liked the idea of using this dominant/dark synth. We wanted the song to radiate strength.

We are working towards our EP release and we actually wrote ‘Head Held High’ as a follow-up to another song which will also be on the EP. The first song is about escaping reality by creating your own fantasy world. ‘Head Held High,’ on the other hand, is about revolt. It’s about standing up to those who try to keep you down and try to make you feel small. I, as a young woman, wrote this song to those who cannot and will not allow women to live up to their dreams. But the song can be about anything or anyone actually; also about this inner critical voice in our own heads that tries to tell us we aren’t good enough.” — Noha Saré for CentralSauce

“Head Held High” is Noha’s third single, chasing “Talk To Me” and “LOST.” We’ve covered both of those tracks on CentralSauce — here’s “Talk To Me,” and here’s “LOST.”

We’re busy anticipating Noha’s debut EP, which will include “LOST” and “Head Held High,” as well as three totally new tracks. In the meantime, you can (and should) keep up with Noha on Instagram.