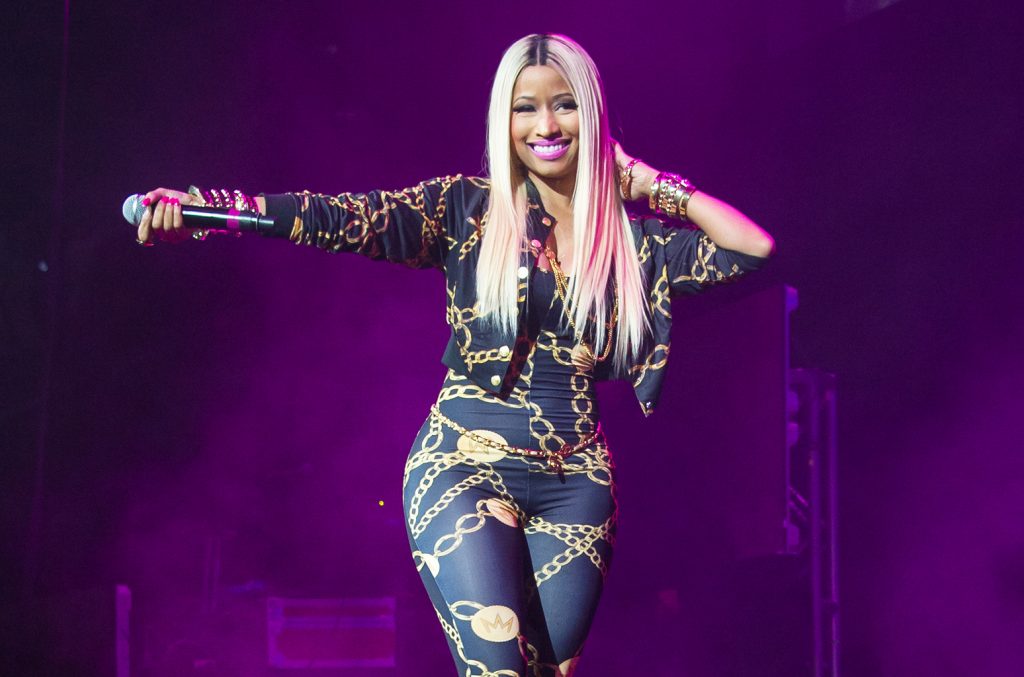 In the eleven years following her debut mixtape, Nicki Minaj has released 164 songs, 4 albums, and 2 additional mixtapes as a lead artist. Strangely enough, it wasn’t until QUEEN, Nicki’s fourth studio album, that the platinum-selling recording artist chose to feature another female rapper on one of her tracks. But why has Nicki Minaj avoided collaborating with other women for over a decade? We look to the data for answers.

When Foxy Brown popped up in the tracklist for QUEEN on the album’s penultimate track “Coco Chanel”, it felt like a hollow submission to the climate of acceptance Cardi B has been fostering since mid-2017. Cardi’s path to success as a female rapper didn’t come paved with the careers of vanquished enemies, and in the 12 months since “Bodak Yellow” she has managed to dodge almost all attempts by the media to drag her into a bitter feud with Nicki Minaj.

Nicki Minaj’s path to commercial ubiquity has seemingly been defined by the perception that only one female rapper may reign at a time. The very first track on her debut album features the chorus “I’m the best bitch doing it”, and track two is “Roman’s Revenge”, a scathing, aggressive diss track aimed squarely at one of female rap’s most decorated alumni, Lil’ Kim.

Despite her track record, Nicki seems to understand the importance of sponsoring rising talent when you’re on top of the game. In early 2018, Nicki said the following after the Cardi B / “Motorsport” disagreement:

I remember when I first came in the game, if a female of that stature had done a feature with me on it, I would only be singing their praises and saying thank you… I could just imagine how many girls wish they could have been on a song with Nicki Minaj, and I’m not saying it in a cocky way, but yikes.”

Of the 148 tracks Nicki dropped before QUEEN as a lead artist, there isn’t a single female rap feature among them. The closest she came was remixing “Boss Ass Bitch” by underground female rap group PTAF and leaving their vocals on the remix.

74% of the guests Nicki Minaj enlisted before QUEEN were male rappers. That list includes Eminem, Kanye West, Drake, Lil Wayne, Cam’Ron, Jeezy, 2 Chainz, and even Nas, so clearly Nicki does not fear being judged against the great lyrical talent.

Whilst male rap is very competitive, there is still plenty of room at the top for multiple male rap titans. In 2001, Eminem bested Jay-Z on “Renegade” – so much so that ‘renegade’ quickly became a verb used to describe any time a guest washes the lead artist (see: Nicki Minaj’s verse on Kanye track “Monster” from MBDTF). Despite Eminem’s verse, The Blueprint is still considered a classic record and Jay-Z is still considered a top 5 emcee.

But is this trend a result of the stereotype that there can only be one “queen” in female rap, or is there some deeper explanation?

Did Female Rappers Collaborate More In the 90s and 2000s?

The short and long answer is yes, significantly. Taking into account album tracks and singles, here is how often 4 of the top female rappers from this era featured other female rappers:

Female rap legends of the past collaborated significantly more with other female rappers than the current generation. Missy was especially gracious with her star power; 21.8% of all her guests were female rappers. Compare this to Nicki Minaj’s ratio, which was just 16.4% prior to QUEEN, an album that actually lowered her ratio even further with just two female artists featured versus six male artists.

For an example of how inclusive female artists once were to their counterparts, fans only need look as far back as Lil’ Kim’s “Not Tonight (Ladies Night Remix)”, which featured fellow female rappers Lisa Lopes, Da Brat, Angie Martinez and Missy Elliott. The track is a celebration of the strength and success of female rap in the 90s, with love and loyalty littered throughout the 5 heavy verses.

When Cardi B went Gold in a day in 2018 with her debut album Invasion of Privacy, hip-hop was quick to speculate on Nicki Minaj’s response. Was her reign over? Was Cardi the new QUEEN?

Part of this narrrative rests upon the fact that only 3 female rappers have gone platinum this decade: Nicki Minaj, Cardi B, and Iggy Azalea. There have only been 6 platinum albums among them. 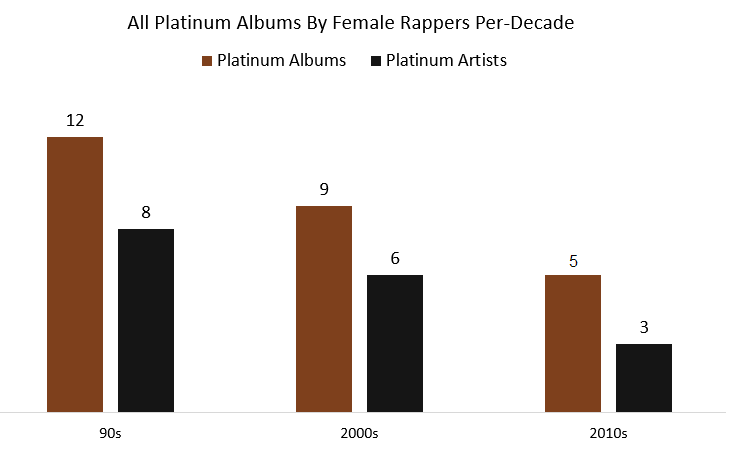 Post-2010, the idea of only one female rap queen truly takes hold. Whilst Iggy Azalea did release a platinum album in 2014 (and managed to out-chart the entire genre of hip-hop for the year), it has been Nicki dominating, releasing 3 multi-platinum projects and a slew of hit singles.

There could be trickle-down effects from Nicki’s hesitance to feature other female rappers. Mentors play a huge role in hip-hop, with numerous high-profile rappers coming up under the tutelage of a larger, more established name. Dr. Dre is especially adept at this, fostering the careers of Snoop Dogg, Eminem, and contributing to that of Kendrick Lamar. Eminem then went on to give 50 Cent an opportunity. Jay-Z and Dame Dash brought through Kanye West, and Lil Wayne has been pivotal in the careers of both Drake and Nicki Minaj.

It’s rare to see a top-tier rapper in the past 20 years without rappers underneath them, artists they are trying to help with cosigns and label deals. Kanye West has GOOD Music, Jay-Z had Roc-A-Fella and then Roc Nation. Drake has OVO Sound. J. Cole has Dreamville. Yet Nicki Minaj has none of these, she hasn’t created a record label, no artists underneath her, no promising female rappers on the come up. The closest she comes is shouting out female rappers who show her “genuine love”.

Cardi B is in a similar situation, although it’s unfair to expect her to begin building a dynasty a few months after her debut record.

It’s possible that this culture of “one female rapper to rule them all” may have created a vacuum of relevant female rappers. It’s also possible Nicki feels no need for a lot of female features, since she can sing a hook just as well as her pop contemporaries. Regardless, as the graphic below shows, Nicki collaborates relatively little with females at all, regardless of genre: 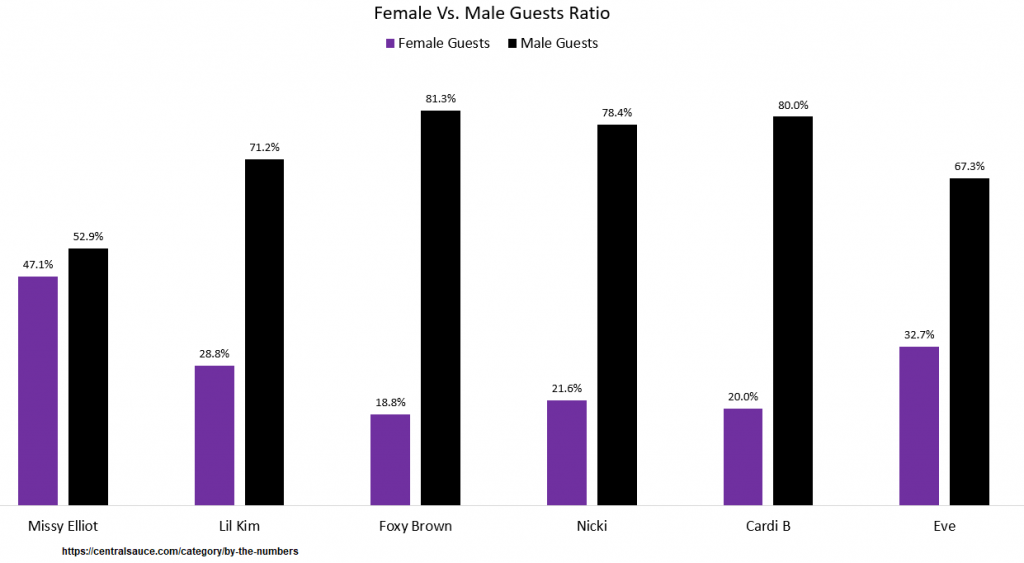 In trying to be the only female rapper who is commercially successful, Nicki has merely reinforced and perpetuated the stereotype, and created an unnecessary showdown with Cardi B. Cardi’s debut album Invasion of Privacy sold 255,000 copies and debuted at number 1 in its first week. In contrast, Nicki’s QUEEN sold 185,000 copies first week: a substantial number when not viewed through a competitive lens with her female colleagues.

The numbers make these specific comments by Nicki Minaj even harder to understand:

I could just imagine how many girls wish they could have been on a song with Nicki Minaj, and I’m not saying it in a cocky way, but yikes.”

With this in mind, why is Nicki hesitant to collaborate with other women? Nicki collaborates with plenty of male rappers, but if she is out-rapped by a male artist, “best female rapper” label isn’t impacted at all. Perhaps the perception is that if a young, up and coming artist out-raps the Queen of Rap, Nicki’s career may experience a cooling off period.

Foxy Brown is an established rapper and a known entity. If she were to best Nicki on a track, the world would likely celebrate Foxy rather than degrade Nicki.

Anything further is mere speculation, but with the numbers above laid out, plain and simple, what are your thoughts on why Nicki has only once collaborated with a female rapper? 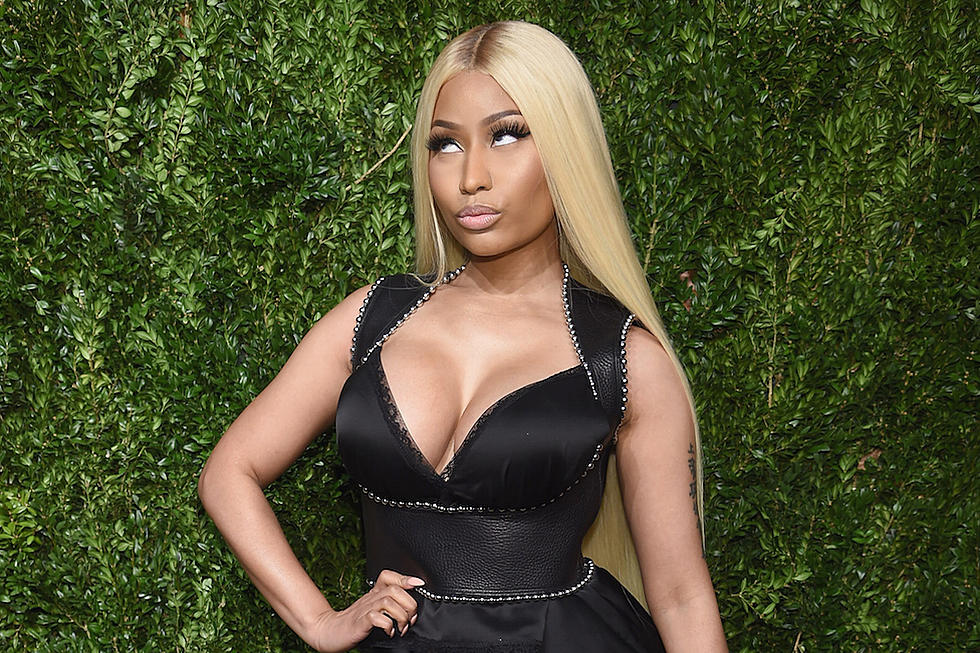