Fans and critics alike have been divided on Nicki Minaj’s musical duality since her debut album was released back in 2010. With the early numbers from her latest album QUEEN now coming in, a distinct statistical trend has emerged. As far as the numbers are concerned, the question of “Pop Nicki” vs “Rap Nicki” has finally been answered.

Nicki Minaj’s focus on commercial success begs the question: is her ‘pop side’ just an orchestrated method to create chart and sales success? Nicki maintains that singing is a passion of hers, and backing this is the clear distinction between “Mixtape Nicki” and “Pop Nicki” — the former referring to Nicki’s prodigious skill as an emcee, the latter, tracks like “Your Love” and “Starships”, and her ability to sing hooks.

QUEEN is not the commercial watermark Nicki Minaj was likely hoping to set. Selling just 185,000 copies first week, it couldn’t earn Nicki a number 1 album (that goes to Travis Scott’s ASTROWORLD in its second week at 205,000), and it couldn’t come close to Cardi B’s first week total of 255,000 for Invasion of Privacy (an album that features 94% rapping and just 6% singing). It also continues the downward trend of her first-week sales, falling 59,000 copies short of 2014’s The Pinkprint and a huge 190,000 copies short of debut Pink Friday.

These numbers have seemingly stung Nicki, and it’s these bars on 2017 Gucci Mane song “Make Love” that point to why she is so put-out by her first week sales:

You see, silly rabbit, to be the Queen of rap / You gotta sell records, you gotta get plaques

With this trend in mind, it’s clear why Nicki has been pushing QUEEN so hard. She re-ignited her feud with Cardi B, made up with Funkmaster Flex in an 80 minute interview, stirred controversy with track “Barbie Dreams”, created a huge argument with ex-boyfriend Safaree on twitter, and snuck her collaboration with Tekashi 6ix9ine, “FEFE”, onto the album after the release date with no announcement.

When the first week numbers were announced, she hopped on twitter to vent about why she believes she had the number 1 album this week, and not Travis, bringing Travis’ daughter Stormi and partner Kylie Jenner into the debate, and criticising Spotify for behind-the-scenes manipulation.

Travis sold over 50K of these. With no requirement of redeeming the album! With no dates for a tour, etc. I spoke to him. He knows he doesn’t have the #1 album this week. I love my fans for the #1 album in AMERICA! I’ll explain on #QueenRadio 4 albums in, #1 in 86 countries ♥️ pic.twitter.com/CiYEuczgm3

Why, then, are these first-week numbers for QUEEN so low? If Nicki is still a marketable force in hip-hop, if she promoted the record so hard and utilised her vast fan-base, why did her sales falter?

The answer lies in the numbers, particularly the distinction between “Rap Nicki” and “Pop Nicki”, and the positive impact her pop side has had on sales throughout her career.

These numbers source from the research and data in this article, published on CentralSauce. 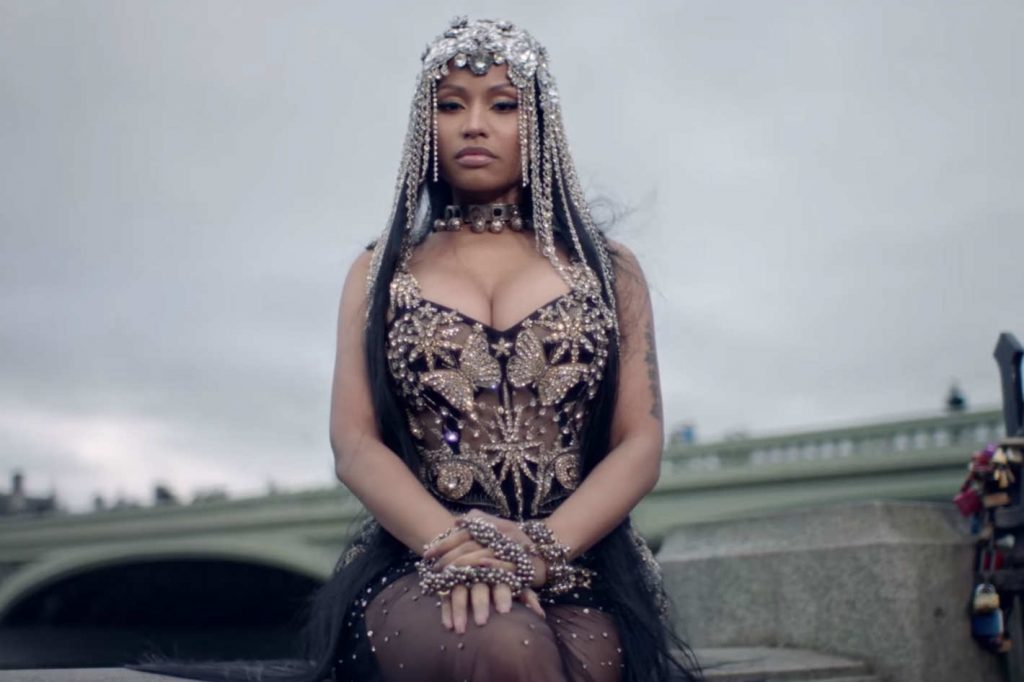 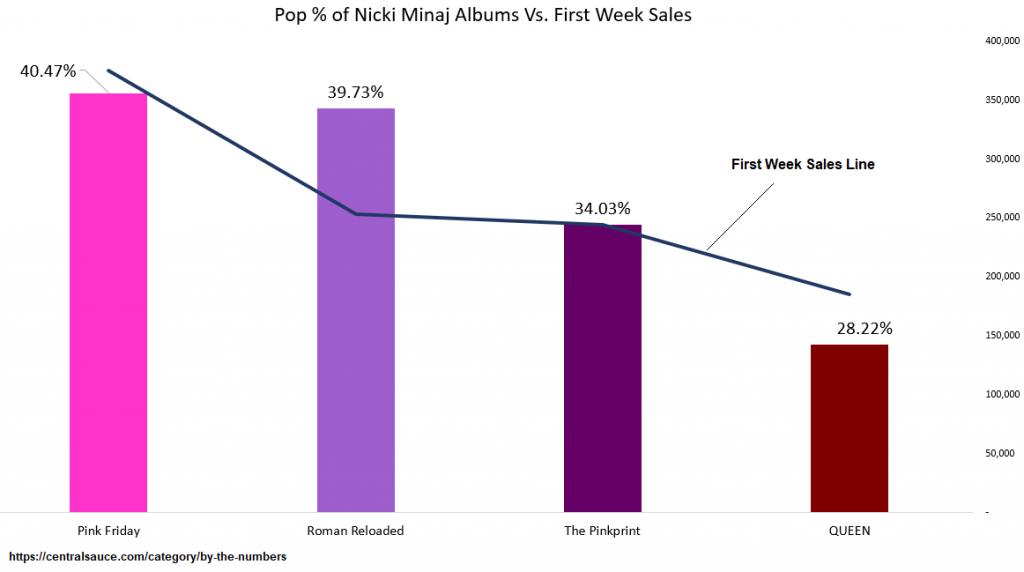 As Nicki’s career has progressed, the pop percentage of her albums has decreased; QUEEN features the least singing and the most rapping of her entire career (a full analysis of the pop % of Nicki’s entire discography can be found here). As the amount of pop on her albums decreases, Nicki’s first week sales have fallen too.

Analysing first week sales is the most durable way of comparing the commercial success of a new album with previous records. Total sales get lost among certifications (a platinum certification could be 1.01 million sales, or 1.95 million), and album chart positions are greatly affected by whatever else was released in the same week. First week sales are also affected by lead singles, so it’s necessary to look at the pop percentage of the songs Nicki released to promote each record, as well as the album as a whole.

Pink Friday represents Nicki’s peak in terms of first-week sales and the record is also the most pop-laden (singing-heavy) of her career. She released 3 singles prior to the album:

Pop is the pertinent connection between these three singles. All feature Nicki singing hooks and delivering rap verses, and all could be considered pop tracks with rap verses inserted, rather than the inverse.

The rest of the album uses Nicki’s pop and rap persona’s to create a fully-realised project, one in which the label need not search for pop stars to croon hooks. The numbers are an oscillating mix, from 100% rap on “Roman’s Revenge” and “Did It On Em”, to 5 tracks that include rap and pop almost equally.

Nicki Minaj’s singles prior to Roman Reloaded include:

Roman Reloaded is a bold embrace of Rap and Pop Nicki. The first seven songs are almost 100% rap, the next five are a blend of the two disciplines, and the six after are fully-fledged pop songs. Nicki placed a foot in both genres on this record; the pop tracks are unashamedly so, scraping the stratosphere with maximal EDM production and belted vocals. Regardless, it still features less pop than its predecessor. Roman Reloaded is Nicki’s second highest peak in terms of first-week sales, as well as her second highest album in terms of singing/pop content.

Related Sauce:   How an Australian Rapper Out-Sold and Out-Charted Every Other Rapper in 2014

Nicki’s singles prior to The PinkPrint:

Nicki utilises her singing in a different way on The PinkPrint than previously throughout her career. Rather than the huge pop hooks of Pink Friday and the pure pop section of Roman Reloaded, singing compliments the rap elements to add texture rather than dissonance on The PinkPrint.

The lead singles for The PinkPrint were nearly 100% rap, and it became Nicki’s lowest first-week figure at the time.

Nicki’s singles prior to QUEEN:

Nicki’s album with the lowest first-week sales once again coincides with rap-heavy album roll-out. “Barbie Tingz” didn’t end up being included on the record, but it did dominate the promotion cycle. Her collaboration with Tekashi 6ix9ine, “FEFE”, isn’t included, as it was originally a Tekashi track with a Nicki feature, that she eventually shoe-horned onto the album a few days after release when projections looked grim. 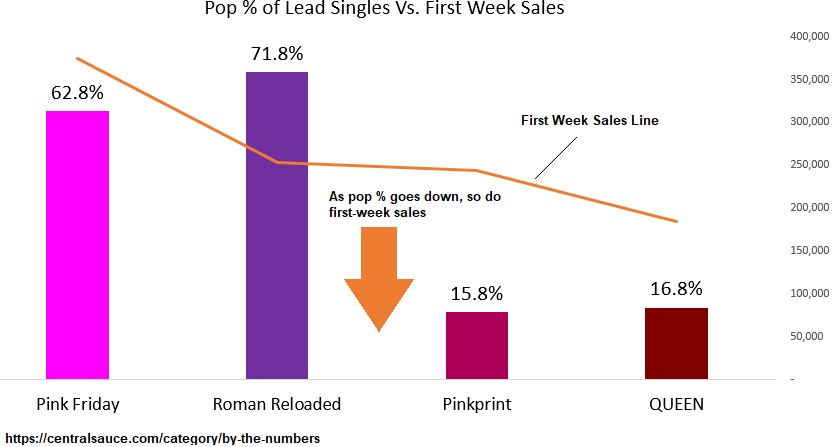 A lead single is the precursor to the album, the sneak peak, the songs to swell support and excitement. It gives fans an idea of the sound a record will bring, and in the case of QUEEN, it was track “Chun-Li” that most excited hip-hop heads. Funkmaster Flex, Peter Rosenberg and Joe Budden (noted Nicki Minaj critics) all praised the track, with focus on how heavy Nicki was spitting.

Yet the fans and consumers either don’t agree, or it didn’t prompt them to actually buy or stream the album more than usual. As the average pop % of Nicki’s albums has gone down, her first-week sales have too, indicating a clear correlation between how much Nicki sings, and how much she sells.

“Pop Nicki” vs. “Rap Nicki”: Where Does Nicki Minaj Go From Here?

It appears Nicki is at a crossroads in her artistic development. Her rap-focused albums sell significantly less than those with more pop and singing, yet Cardi B set records in 2017 and 2018 by rapping, truly rapping. Nicki’s bars on the Gucci Mane song, equating “Queen” status to platinum plaques, coupled with these statistics, suggest she must go back to singing more if she wishes to live up to the title of her fourth album. 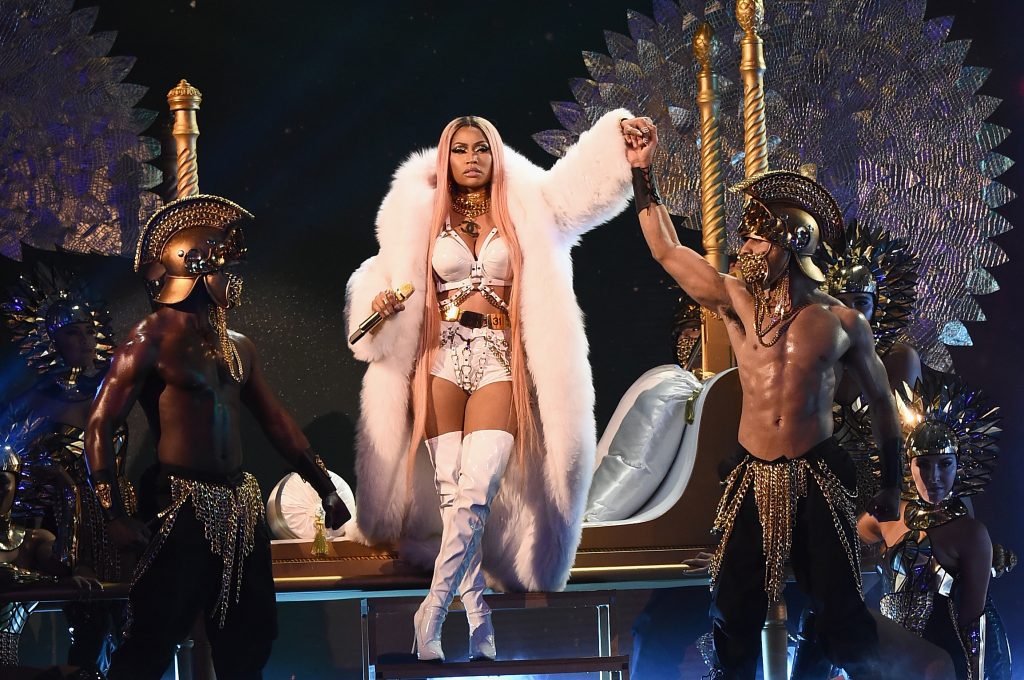