It’s not everyday that a track so earnestly old school slides into our inbox at SubmitHub, so the arrival of Altadena emcee Nate Shines came as a surprise. It’s the second time we’ve heard something from Shines, with his undeniable ear for a hook and accomplished pen game fusing with his renaissance revival that channels acts such as Q-Tip, DJ Premier and EPMD! That’s good company, alright.

It’s 2019, and nostalgia is a market in and of itself. That’s not to say that each and every throwback is a cynical cash grab, but there’s certainly a big difference between the good and the bad. “Rock On” falls firmly in the former category, substantiating the aesthetic within with no small amount of technical talent, gracing the beat with turntable scratches and Nas samples reminiscent of DJ Premier’s famed ‘sample collage’ hooks.

The instrumental is earnestly antiquated, and the hook an upbeat refrain that calls to mind the lighthearted boom-bap of decades past. Ultimately, however, it’s excellence in the execution that sells that track. Three well-paired emcees – that’s Shine, Medusa and Raashan Ahmad, all California-based – flex their considerable pen games atop a mean beat, and it’s these considerable talents that make it so easy to “Rock On.”

Right now I am in a very creative zone. I am making things and putting them into the world. Not only am I recording a full catalogue of songs to release, but I just launched an app called RYSE UP (that was just featured by Apple in the App Store), and I am helping other artists with their releases. I thrive when I am being productive so I am out here making it happen… I grew up loving the golden era of hip hop. Q-Tip and Guru were some of my biggest influencers so I decided to get back in the studio and jump into that vibe. We are bringing in older machines like the MPC 60 II and the ASR 10 as to capture the golden feel. I am creating what feels good to my soul and just doing my own thing.” – Nate Shines for CentralSauce 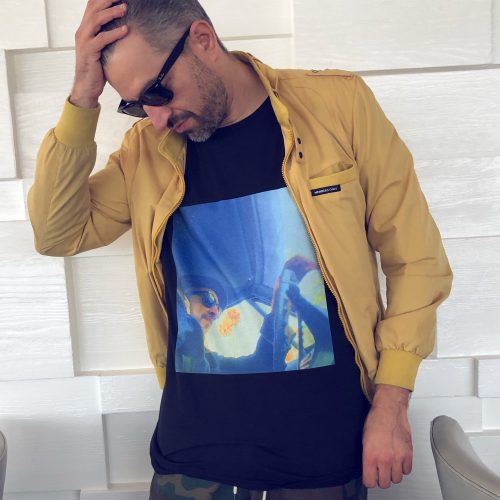