CentralSauce » Nicki Minaj, Cardi B, Drake or Kanye West: Who Was the Most Self-Obsessed Lyricist in 2018? 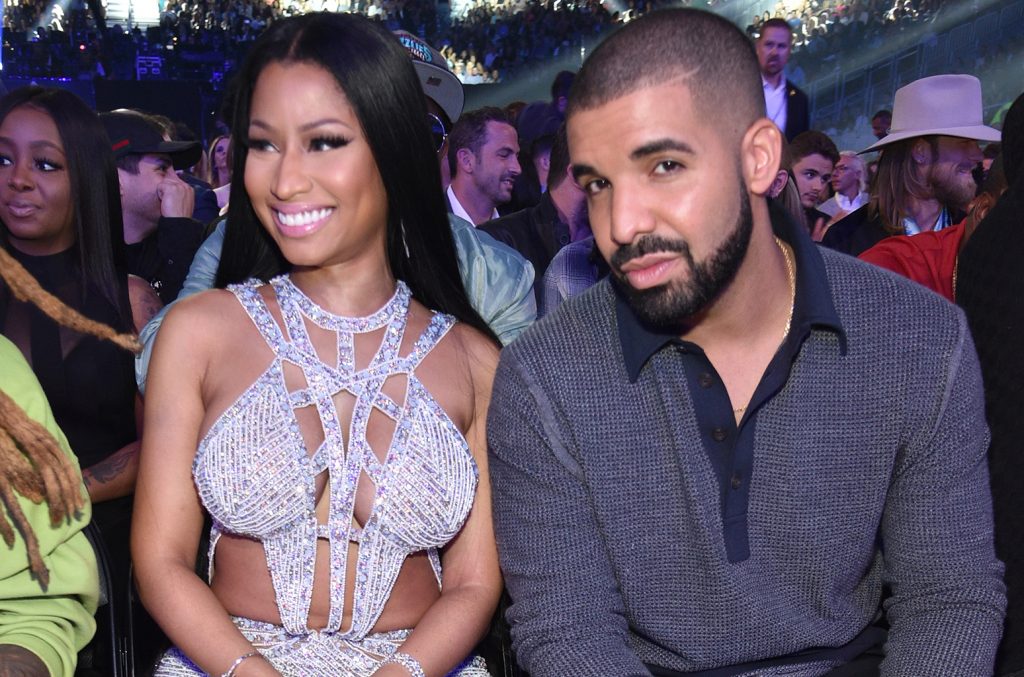 Back in 2017 it was discovered that Nicki Minaj mentioned herself on wax significantly more than her contemporaries. To recap, 11.5% of Nicki Minaj’s  discography prior to QUEEN contains self-references by Nicki..

In this analysis, Nicki was far ahead of the competition, even handily beating out noted egos like Kanye West and Jay-Z, who came in 7th and 9th respectively.

QUEEN is Nicki’s statement of intent, an album coming from a place of competition, of threat to her throne. Never before has Nicki faced the prospect of a true female rap contemporary. Cardi B provides this competition, and she has already had two singles top the Hot 100 charts, a feat Nicki hasn’t even achieved once (her highest charting single remains “Anaconda” at 2).

Where does Nicki go, content-wise, when under threat? It’s useful to revisit that original piece that dissected how often Nicki Minaj references herself, and compare her to Cardi B. Theoretically, Cardi has a lot more to prove, considering that she is a new artist with a chart-shattering single (“Bodak Yellow”), operating in a niche (female rap) where Nicki has enjoyed a largely uncontested reign (Iggy Azalea did own 2014) since 2010.

Nicki Minaj is on her 4th album, and has already become the most successful female rapper of all time. She shouldn’t have much left to prove, yet her album is titled QUEEN, and she is a prolific self-referencer. Is this merely an introspective, personal record, or does Nicki spend the album trying to defend her throne and ego?

Who references themselves more: Cardi B or Nicki Minaj? To provide some context on the comparison, I also threw Drake and Kanye West’s 2018 projects into the analysis.

Nicki Minaj is the “Queen” of Self-References in 2018 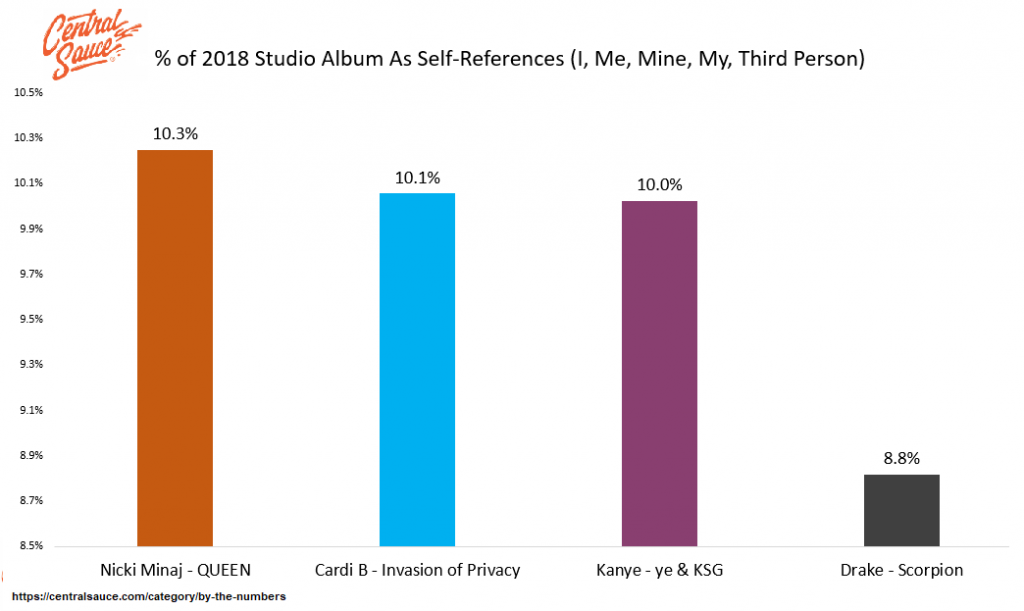 The analysis counts the numbers of words each artist delivers on their studio albums, and then counts how often those words contain self-references (using I, Me, My, Mine, and third person references), to come up with a percentage. So, 10.3% of Nicki Minaj’s words on QUEEN are self-references.

In the original analysis, Nicki was easily the most prolific self-referencer and, although the 10.3% on QUEEN falls short of the 11.5% of words she devotes to herself on previous records, it’s still a much higher figure than we see from Kanye, Drake, or Cardi B.

With little to prove, Cardi dropped Invasion of Privacy to stellar sales and an enthusiastic critical response. Here is how her numbers compare to other debut records from major artists. 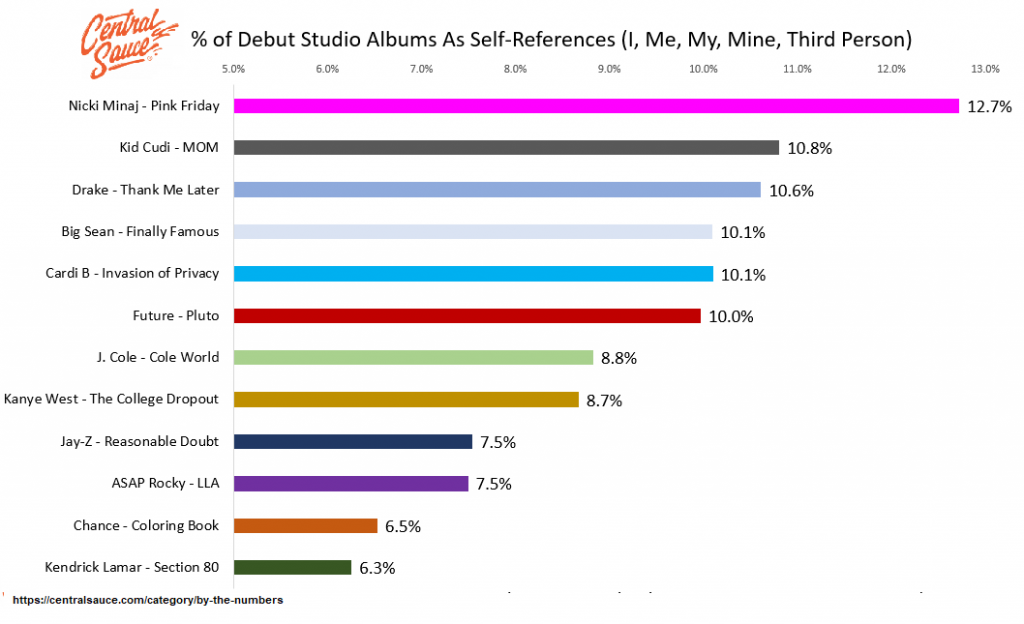 Nicki’s Pink Friday was evidently not a musical or lyrical blueprint for Cardi’s debut record. Cardi’s Invasion of Privacy features just 6% singing, compared to 40.47% on Nicki Minaj’s debut album, and Cardi doesn’t feel the need to reference herself anywhere near as often as Nicki.

Consider that Cardi B released this record in a climate where female rappers have been relatively ostracised from the mainstream for the last decade, outside of Nicki Minaj and Iggy Azalea’s glorious 2014. The very first lyrics on the record are “Look, they gave a bitch two options: strippin’ or lose”; a combative and aggressive start, understandable for an artist attempting to flourish in a limited market.

Yet Cardi B doesn’t attempt to ‘slay all-comers’ or place herself as the pinnacle of the genre on the record. “Best Life” is the track with the most self-references, and it’s merely a statement of power aimed at anyone foolish enough to cross her in a relationship. “Bodak Yellow” collects the second most self-references and, rather than being eager to prove on it, Cardi spits venom from a place of validity, building the kind of song a veteran would release to cement a legacy. The record is filled with this internal confidence that precludes any interpretations of self-aggrandising or exaggerated ego justifications.

Here is a breakdown of each track on Invasion of Privacy by self-reference percentage: 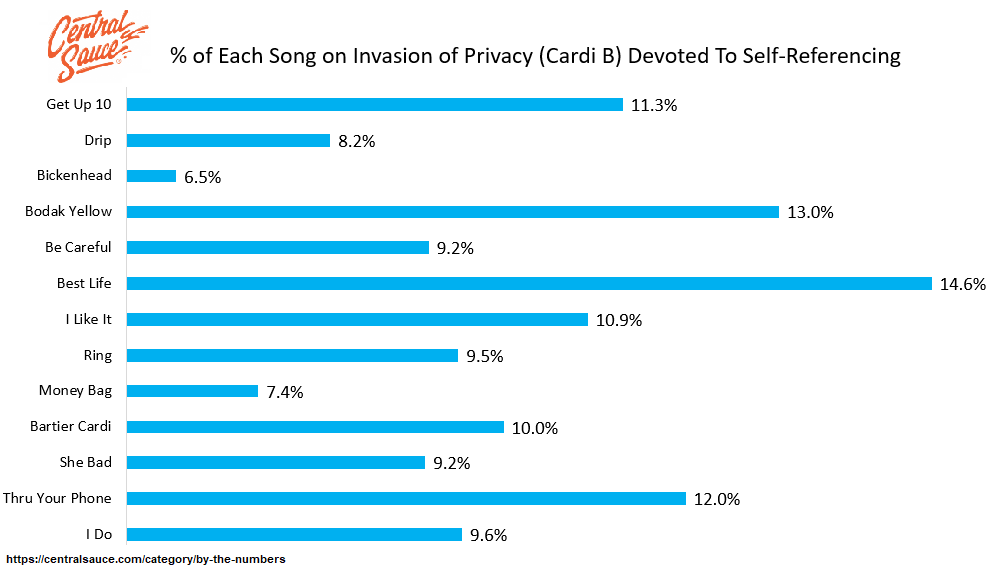 Kanye West’s ego is unmatched in rap, so the assumption goes. This trope was debunked last year in an analysis which tracked the self-references of 11 major artists, placing Kanye at number 7. This trend continues in 2018, despite his two projects (ye and KIDS SEE GHOSTS) delving into the most personal content of Kanye’s entire career. ye is an unprecedented statement on mental health, devoting 18.3% of the lyrical content to Kanye’s struggle with mental illness, far more than any other number 1 album so far 2018. KIDS SEE GHOSTS follows a similar trajectory, and, alongside Kid Cudi, Kanye brilliantly describes the personal struggle behind severe and long-standing mental health issues on the record.

Despite the personal nature of these records, Kanye still doesn’t reference himself more than Nicki Minaj does on QUEEN, but it’s interesting to note that these two projects feature a higher percentage of self-references than any other Kanye album: 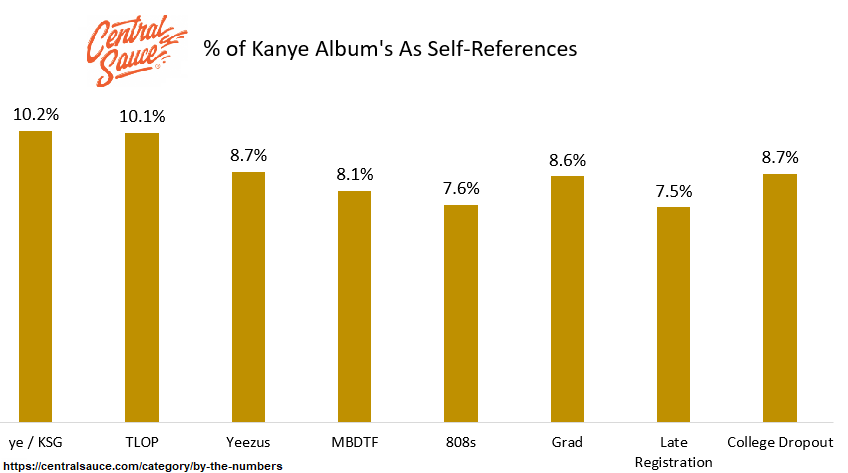 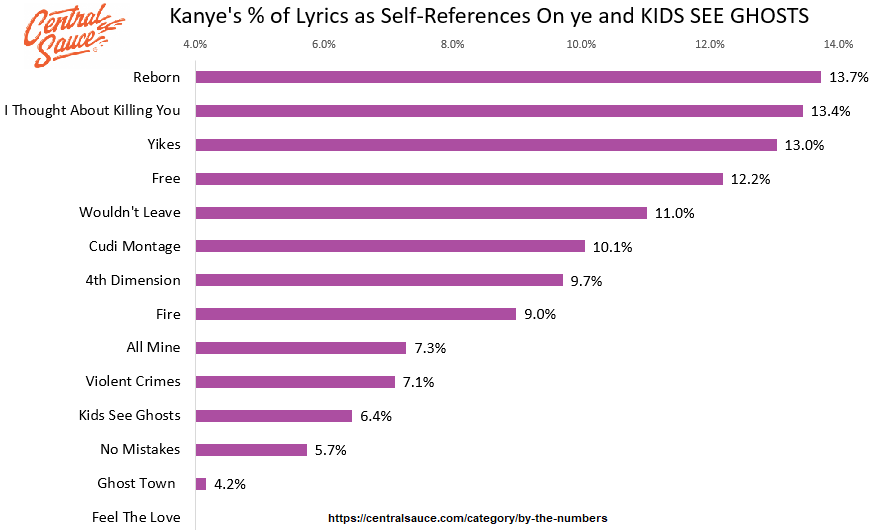 “I Thought About Killing You” deals with both third-person and direct self-references, yet even that track doesn’t have a comparatively high percentage. A lot of the track deals with existential matters, and focuses the introspection on mental health as a whole, with Kanye using his dark thoughts and experiences to make a point about just how lonely and desperate a human mind can get. This is indicative of both records, and Kanye’s discography in general. He often applies his own experience to the world around him (Yeezus and 808s & Heartbreak especially), creating an authenticity that fans connect with. The myth that Kanye is overly self-focused and self-obsessed has never been backed up by the numbers.

Drake is the least self-obsessed in this analysis, with just 8.8% of Scorpion’s lyrics containing self-references. Scorpion‘s R&B side, or Side B, is significantly less internally focused. 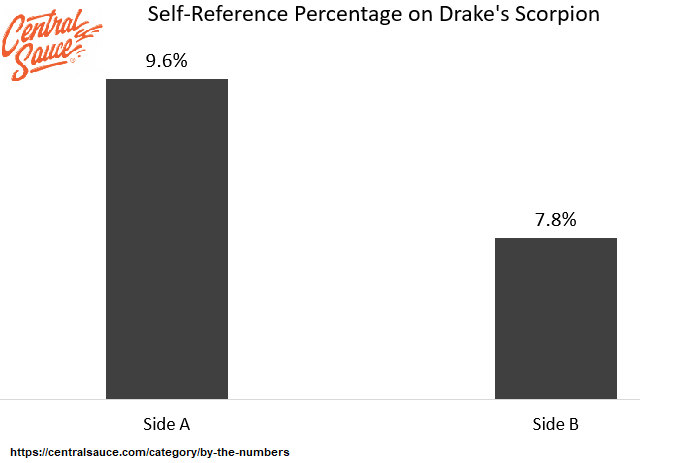 There isn’t a lot to dissect with Drake’s lyrical content here. Despite Side A dwelling heavily upon his beef with Pusha T and Kanye West, with Drake expressing the need to defend his own value system and his own actions (“Emotionless”, “Survival”), he doesn’t devote the majority of the attention to himself. Side B is emotional Drake, and although it’s implied most of the tracks and emotions are his own, he manages to avoid diving too far down the self-obsessed rabbit hole, often displaying empathy and addressing his woes to the women he (selflessly, at times, especially on “Jaded”) gives his heart to. 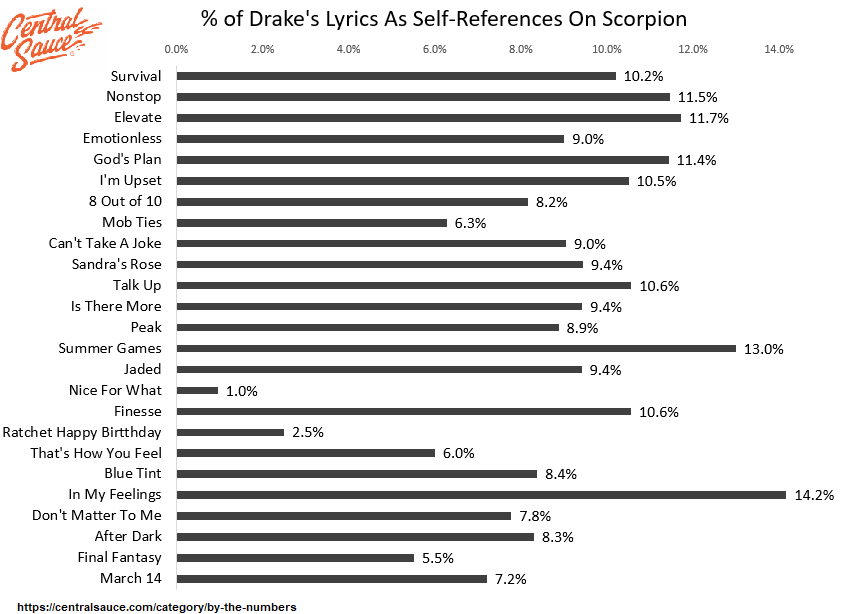 Off the evidence of Nicki’s post-album campaign, in which she blamed poor first week sales on everyone from Spotify to Travis Scott’s daughter, QUEEN’s focus on self is unsurprising. Nicki’s public comments haven’t shown much empathy or thought for others. QUEEN’s title alone betrays her mindset; it’s her fourth album, she is the most successful female rapper of all time, yet she speaks as if she has more to prove than Cardi B, an artist on her first solo album.

Nicki uses the word “I” far more than anyone else in the analysis: nearly 200 times more often than Cardi B and even more than Drake does on Scorpion, which is a double album: 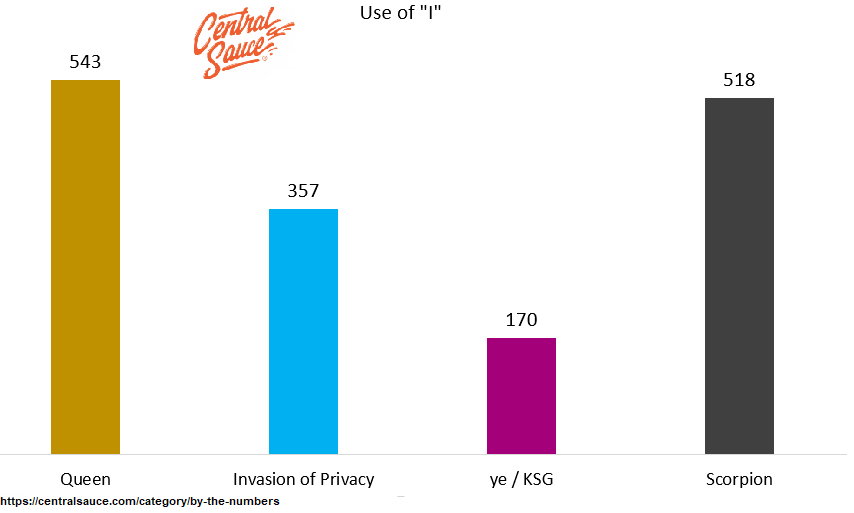 This is also significantly higher than any other of Nicki Minaj’s albums: 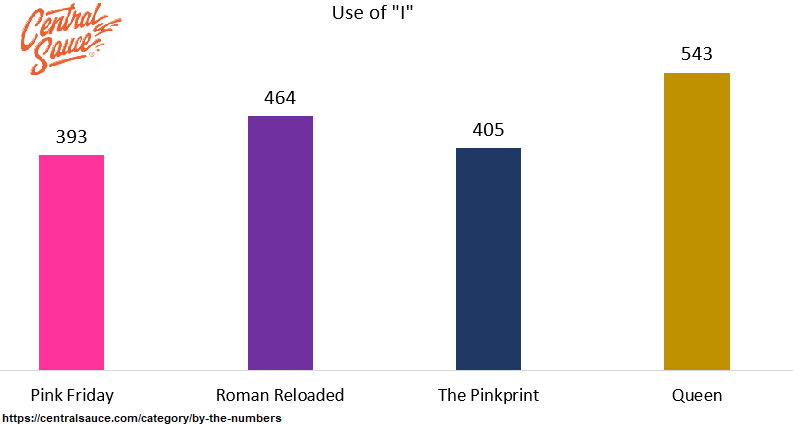 This thirst to express herself shines through on “Thought I Knew You”, “Barbie Dreams” and “Ganja Burns”, all introspective tracks that dive into Nicki’s motivations and emotions through times of both vulnerability and power.

However, the numbers don’t always back up the assertion that her self-referencing comes from a deep desire to prove herself. “Majesty” and “Coco Chanel” feature Eminem and Foxy Brown respectively, two rappers one might expect Nicki to dearly wish to prove herself against, yet neither features a high percentage of self-references. Here is a breakdown of every track on QUEEN: 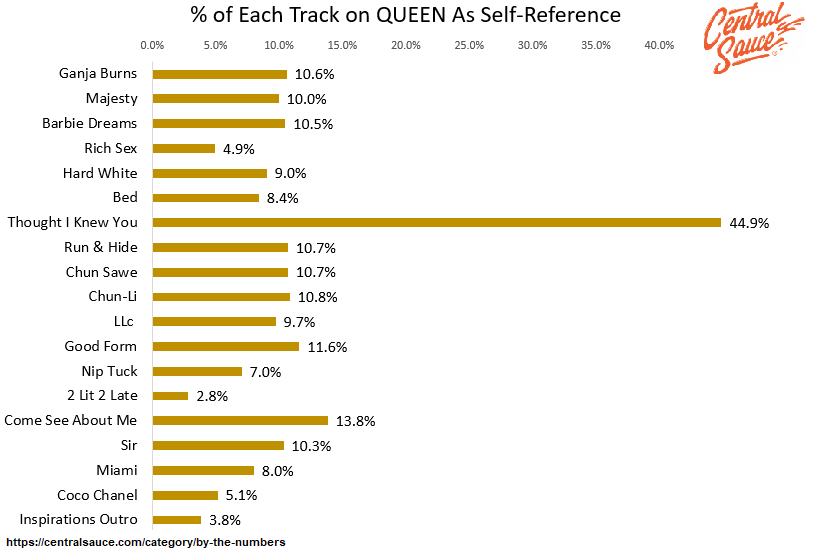 It’s the more introspective tracks, like “Come See About Me”, “Thought I Knew You” and “Good Form” that feature higher percentages, pointing to Nicki merely being more personal, rather than aggressively attempting to prove her worth as an emcee in 2018. Additionally, there is no strong correlation between how often Nicki references herself and how often she raps, which implies that her self-obsession is not born from the need to prove her ability as a rapper.

This conclusion still aligns with the theory that Nicki is insular on QUEEN and the accompanying promotion cycle. Although QUEEN is a record that’s not only about Nicki, it feels as though it’s for Nicki. And her rhetoric and behavior since the release gives this impression as well, with the numbers to back it up. 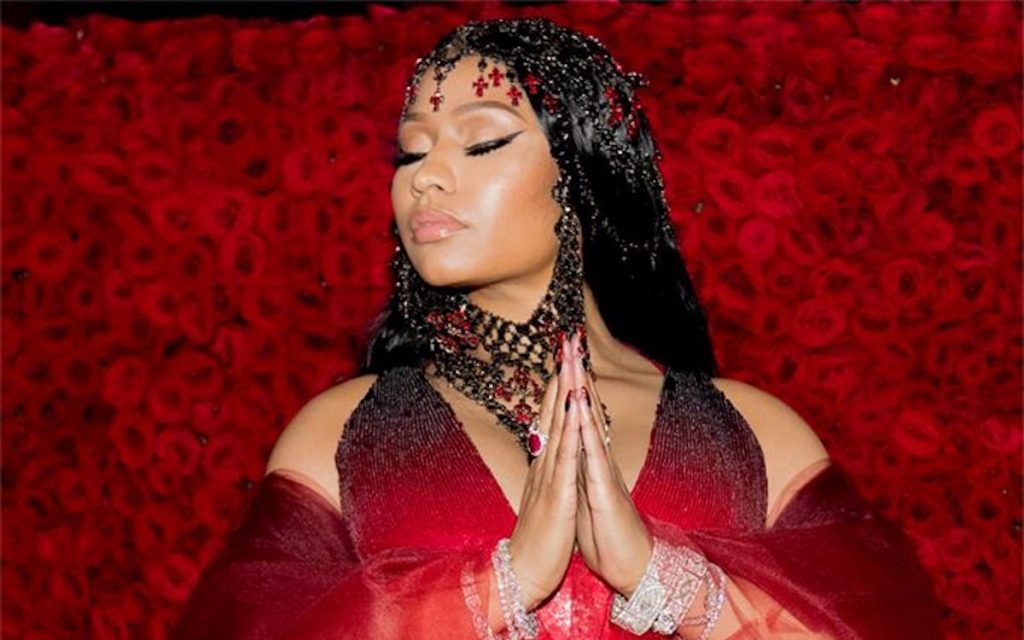