CentralSauce » Why We Like It: KIRBY’s “Superpower” Ft. D Smoke

It’s always a great day when something as strong as “Superpower” ends up in our SubmitHub inbox! A collaboration between Mississippi singer KIRBY and Inglewood emcee D Smoke, the track hones in on powers that aren’t treated as such.

In a world where blackness is so often persecuted, KIRBY and D Smoke find the heroic in their melanin, pushing back against wider stereotypical perceptions and affirming not only themselves, but anyone wise enough to listen.

Chances are, whether you knew it or not, you’ve been a KIRBY fan for a minute.

The determined singer-songwriter who worked her way into Roc Nation with a daily original song challenge, KIRBY had a hand in tracks such as “Only One” and “FourFiveSeconds,” written alongside Kanye West and Paul McCartney, among others. She’s put pen to paper for Demi Lovato songs, Ariana Grande tracks and Beyoncé jams, but in 2020, the prolific songwriter has firmly stepped out in her own right.

“Superpower” is just the latest in her blockbuster year. A dreamy open gives way to the crisp drums and flair-laden bass over which KIRBY sings, her powerful affirmations rooted in identity as a wordless refrain circles that central idea: “we got superpowers.” D Smoke enters on an ambling cadence, the laidback flow taking a conversational tone as he lets loose his heady bars. Fleeting allusions to Aquaman and Superman give way to mentions of “Trayvon up in heaven” and a want that children “see the light in darker things.” As his verse segues back into KIRBY’s dreamy melodies, D Smoke closes on a dextrous sentiment: “superheroes and sheroes with POs accusing us of moving kilos, still always moving love.”

That’s as powerful a bar as “Superpower” holds. It’s a pointed refutation of stereotypes and profiling, one that pulls from a long and shameful history of police violence. That runs all the way down to the album art, which shows KIRBY and D Smoke split in the centre by an arrangement of photos depicting Rayshard Brooks, George Floyd, Breonna Taylor, Ahmaud Arbery and Philando Castile.

In daring to present their heritage as a superpower in itself, KIRBY and D Smoke push back against a world that’s determined to keep them down – and challenge the very stereotyping that plays into those injustices. 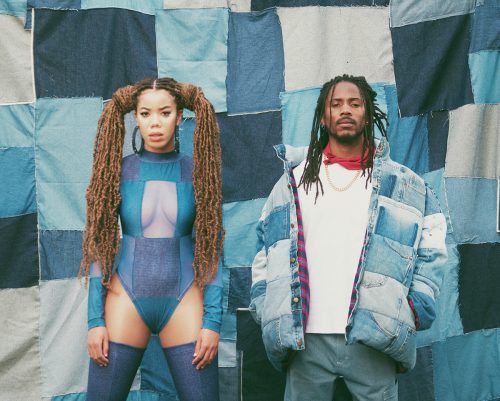 It’s a great time to be a fan of KIRBY – earlier this year, she released her debut record, Sis., featuring singles “Kool Aid,” “Don’t Leave Your Girl” and “We Don’t Funk.”

A remix of album track “Velvet” made an appearance on the stacked soundtrack to the fourth season of Insecure, featuring New Orleans emcee Lucky Daye, and a remix of “Apple” found KIRBY working with Philly singer-songwriter Pink Sweat$. She also guested on the remix to Luke James’ “all of your love,” and scored a track on the Unpregnant soundtrack with “I Love Me Too.”

Needless to say, there’s a lot of positive affirmations at play, and I’ve no doubt there are more on the way. If you’re like me, and you’d like to stay wise to KIRBY’s new music, you can tap in on Facebook, Twitter, Instagram and TikTok.