CentralSauce » Inside the Allegory of KIDS SEE GHOSTS: Demons, Ghosts, and Self-Transformation 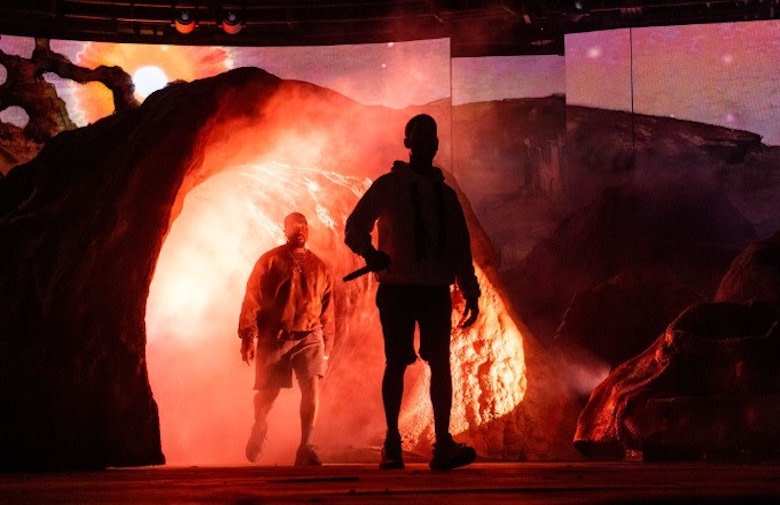 The supernatural themes of Kids See Ghosts morph throughout the album. Kanye West and Kid Cudi act to reframe the societal perception of mental illness through the personification of their shackles and saviors as ghosts. After a full year of the album, we analyze how these two creatives came together to flip the script on stigma and reframe perceptions of mental health, bringing hope to listeners across the world.

Contemporary society discusses the topic of mental health with increasing abundance. The push for the public to maintain a healthy status in their own brain, as well as considering the health of others, is met with a vocal ignorance from some pockets of civilisation. Sadly, stigmatisation means that the woes of many sufferers are gone untreated and underestimated.

With Kids See Ghosts, Kanye West and Kid Cudi look to redefine what mental illness is in the eyes of those who dismiss its very existence. They grab the listener and thrust them into their world of phantoms, fire and freedom, detailing their pain and relaying the lessons they learned from it. Kanye and Cudi draw from the spiritual realm to discuss their mental illnesses as a metaphor for ghosts — before reframing that idea completely. Kids See Ghosts is a mantra that shifts delicately in form as Kanye West and Kid Cudi quest for peace and enlightenment.

Lyrically, the songs on Kids See Ghosts are postcards from the minds of Kanye and Cudi at varying points during their war with mental illness. Surrounding the release of the album Kanye announced that he had been diagnosed with bipolar, while the subject matter of Cudi’s music has always highlighted his struggle with depression.

Kanye’s and Cudi’s respective battles with bipolar and depression have been on display for a while. A month prior to the release of Kids See Ghosts Kanye went viral after an interview at TMZ. He was shown preaching to the entire office after the interview about his experience with bipolar, politics, and everything in between.

Kanye opens up about his private struggle with opioids after getting liposuction, and thinks America is drugged out. For more: https://t.co/oAOu2DNSmZ pic.twitter.com/qFTUyxsavI

In a later interview with Yahoo Entertainment, Kanye’s wife, Kim Kardashian, stated when Kanye is “ramped up, he can’t control what he says,” implying his erraticism was due to his mental condition.

Kid Cudi laid his struggles out very publicly in 2016 when he announced his arrival in rehab for suicidal thoughts and depression. In a Facebook post he explained his recent feelings:

We have known Cudi since the late 2000s, and the timeline of his struggle is a long one. His pain is palpable not only in this message but in his music. “Don’t Play This Song“, the 2010 track from Man on the Moon II, features some of Cudi’s darkest moments as he raps, “My mom’s calling/ think I should hit decline/ I’m numb faced while thinking ‘bout suicide.”

Cudi’s quest for mental peace has not stopped since then. Each record since his breakout 2008 mixtape, A Kid Named Cudi, has contained moments of immense introspection and angst that relate to his ongoing struggle with mental illness. His 2016 solo outing, Passion, Pain And Demon Slayin’, brings his focus on Demons as an analogy for his illness directly to our attention based off the title alone. Demons have often been a prominent staple of Cudi’s music, dating back to his 2009 unreleased track “Angels & Demons.” The “ghosts” referenced in Kids See Ghosts relate strongly to the demons both Cudi and Kanye have faced.

The word “demons” is referenced regularly while in discussion of mental illness, stemming from the backward views of people in the middle ages. Historical psychiatry researchers Carlos and Fernando Espi Forcén carried out a study on the link between what was perceived to be demonic possession in the middle ages and mental illness. An exerpt of their paper states:

We have selected some cases of demonic possession from thirteenth-century literature. In the description of demoniacs we have been able to find traits of psychotic, mood, neurotic, personality disorders and epilepsy.” – C. & F. Espi Forcén

The demonisation of regular mental illnesses continues to this day and has become a part of mental health jargon. Kanye and Cudi blend this with what society has taught us about ghosts — teachings that come from television and movies.

The popular perception of poltergeists is evident in Hollywood’s repeated fall back on ghosts and ghouls as classic antagonists. Franchises like The Conjuring and Insidious set spirits up as bloodthirsty villains, looking to feed on the livelihood of families who have moved into a new home. In these and similar cases, the plot rests on the unimaginative thought processes of adults compared to the perceptive minds of kids. 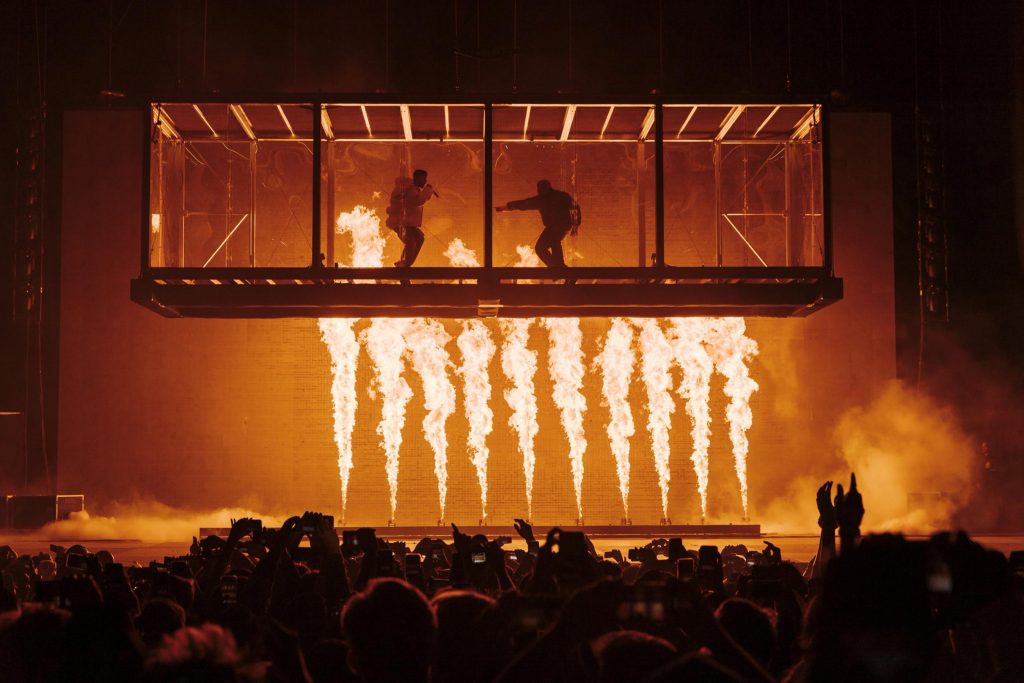 A ghost’s interactions with children is something horror movies have a tendency to bring to the forefront of the screenplay. Commonly, kids in movies see ghosts before any non-believing adult realises that the entire household is crawling with the hellish beings, reflecting the reality of children being susceptible to mental illness in a society that heaps pressure on them.

Hollywood perpetuates our definition of a ghost. The media we consume blends ghosts and demons into one, giving Kanye and Cudi a stage to document their battle with mental illness, using ghosts as a metaphor. They play the classic roles of both being possessed by ghosts as well as lashing out against haters, people who amplify the voices of the demons that possess Kanye and Cudi.

We see the effect of this possession on songs like “Feel The Love” where Pusha T lends a verse exploring the luxuries he has been afforded due to his celebrity; before Kanye West arrives and destroys any sense of tranquillity on the song by ripping his vocal chords to shreds. Yelling gibberish, gun-like sounds to interrupt Pusha, Kanye’s performance turns the curtain of fame to dust, exposing his mental turmoil. 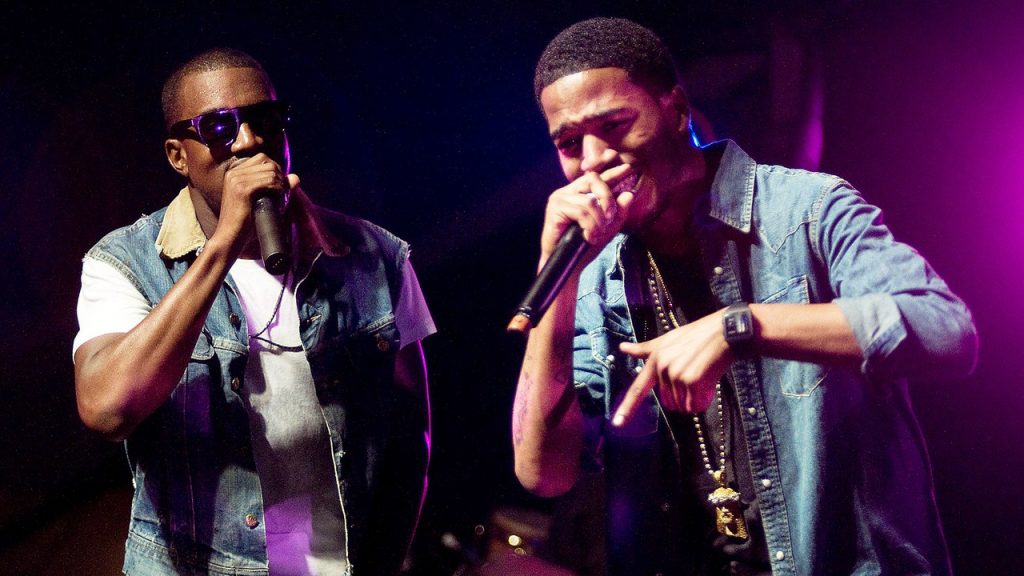 The word “ghost” has connotations of villainy — mirroring the stigma that surrounds mental illness. For centuries those who have suffered from such diseases have never been treated equally to those who have physical illnesses like the flu. Sufferers of bipolar and schizophrenia have been cast to the outskirts of society and labelled as “crazy” while those with depression have been continually told their illness does not even exist. These victims and children in horror movies are chastised alike; the disbelieving blaming those in pain for their own suffering. Despite extensive research from psychiatrists on the severity of these conditions, numerous members of society continue to see blank spaces where others see ghosts.

Related Sauce:   25 Years of Illmatic: The Producers and Samples that Created a Classic

How Kanye & Cudi Flipped the Script

Kanye and Cudi find a moment of clarity on “Reborn”, invigorated to move forward, past their dark histories. Kids See Ghosts now becomes a mission to reframe mental illness, and Kanye and Cudi do so by reframing the idea of a ghost. They focus on ghosts as beings of the afterlife, beings with connection to heaven, beings closer to God. Signified by Yasiin Bey’s hook, “Kids see ghosts sometimes/ spirit/ now that’s the king,” Kanye and Cudi no longer are faced with the demons haunting their brains, but angels that are stimuli for spirituality and recovery.

The religious tones which Kids See Ghosts ends on creates a disparity with the demonic possession they had experienced at the album’s start. With free references to angels and God spread across the final two tracks, Kanye and Cudi show us the ghosts they see post “Reborn”.

Angels are seen as spirit guides in many religious circles. According to Learn Religions, guardian angels “bring to you only what will help you.” Just as they applied the connotations of demons to ghosts, Kanye and Cudi shed positive light on the spirits they now see — angels who will help them battle their mental conditions. These ghosts could represent divine intervention, people in their lives who have nurtured them, or even idols whose entertainment provided relief from their suffering.

Kanye introduced the idea of idols acting as spirits on his song “Yikes,” rapping “I can feel the spirits all around me/ I think Prince and Mike was tryna warn me.” Kanye frames his inspirations as spirits who guided him, possibly the exact same spirits referenced throughout Kids See Ghosts. Becoming ghostly figures themselves, Kanye and Cudi become the relief, the inspiration and the hope for kids who feel overwhelmed by their ghosts — they know this story is not specific to them. 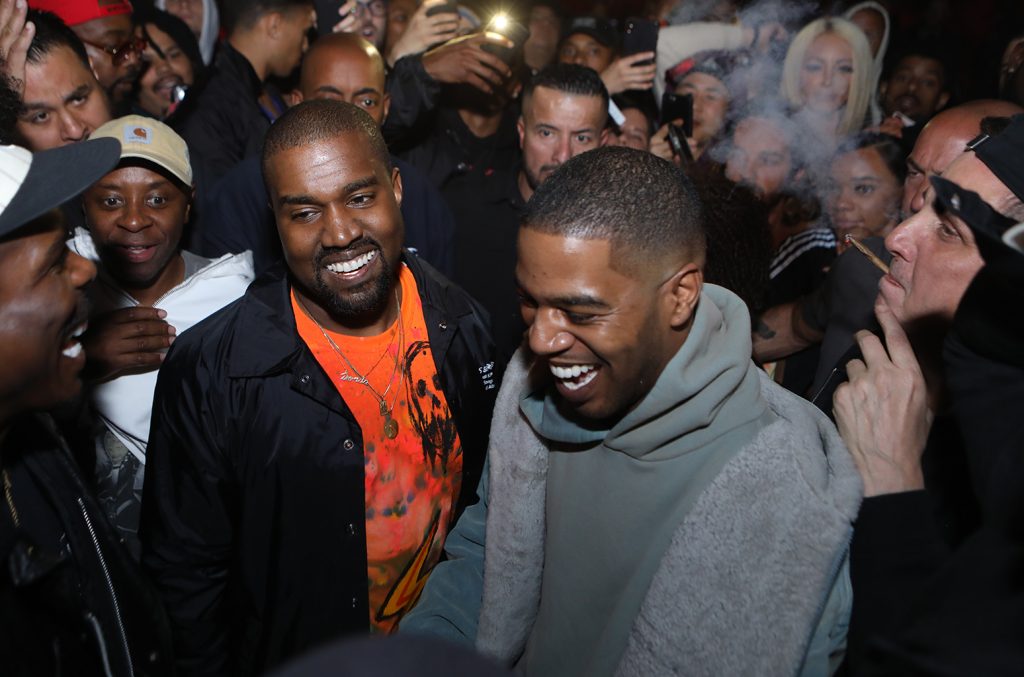 So many of us can relate our own stories to those of Kanye and Cudi. Crippled by their ghosts, lacking understanding of their nature and the power to rise above them. This is the case for the millions who suffer from various mental illnesses — the same millions whose pain is discredited daily.

The complete lack of regard for the perpetual internal battle many children trudge through has cost the lives of so many at such early ages. A kid becoming a ghost is nothing new when applied to this darker context. With so much around them designed for these kids to succumb to their ghosts, Kanye and Cudi act as the guardian angels who can shine their light on children who were just like them. Kids See Ghosts is the vessel with which sufferers of mental illness can find solace from the demons that haunt them and find hope in the story of two kids who became ghosts.