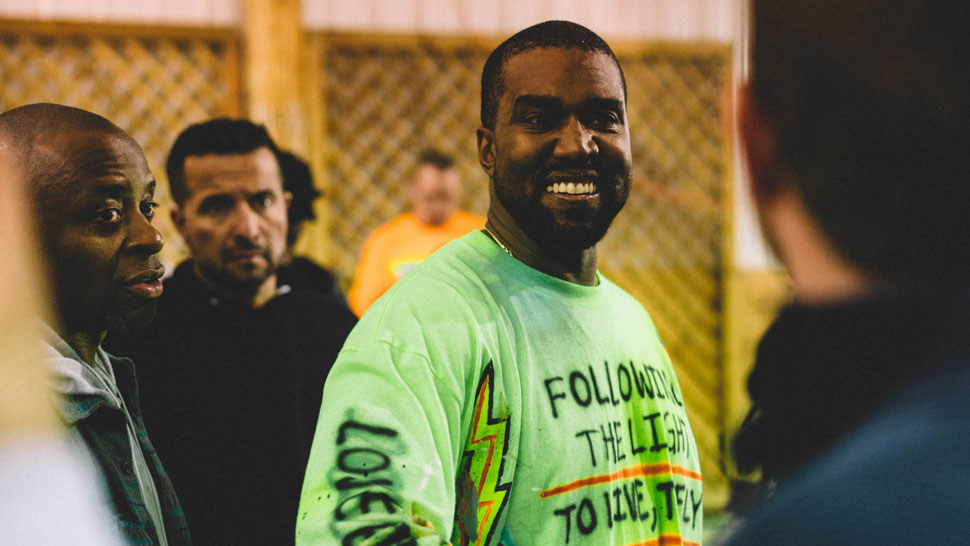 The wait is finally over.

Kanye West’s 8th solo album ye has arrived with critical acclaim and a wave of controversy, as we’ve come to expect from Kanye. But despite the familiar reception, ye feels quintessentially different than any other Kanye West project we’ve heard so far. The shorter format certainly contributes to the unusual experience painted within the album, but it’s more than that.

ye feels so strange while also so familiar because of its subject material: vulnerability, honesty, and mental illness. The honest and direct exploration of Kanye West’s depression and bipolar disorder in both ye and his collab album with Kid Cudi Kids See Ghosts isn’t just a new direction within Kanye’s discography – it’s a theme that’s largely new to hip hop.

18.3% of ye is devoted to mental illness. In a solo career already propelled to top-tier artistry through deliberate and genre-changing left-turns (808s & Heartbreak in 2008 and Yeezus in 2013), 2018’s ye is Kanye’s biggest risk, and triumph will equal his smallest pay-off. But quantity lags behind quality when measuring the success of his newest record.

Sufferers of mental illness have found little solace in the words and message of mainstream hip-hop since the birth of the genre. As culture grew, so did the overt displays of braggadocio, machismo, confidence, arrogance, and materialism, not concepts typically found in the tool-kit of those harbouring a mental health issue. Recent mainstream forays into this sunken place have been hollow and overblown (Logic’s “1-800-273-8255”), uplifting and indelicate (Eminem’s “Not Afraid”), and non-existant (almost everything else). 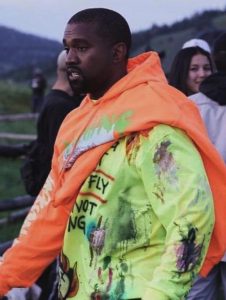 Those in these sunken places must mine the discographies of popular artists to uncover songs they may be able to connect with, and even then, the songs and verses are nestled amongst a slew of tracks deriding weakness. DMX’s 4th album was named The Great Depression, and he possesses some of the darkest rap verses of all time. Notorious B.I.G. has a song titled “Suicidal Thoughts”, Jay-Z rapped “Love, I don’t get enough of it” on Kanye’s 2010 track “Monster”, and connective songs and verses exist deep in the discographies of Lil Wayne, Kendrick Lamar, and Eminem, but all of these artists still subscribe to or only recently gave up the traditional rap ideals of violence, women, money, and strength. The exception is Kendrick Lamar, although when addressing mental illness he often speaks from a place of hope rather than hopelessness (“i”), and tends to focus his frustration outwards (“FEEL”).

ye is separate from this dynamic entirely. Kanye’s sample-lite production and lyrical treatment of mental illness is deep, it’s real, it’s raw, and it comes from a place no-one willingly treads. Even moreso, it’s thorough: here’s the data on every single mental health reference that Kanye West makes on ye. 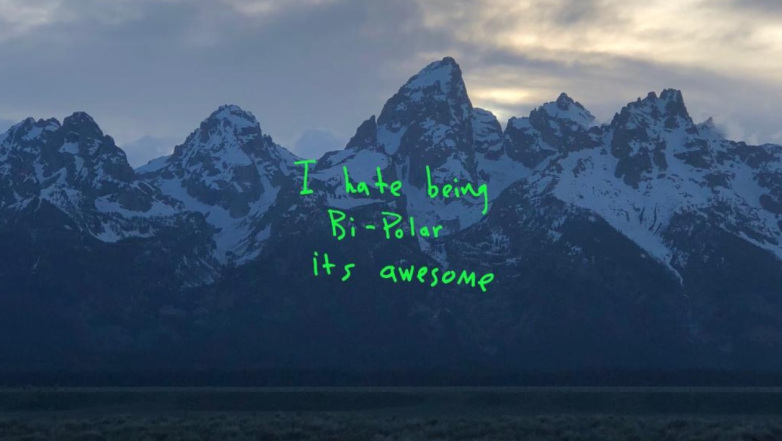 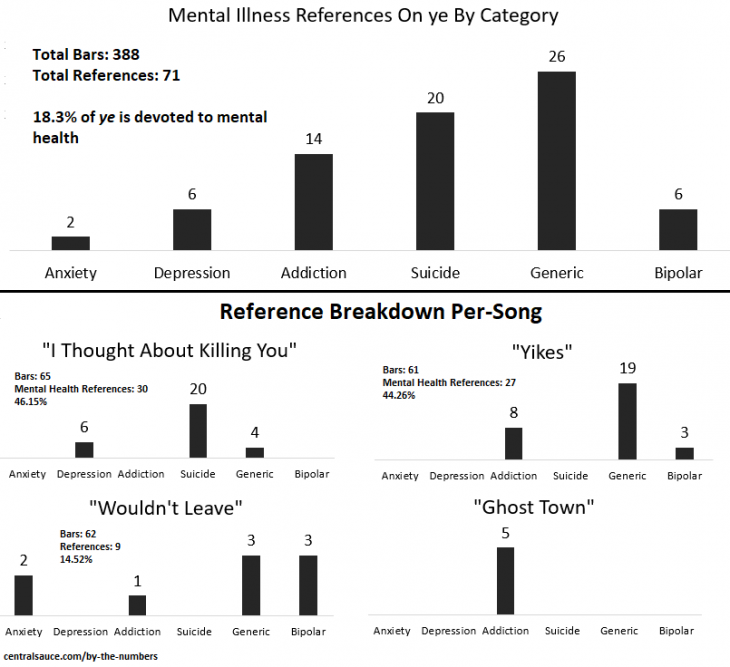 Mental Health References on “I Thought About Killing You”

From the varied pitch Kanye employs in “I Thought About Killing You”, the cover art, and his speak of bipolar disorder later in the album, it’s a safe bet Kanye is speaking to himself in this song. The immediate juxtaposition of “love” and “I thought about killing you” is jarring, especially when this statement amounts to suicide, but it’s informed by his poignant bar about the depressed mind state leading to this sentiment:

“The most beautiful thoughts are always inside the darkest”

Further insight comes with “Just say it out loud, just to see how it feels”, which is great advice, usually given by a carer or concerned party. But Kanye takes it left immediately, with “Weigh all the options, nothings off the table”. Given the suicidal nature of the track, these lines sound like the cries of a desperate person, pushed to the edge of life by dark thoughts.

They may also describe the seemingly contradictory phenomenon of suicide as a calming, even liberating idea. These dark thoughts can cage a human mind, bury it so far beneath the surface of life no light exists, and no escape seems possible. The frustration of being buried while everyone around you lives, breathes, thrives, tightens the walls, reduces the oxygen in this cave. Just the idea of suicide, an escape, another route, can provide oxygen, breathing space, a tiny glow in pervasive darkness. It need never be acted upon; just knowing it exists, having it on the table, can be enough to spark hope, and a human can survive on a spark. 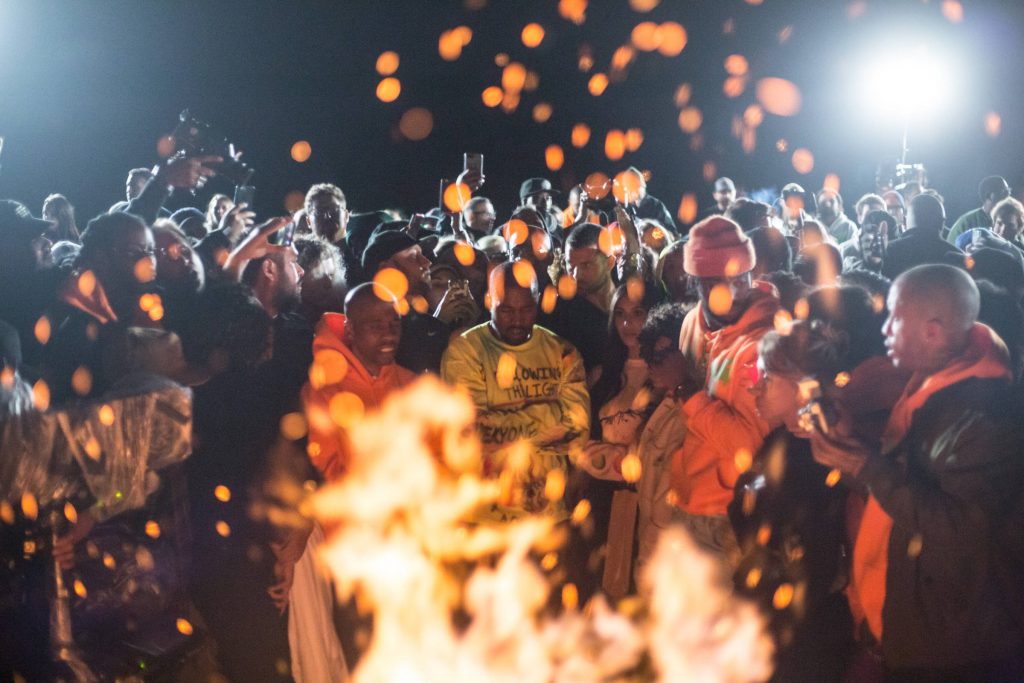 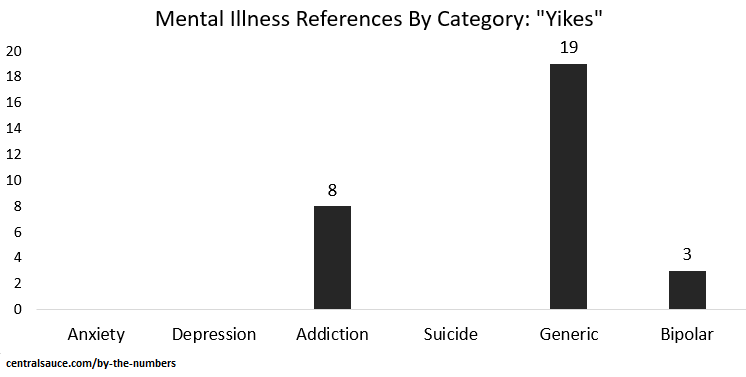 The outro for “Yikes” is the most important of Kanye’s career, and this includes “Last Call”, Kanye’s legendary outro on The College Dropout. In 8 lines Kanye empowers and uplifts sufferers more than any hip-pop single about overcoming adversity. Because adversity exists, it dwells within, sometimes indefinitely, with no reason, no solution. And through this, people are ostracized, pushed to the edges of society, made to feel weak or unworthy by stigma carried out covertly but in a tangible way.

“You see? You see?
That’s what I’m talkin’ bout
That’s why I fuck with Ye
See, that’s my third person
That’s my bipolar shit, n*** what?
That’s my superpower, n***, ain’t no disability
I’m a superhero! I’m a superhero!”

The answer is not always a purge of this adversity, be it bipolar, depression, anxiety, any mental health issue. Sometimes no cure, no clear path to recovery exists. Living with the condition, accepting yourself as you are, becomes paramount, and Kanye ends this song, one that begins with frightening and menacing urges and thoughts, not with a message of hope, but an offering of reality, and it is here that listeners can truly connect. Not all mental illness can be solved, recovered from, alleviated with a big pump-up rap/pop song. Tracks like this, where the artist urges and encourages listeners to seize the moment and rise above their demons, can even be detrimental; providing their mind “proof” they are different, maybe making them feel weaker because a 3 minute pop-rap song can’t cure them, when it appears to cure everyone else.

Kanye doesn’t put it delicately, but the message of embracing yourself despite your darkness is deeply powerful and important. 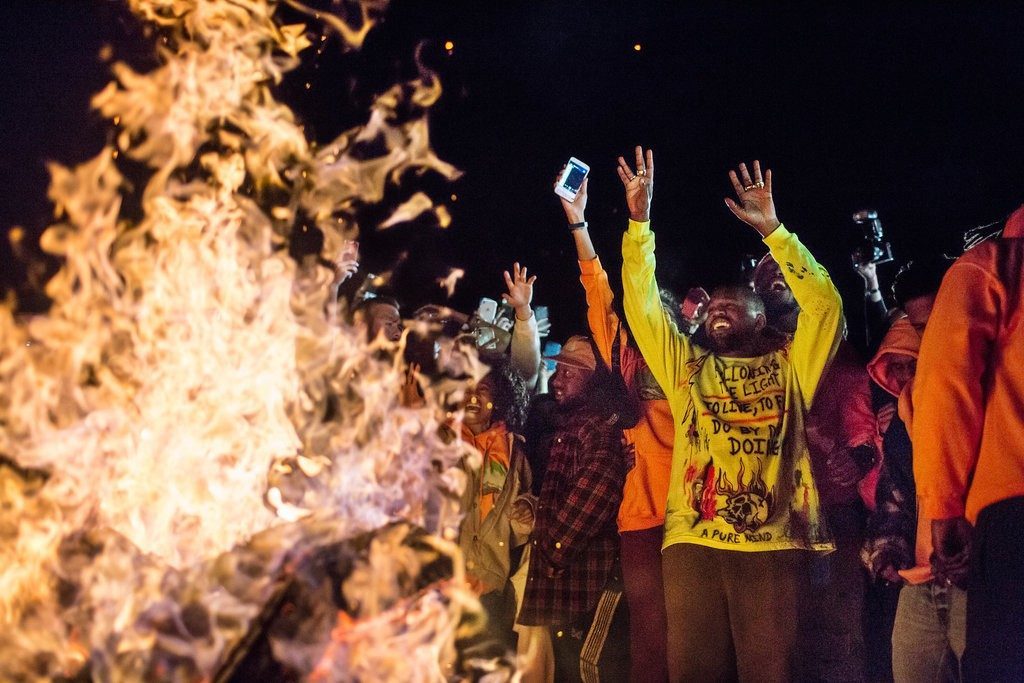 Maintaining friendships whilst battling a mental illness is hard enough. Cultivating a safe and healthy relationship with your partner, which is explored on “Wouldn’t Leave”, is almost impossible without strength and sacrifice from both parties. Finding another human who you not only love and adore, but who is willing and able to endure this pain with you, help drag you through it, or, just sit in your cave with you whilst the storm rages, is true beauty.

“Told her she could leave me now, but she wouldn’t leave”

No relationship should feel like a cage, yet they form surprisingly quickly. They exist out of constructed needs, and a mental illness can quickly turn partner to carer. Kanye opened the cage door, allowed Kim the freedom to leave, and in it, found no cage existed. 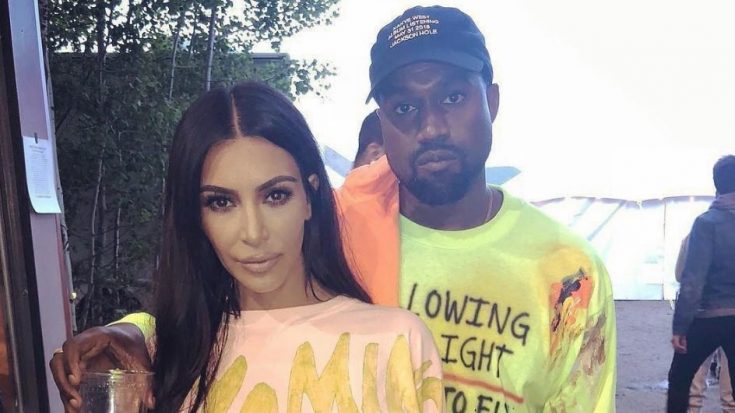 All 5 references on “Ghost Town” relate to addiction, including one dalliance with the devastating drug fentanyl, which took the life of Prince and Lil Peep. Yeezy battled an opioid addiction in 2016, and fentanyl is a painkiller in this category, although one of the most potent examples on the market.

Excess is emphasised, painting a picture far darker than someone popping pills just to party. 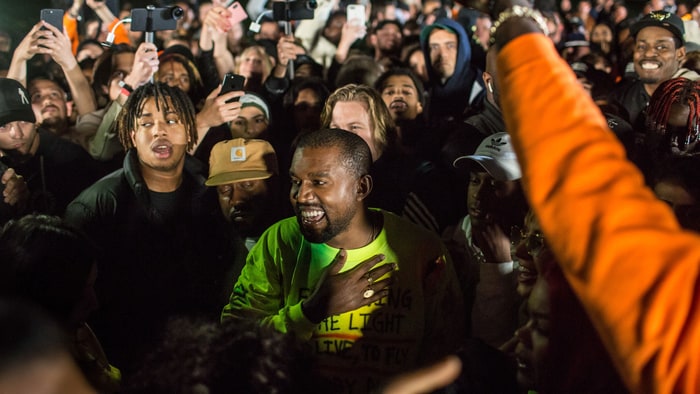 Why is Kanye’s Statement on Mental Health So Important?

Kanye’s mental health problems combined with his erratic behaviour and created ye. Whilst very few could ever relate to the problem of going on TMZ and hurting the Kardashian brand, the other messages on ye tap in to a group in society that rarely, if ever, have their story told by a mainstream rapper (or pop artist). This album is essential, it’s a touchpoint for people trying to connect with others suffering. An escape for those surrounded and suffocated by social media, and the desperation to be viewed as normal, happy, successful. It’s a piece of music that reaches into the bedrooms of the people beaten so far down by illness they have withdrawn from most, if not all, aspects of life. This audience may be tiny in proportion to Kanye’s traditional fan base, but they need this, they’ve needed it since rap began, since they fell in love with the genre and searched for meaning in the words of their idols. Finally, a piece of hip-hop exists for them. 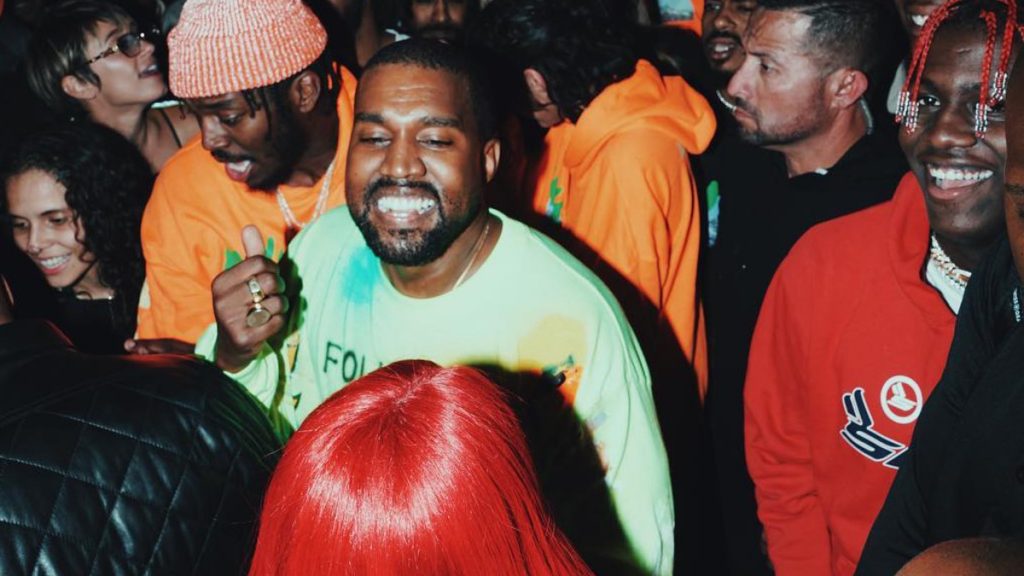 Why This Album Is Important To Me

10 years ago I was hospitalized for a panic attack, and subsequently diagnosed with anxiety, obsessive compulsive disorder, and depression. I held it together for 3 and a half years, finishing my degree, holding down a job, cultivating a long term relationship with a girl I adored. And then, in the space of 6 months, I lost everything. I had begun to slip quickly into a damaging anxious mindstate, and this, coupled with medication changes, sent me into a spiral of anxiety, depression, exercise addiction and anorexia. I have spent the last 6 years in this truly sunken place. I’ve been on over 30 combinations of medication, I’ve had 12 different psychologists, 3 different psychiatrists, and I’ve been told on 14 separate occasions (yep, I counted) that my illness was permanent, and recovery would be incremental, at best. I almost died twice, coming within inches in 2014 thanks to anorexia.

Mental illness is something I have had to come to terms with, accept as part of me, part of my life, and accept that I may always be limited in the eyes of society.

It’s not been easy, being a hip-hop fanatic who also has a mental illness. Rap often derides weakness, and a mental illness feels like a huge weakness, especially when a sufferer compares themselves to those around them.

Listening to ye, hearing Kanye speak these thoughts and feelings, ones I had to bury deep enough to keep from the judgemental eyes of those around me, was invigorating. Not because a celebrity has experienced such pain, this isn’t something I’d wish upon anyone. But reducing the stigma around mental illness is a long and lonely path. It can get you ostracised, removed from group chats, unfollowed on twitter, and can strip your social circle of all but the most dedicated. The fight to just be accepted feels endless, and at times, pointless, especially to a group of people already struggling with pain and dark thoughts.

I really just want to thank Kanye, from the bottom of my heart and soul. You’ve created a piece of art that I can show people, easily digestible and understood, that goes some way to explaining what happens inside our minds and hearts during this mental health battle. An album that now exists, and can never be taken away, as proof that we are not alone, we aren’t to be feared, and proof we can speak out, that we re justified in this fight, that we aren’t alone on this path.