“Essential & Unheard” is a series that highlights awesome music that probably flew under your radar each month. Learn why MIKE’s “Tears of Joy” made him the first ever artist to be featured twice on Essential & Unheard, and check the playlist for 20 tracks songs that just missed the cut—all by lesser-known artists that deserve a helluva lot more recognition.

June is done and I got a public service announcement now that I’m back spitting words at you through the internet: EVERYONE NEEDS TO CALM THE FUCK DOWN.

Seriously, y’all are taking everything too serious right now. The “hot girl summer” shit has been taken to unnecessary lengths, for one, and everyone seems to be weirdly combative about music on Twitter right now. It must be #DreamvilleSzn. But seriously, sometimes you just like music that isn’t good. The guy you found on YouTube a week ago? He’s not the next best thing, and he doesn’t need to be to justify your attachment to the music. Your “tastes” or “likes” aren’t universal, no one knows you and they don’t really care what you think anyway. (This is, maybe, mostly a reminder to myself.)

All that said, I’m going to now write about a bunch of music I liked this month so, yes, I am a hypocrite. Let us begin.

I had so many valuable thoughts in the course of listening to the Mustard album, like how Quavo thinks “ting” is Canadian slang because our debonair Canadian cultural appropriator Drake started saying it after a trip to The Islands, or how much I like the Nav feature on “Baguettes in the Face” (am I a closet Nav fan??), but these thoughts were replaced when I got to “Perfect Ten.” The only thought I was left with is, “they really took Nip,” and it’s the only thought I’ve had since. RIP Nip. The Marathon Continues.

I want to take a moment and spotlight some lighthearted nonsense also: cue Zack Fox and Kenny Beats. I showed “I Got Depression” to my friend (who doesn’t really like rap and who doesn’t know who Zack Fox or Kenny Beats are) and she looked at me like I just showed her a video of something terrible. I mean, objectively speaking, I kind of did. But this song is also good. You know how fire an impromptu freestyle has to be to get its own release?

Picking up the pace… The music industry seems to be catching fire in Q3 and yet all of my favorite musicians are still sad as hell. I mean look at Pi’erre Bourne—trap producing lothario—and Key!—the rapping version of the kid (Kevin? all generic white children from 90’s movies are named Kevin in my head) who owned the first AirBud right after telling his star-athlete dog to leave: pure post-breakup sadness.

It’s summer though, so it can’t be all bad. We also got elite coke raps—Pusha has a verse on Benny the Butcher’s album AND on Bandana, the long awaited MadGibbs follow-up to 2014’s Piñata—and a callback to arguably the most creative way to call girls ‘hoes’ in Allblack’s “304.”

Polo G just dropped one of my favorite projects of the year with his Columbia debut Die A Legend and Lil Keed stepped out of the long and slender serpentine silhouette of Young Thug on Long Live Mexico. A strong music month notwithstanding, our featured artist is a repeat: MIKE’s standout mixtape tears of joy. 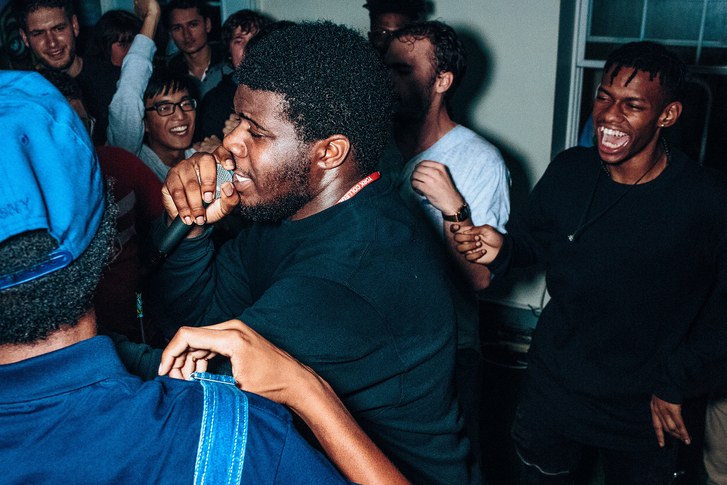 When my tears fall, I’m not really sure why anymore. I don’t cry nearly often enough, so when my eyes well up and the water runs, I’m never entirely positive what emotion is being carried down my cheeks.

On his surprise mixtape, released last week, MIKE told us what his tears were: tears of joy. There’s an admirability in being able to delineate the source of your tears, but MIKE’s joyful tears, are labeled in hindsight. You get the feeling MIKE told us those salty stores of emotion fell out of joy, in the same way we tell people around us our swollen glassy eyes are red because we’re tired: to run from the vulnerability of expression. But like the stranger who sees through nonadmissions of sadness in grocery store parking lots, we can tell there is more than joy in MIKE’s tears, there’s a lot more, he’s said as much. The cover art––MIKE’s eyes closed a hint of sadness mixing into the tears streaming from his eyes as if postured in the program of a funeral––gives away a lack of joy.

MIKE’s mixtape arrived as somewhat of a surprise. He teased music several weeks before with a video to “it’s like basketball” and, following the sublime War in My Pen released this past December, there was little reason to expect so much music so soon. But MIKE added to the four full lengths released this past year, “Four ones, let a n***a drop in the same year,” he touts.

In usual fashion MIKE’s steady voice gathers in the familiar “ayys” and “uhhs,” it’s still obscured over sample heavy loops, and it’s still unsheathed with a sharp wit and keen eye. What’s new is the new inspiration supplies the project with a sense of lurching momentum his past work didn’t quite have.

As “scarred lungs vol 1 & 2” unravels at its end, its sample pausing and holding as it slinks to completion, we’re given a chance to breathe. These chances to grab some air came in shorter order in MIKE’s previous works, but on this album, instrumental breaks like “GR8FUL 2K19” or the light and sparse duendita spot on “#memories” add to the weight of his own words. A toying control over samples and beats exists here that wasn’t as present in work as recently as December’s War in My Pen. MIKE’s rapping is progressing quickly, but it appears his producing (under alias dj blackpower) is progressing just as quickly.

MIKE’s mother was an emotional player to his past work. His physical separation from her playing something of a theme in the loosely tethered lyrical work of the 20-year-old rapper’s early career of rap-as-it-comes-up flows, where patterns were less premeditated bars and more products of consistent thought. tears of joy comes on the heels of the painful loss of his mother, here she becomes emotional fulcrum. She’s gone. His voice is still here. Her memory is still here. Still, everything is different, on “true blood” he sees the potential of the sky replaced: “Your body in the dirt, my sky turned into ceilings.”

It’s easy to get wrapped up in our favorite artist’s tragedy. Sometimes we find commonality in their struggles and we feel like we can relate, but what we overlook is the best artists are so adept at making us feel connection, not because of the similarity of our experiences, but because of their proficiency at communicating their thoughts and emotions. It takes people time to parse through feelings and thoughts—there isn’t always coherence to be found.

Whatever time MIKE has allowed himself following the loss of his mother isn’t spent ruminating on loss, specifically. His mother’s passing rendered him into stasis. Peering through a lens of loss, religion is pulling him from his sister (“sister used to get along, but now she too religious”), microphones and beats are still his receptacle for sorting past untaught lessons (“it’s a lot, I drop it in my music”), and he’s still trying to navigate a world of struggles (“all my struggles set in stone, I wish they left the Earth.”)

There may not be an answer. If there is one, its hiding in different corners of our memories, waiting to be uncovered by each of us when we sort through our personal archives for solace. Here, on tears of joy, MIKE, with the lingering smoke from a spliff, a smattering of beats standing among his finest self-productions and selections yet, and his usual gruff meditations, finds some kind of temporary solace. It lasted at least long enough for him to record and release it. For that, we’re grateful.