The date is June 19th, 2019. Welcome to the climactic final stop of JID’s “Catch Me If You Can” tour, performed  in front of a sell-out crowd in ATL.

Dreamville shirts. Dreamville shirts everywhere. As I stumbled down the stairs and onto the sidewalk in front of Atlanta’s Center Stage Theater, I ran my hand through my sweat-soaked hair and shook my head sporting an unswallowable grin.

I’ve been to more than 20 concerts in Atlanta over the last year and this was far from the first time I’d seen someone sporting one of those black tees at a show, utterly plain and unremarkable except for a single word emblazoned on the front in generic, cursive script. But this was on a new level of epidemic proportions. Everywhere you looked, that word – “Dreamville” – looked back at you, a reminder of the three cathartic hours we had all just shared with a few treasured heroes who’d finally made their way back home.

Before going any further, I want to make one thing clear. My expectations for this show were high. Maybe unrealistically so. JID is not only one of today’s most technically advanced rappers, but he (and the rest of his Spillage Village counterparts) have built quite a reputation for their live shows. Plus, I still cherished my memories from seeing Saba on his Care For Me tour last year, perhaps the most intimately spellbinding performance I’d ever seen from someone not named Frank Ocean.

But more than anything, my expectations were sky high because this was a true Atlanta homecoming. The last time JID had set foot on a stage in the A was over 18 months ago for his Never Had Shit tour. Back then, he’d performed at the smaller stage on the side of this very venue, in front of a crowd no larger than 300 people. Tonight’s setting, the main stage, was well over 1,000.

A lot had changed for the East Atlanta Playboy in that time, and the city was ready to celebrate with him on the final stop of his Catch Me If You Can tour.

“I know how y’all get down in ATL and I wanna feel that energy. This is a goddamn party Atlanta! Let’s bring this thing home!” – Saba

As the pit area slowly began to fill, anticipation began to build among one of the most diverse crowds I’ve ever seen in Atlanta. Small clusters of fans circled up within the masses to freestyle over the pre-show beats. Voices speculated breathlessly on whether JID would bring out 6LACK, EARTHGANG, or even J. Cole himself for the show. Shouts of “ATL!” and “Zone 3!” (the Atlanta neighborhood JID hails from) topped the growing din of noise as we waited for our hometown hero to take the stage.

The lights dimmed, and bass began to wash over us as the DJ set the scene with deep cuts from Atlanta legends like Outkast, T.I., and Goodie Mob. Lighters began to flick around the crowd and puffs of smoke began to settle into an atmospheric haze as we buckled in for what would become a true family reunion – Atlanta style.

Related Sauce:   Why We Like It: Chris Patrick’s “Big Black Truck” (REMIX)

“I might not be from Atlanta but this city fuckin’ made me. It’s so good to be home.” – Mereba 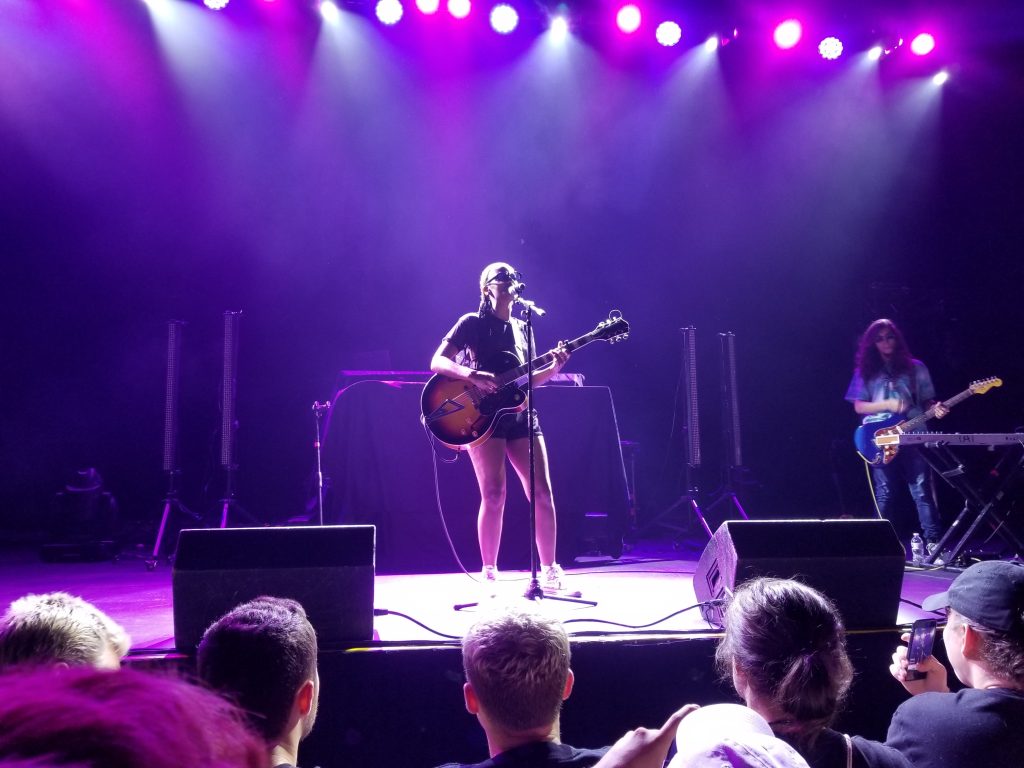 For three hours, our eyes and ears were serenaded by artists who expressed gratitude and thanks at every opportunity. We watched Atlanta native Deante’ Hitchcock stop mid-song to bow his head with his hand over his heart out of appreciation for the warm reception he’d received from one of his biggest audiences to date. We whistled and screamed for Mereba as she emotionally monologued about how formative her experiences in this city were.

Of all the night’s performers, Saba has the least connection to the City of Atlanta – but that didn’t stop him from giving back in his own way. After paying his own tribute to Atlanta, a city he called a “home away from home”, Saba used his waning, already too short stage time to perform a more obscure track from his hometown collective Pivot Gang’s recent album, You Can’t Sit With Us. After railing off a verse, Saba brought out a very special guest onto the stage: Pivot’s own Frsh Waters, who’d spent the last several years behind bars while the rest of his crew began to see their dreams come true, to perform his verse off the crew cut. When the song concluded, an emotional Frsh had moisture in his eyes and gratitude written across his face for the man by his side, a man who blew up and never forgot his roots.

As the Atlanta throwbacks began to play again while stagehands prepared for the headlining set, the crowd began to pack in. A massive moon with the words “East Atlanta Playboi” written across it was unveiled. A mic stand was placed in the middle of the stage and the lights swiveled, concentrating their energy onto the empty space behind it. A single stick of slowly burning incense and stack of cold water bottles were placed in front of the DJ booth. And the crowd packed in even tighter, all hoping to get as close to their fire-breathing idol as possible, while chants of “JID” “JID” “JID” rose louder and louder until they drowned out the interlude music.

When JID finally took the stage, he looked around a theater that was nearly shaking with applause and cheers, and doubled over as if he’d been punched in the gut. You could see how much this night, this crowd, this tour, this city, meant to him. The emotion was visible in his eyes as they recognized familiar faces scattered all throughout the room. It filled his voice as he thanked us and told us how good it was to be back after such a crazy year. JID was home. 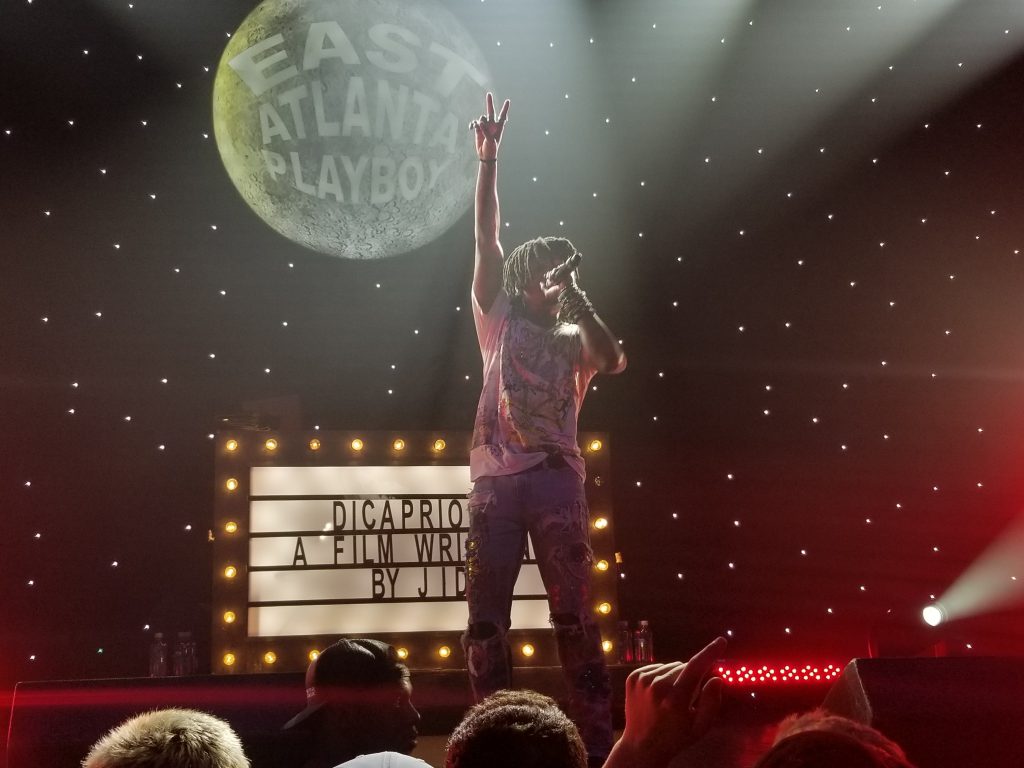 As he launched into his set, the fervor brewing in the crowd finally exploded. No matter what song, no matter how obscure, every direction you looked there was someone who knew every single word. Phones disappeared, half-smoked joints were forgotten, and time just didn’t seem relevant anymore.

“You could see the genius flow out of Mac when he was working in the booth. It was so inspiring for me to just be in the presence of such an incredible artist. He was special.” – JID

After nearly an hour of non-stop music and monologues about how much he loved this city, JID stopped the show to pay tribute to a legend: the late Mac Miller. His voice took on a somber tone as he told a story about meeting Mac for the first time in LA and the sheer awe he felt upon seeing Mac working in the studio. He ducked his head as the DJ played “Come Back to Earth” and kept his face down for the entire song, before whispering into the microphone to fill the silence as the song ended: “We miss you Mac.” 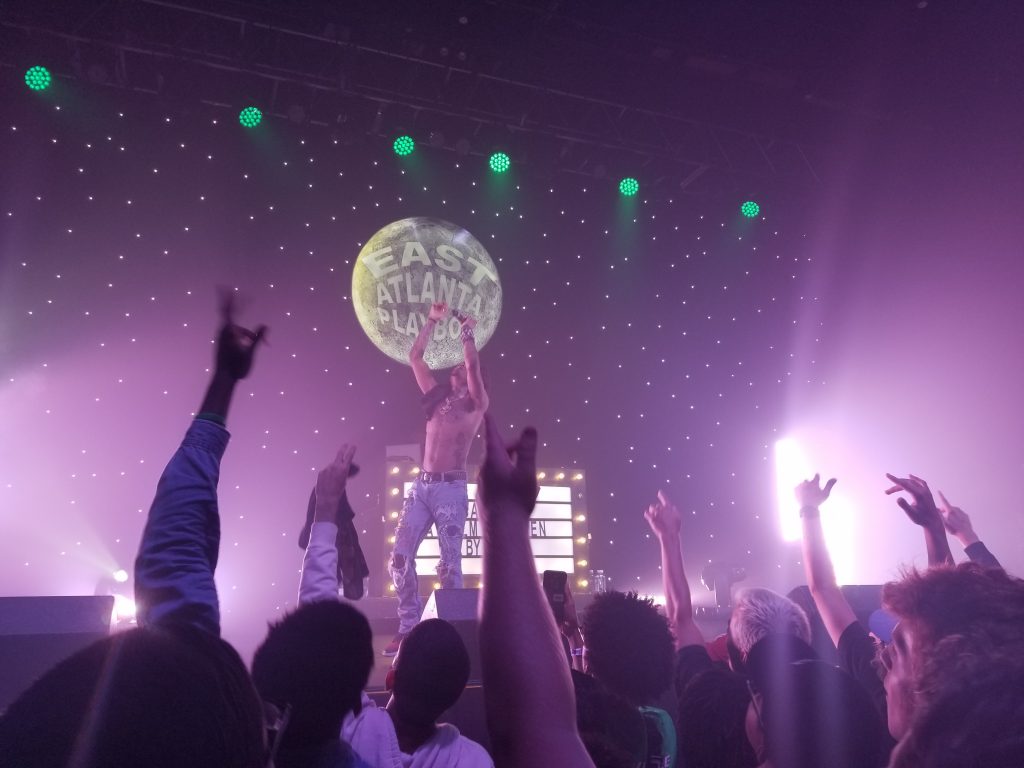 JID finished off the set in great form, slowly building the energy back up and relinquishing his lone stake of the spotlight for a variety of special guests including Lil Yachty, Tee Grizzley, Mereba, and EARTHGANG. Energy levels continued to build, mosh pits continued to get larger and larger, and JID, surrounded by friends, family, and every artist who’d stepped foot on the stage all night, gave us the climax we’d all been waiting for over the last 2 years: “151 Rum”.

Throughout the night, I slowly became aware of an interesting trend: a small, but discernible disconnect between the audience and performers. While the night’s performers more than matched the energy and enthusiasm of the crowd, you could sense a small sadness in them that this memorable tour was coming to an end. The bittersweet tint was easy to miss amidst the rowdy atmosphere that Atlanta hip-hop shows are known for, but you could feel it in the small moments. Mereba taking an extra moment to close her eyes and breathe while she smiled at the applause. Saba sending his expressive eyes back-and-forth across the crowd for just a few extra seconds at every pause. JID lingering in every little moment of crowd interaction, smiling at friends from grade school school dispersed throughout the crowd and even pointing out his mother watching from the back. You could see it in their eyes, all of their eyes – this show was an emotional end to a tour they’d remember forever. 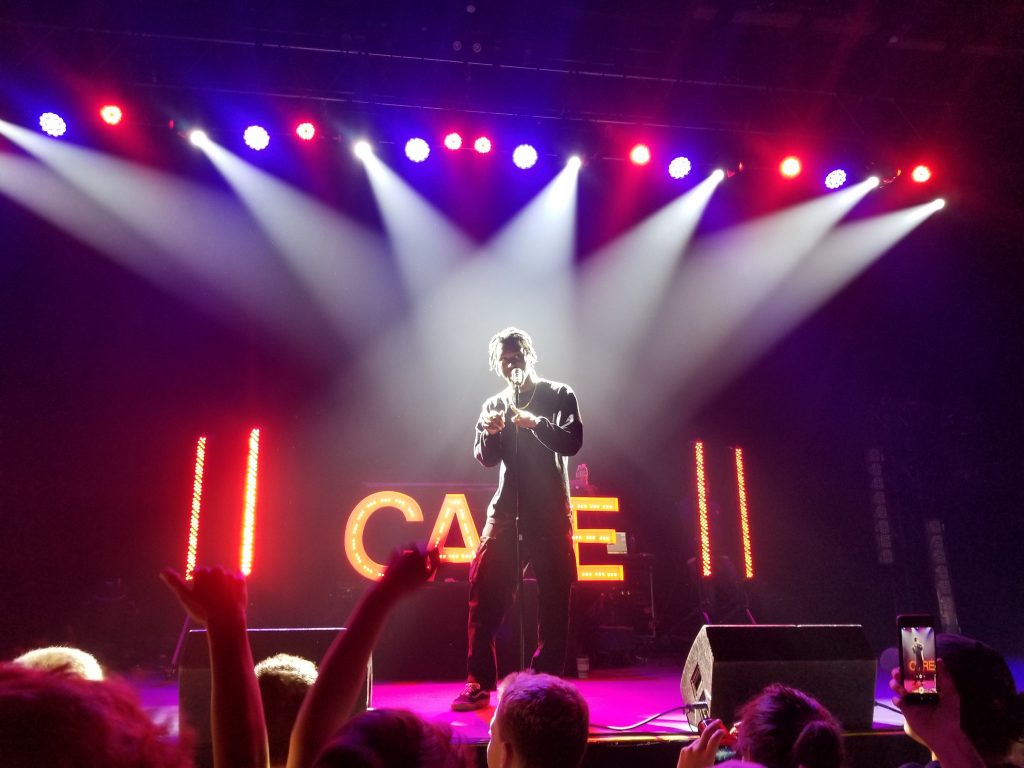 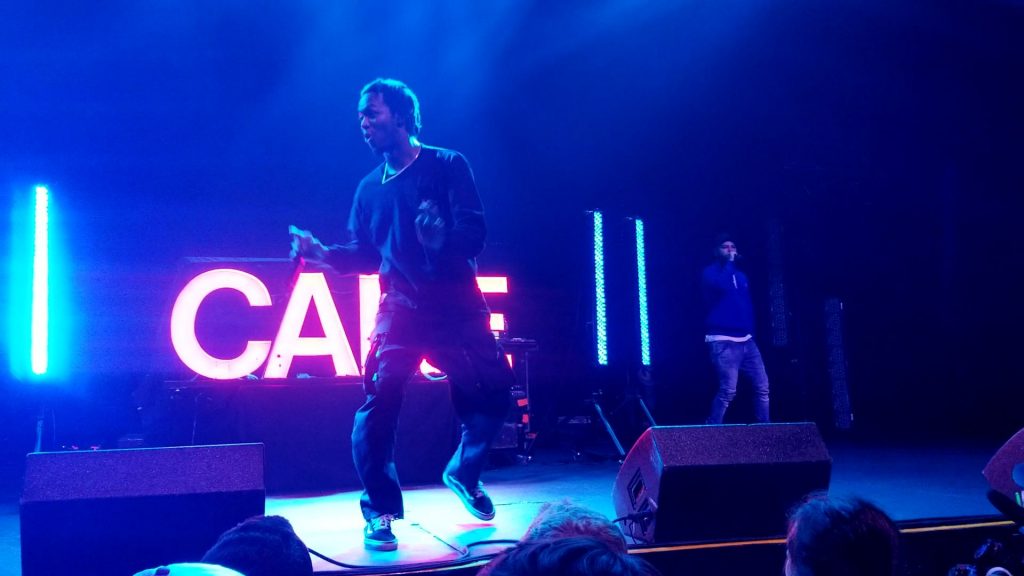 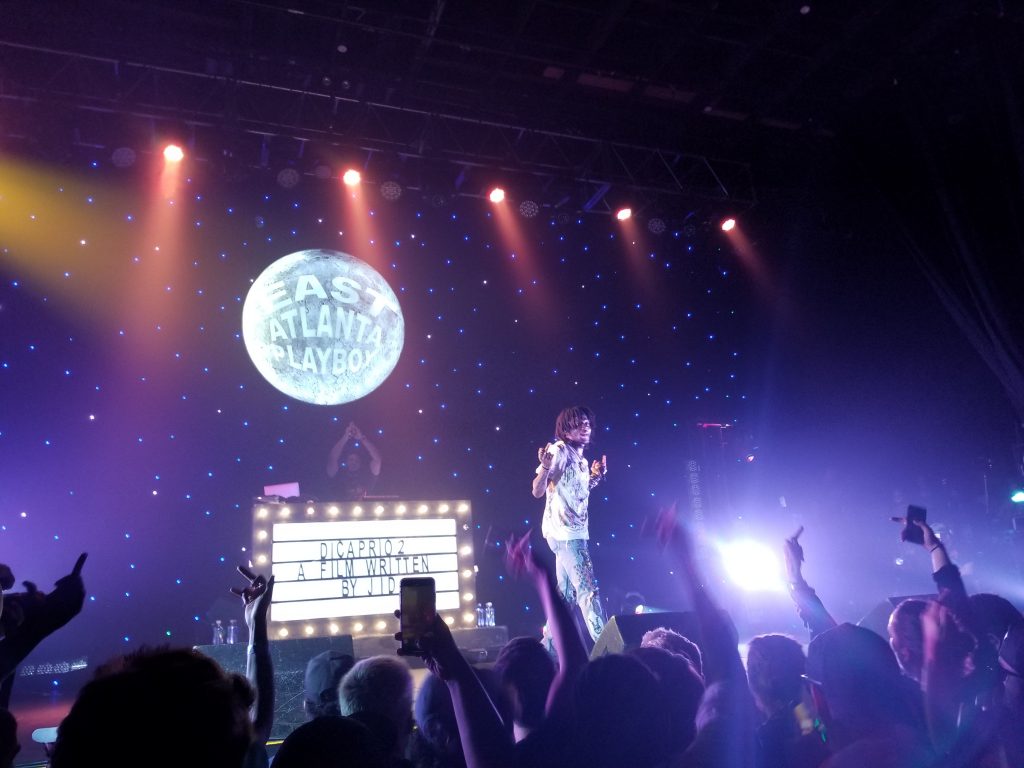 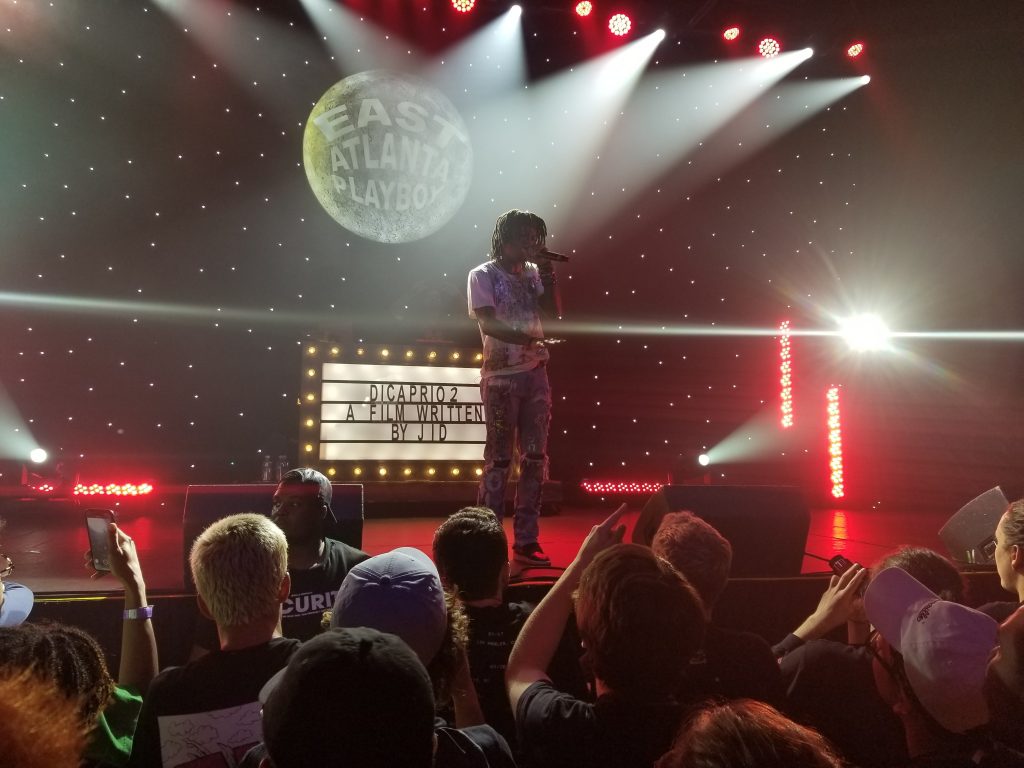 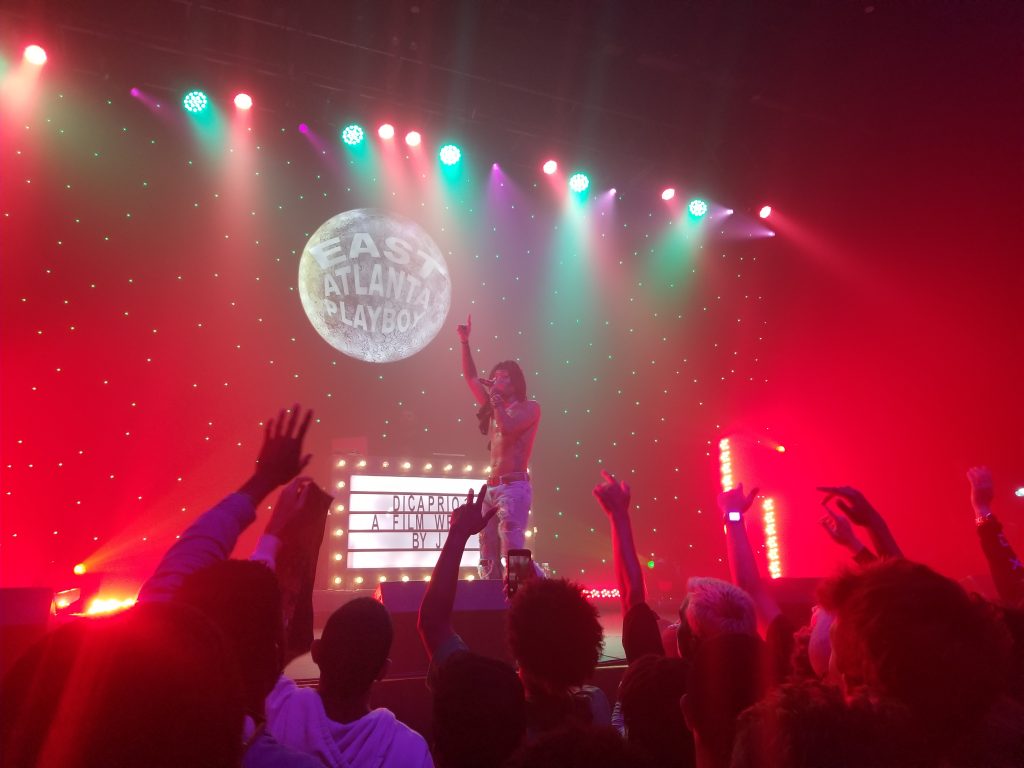 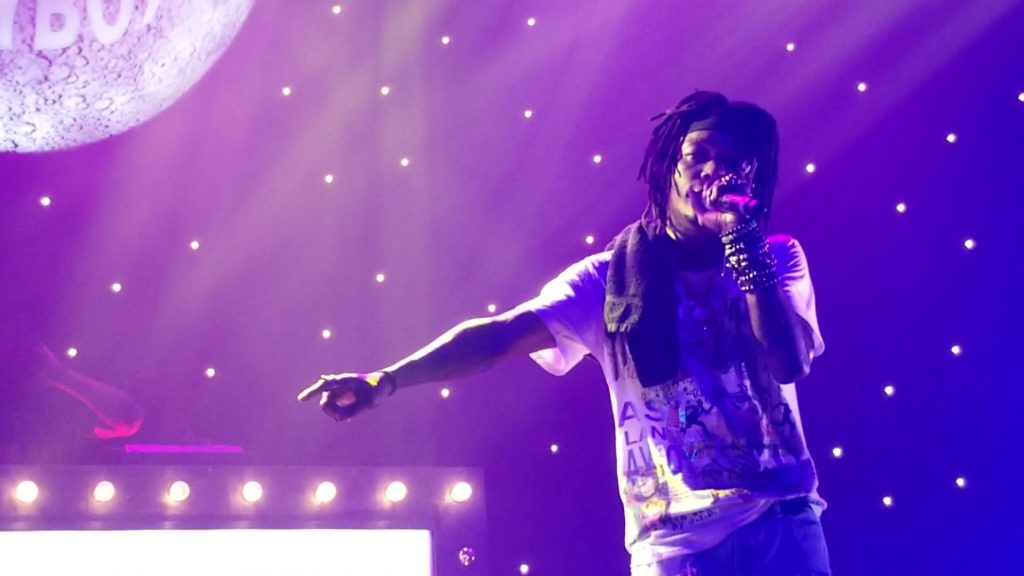