Kanye West’s first two albums cemented him at the top of hip hop as both a rapper and producer – but Yeezy set his sights even higher with Graduation. Fueled by Graduation’s wildly successful singles and international reach, Kanye quickly ascended to the throne of hip hop’s first legitimate Global Rockstar.

In this third installment of the Yeezy Season series, we use the data from Kanye’s creative output leading up to his third album Graduation to trace the moment Kanye West went from mainstream rapper to fully-fledged rockstar. 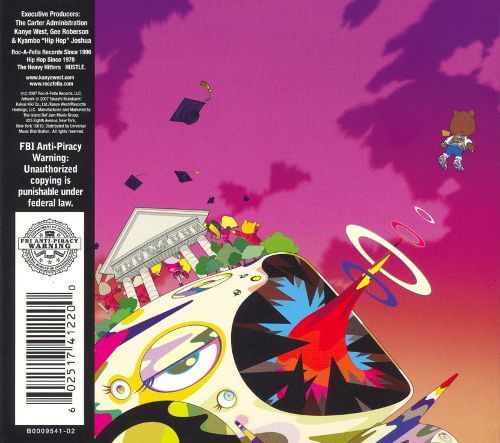 50 Cent deserves his money back. When he and Kanye had their 2007 sales battle, 50 seemed to be under the impression he was going up against a peer. In truth, Kanye West was no longer just a producer or just a rapper. Kanye used The College Dropout to launch himself as a rapper, Late Registration to become the most vital voice in hip-hop production, and then Graduation to transcend any label applied to him by touching the stratosphere of pop culture. Yeezy was quickly becoming a near-deity in a space entirely separate from the realm 50 Cent still felt he could dominate.

Rockstars not only put numbers on the board, they swagger: staggering from one extreme to the next, chasing peaks and crescendos with no concern for rules or structure. Kanye attacked Graduation with a pop-infused vigour and a maximal sound that relied on his sturdy base of sample-based production, but built a stratospheric soundscape on top.

But these are all qualitative arguments: let’s get into the data.

“Stronger” and “Can’t Tell Me Nothing” were released as singles before Graduation dropped. “Stronger” is certified 8x platinum, and still remains Yeezy’s most commercially successful lead single of all time.

The sample Kanye utilized for “Stronger” (“Harder, Better, Faster, Stronger” by Daft Punk) featured broad, aggressive synths and a slightly menacing atmosphere, the perfect backdrop for Ye’s off-handed boasts and cultural might. The sound was a dramatic departure from the singles that led The College Dropout (“Through The Wire”) and Late Registration (“Gold Digger”). Both those tracks featured a laid-back, permissive air allowing Kanye to rap with little risk. “Stronger”, on the other hand, is a statement record – and the fact that Kanye lifted it to number 1 on the Hot 100 (his third) when the original sampled Daft Punk track didn’t even chart, speaks volumes to Kanye’s developing rockstar status.

Graduation Charted in the Top 10 in 14 Different Countries, the Most of any Kanye Solo Album

Rockstars are globetrotters, and with Graduation Kanye reached his peak of international ubiquity with regards to music. The countries that embraced Graduation weren’t particularly diverse; the only non-European countries were Canada (number 1), Australia, (number 2) and New Zealand (number 2), yet the album signalled a worldwide embrace of Kanye West’s production beyond anything he’d experienced, before or since.

The theme of international fame (or infamy) cropped up in both Ye’s collaborations, and his lyrics. Kanye and Estelle played heavily with the image of a globetrotter on “American Boy” in 2008, and Ye spread some love to Teriyaki Boyz, a Japanese rap group, via “I Still Love H.E.R.” in January 2007.

Ye dropped some international bars too, notably on “Barry Bonds”, (“Fresh off the plane, Konnichiwa bitches / Turn around another plane, my passport on pivot”), and on “Homecoming” (“Then you wouldn’t’ve ever hit the airport to follow your dreams”).

Related Sauce:   How Kanye Made “The College Dropout” - Every Sample, Every Beat 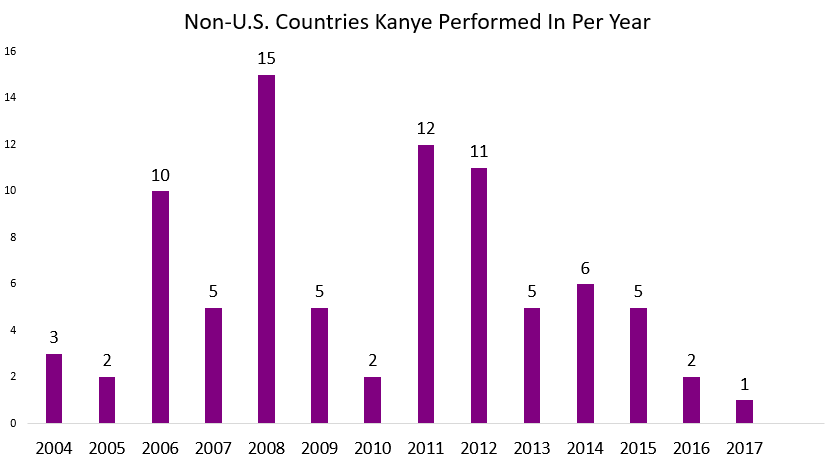 Despite Kanye continuing to ascend the pop-culture ladder post-2008, the 3 year period surrounding Graduation was his most “international” in terms of non-U.S. countries performed in. He also performed 86 shows during this 3 year stretch, the most of any 3 year period in his career (by a long way, as the next was 55 shows from 2011-2013).

Rockstar Kanye was in full effect – and he knew it:

Kanye ended his college-themed triple-album series by reaching the musical peak of his mainstream career. He sold more singles, charted in the top 10 in more countries, and played more international shows than he ever had prior, or has since. The data exists to prove Kanye became a rockstar, maybe the first true rockstar in hip-hop history, one who didn’t acquiesce to the perceived rules surrounding the label (guitars, drugs and debauchery). He maintained his “Louis Vuitton Don” persona, stayed true to the ideals of hip-hop music (socially and politically conscious, clean, fresh, unfiltered), and managed to truly transcend. 50 Cent didn’t lose; he had no opponent.