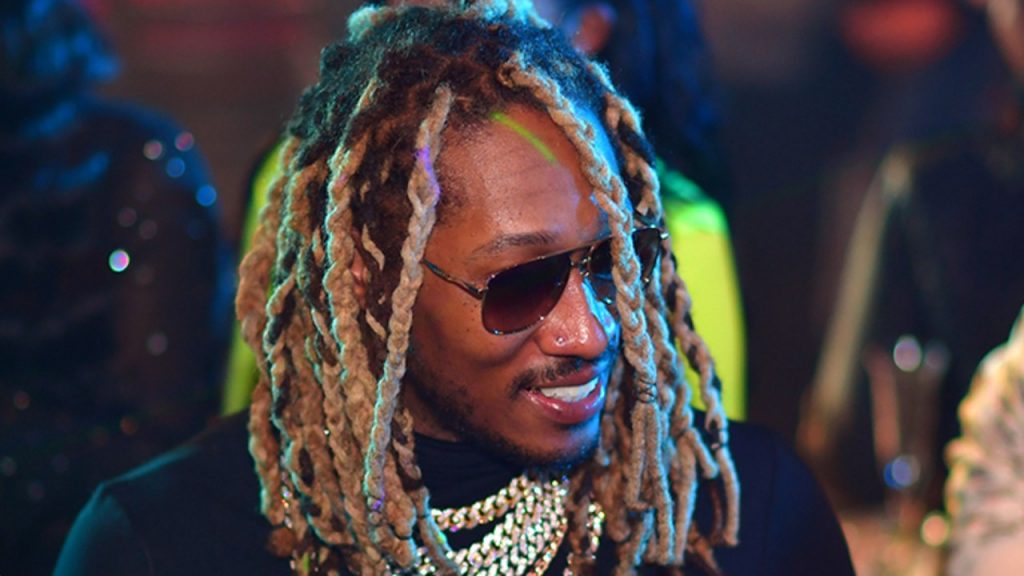 You’ve stumbled into an ongoing collaborative series between CentralSauce and HipHopNumbers, where I take a deep dive into the best tweets and statistical discoveries of the previous week. There’s a healthy helping of numbers and always a slight twist of ya girl Iggy in the mix. Enjoy!

Future raps more about Lean on #THEWIZRD than his 4 previous commercial projects, despite telling Rob Markman he quit Lean

Future just dropped new album The WIZRD, and Sony paid for an all-encompassing press run (he even, genuinely, dropped by Fader, and I won’t give them a back-link because the main takeaway from the interview was that pain can be a burden). The greatest quote came via Rob Markman and Genius, in relation to Future’s Lean consumption:

And then he quite literally didn’t stop rapping about Lean. The WIZRD features 18 explicit references to Lean (more than his previous 4 commercial projects), and none of them preach abstinence. It’s the kind of scattered denial (either he’s in denial about consuming Lean, or in denial about the effects his faux-consumption has on his fan base) you’d expect from an addict at an intervention, except Future already told Clique TV back in 2016 that he isn’t actually a drug addict, either:

I’m not like super drugged out or [a] drug addict. My music may portray a certain kind of image…I feel like that’s the number one thing [drugs] everybody likes to talk about. It’s a catch”

The statistics back Future up on the second half of that perplexing statement. The nature of drug references in hip-hop as a whole has shifted dramatically in the last 30 years, from seller to abuser. Notable is this chart, from the Genius RapStats engine, tracking the popularity of Xanax in hip-hop lyrics since the 1980s: 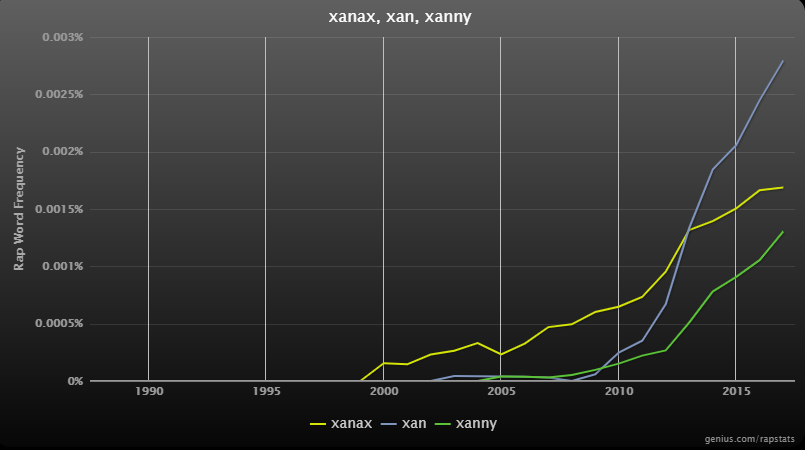 Similar trends exist for Percocet, Ecstasy and many other prescription meds. Looking at how often Future references drugs, and the timeline and success of his career, it could certainly be argued it was Future himself who greatly helped create this trend he now feels trapped by:

Thread: How Often Does Future Rap About Drugs? Pre The WZRD

% of Bars Devoted to Drugs on Future’s Commercial Projects

Regardless of Future’s motives and the consequences of them, Future continues to rap heavily about Lean. And his album will likely be consumed just as voraciously as Future’s fantastical substance indulgence.

Thread: How Often Does Future Rap About Drugs? Pre The WZRD

% of Bars Devoted to Drugs on Future’s Commercial Projects

As the mentions on this tweet thread repeatedly told me, listeners do not go to Drake for social or political insight. Whether that’s because he has only devoted 39 bars to social and political issues in his entire solo commercial career (0.6%), or because people who listen to pop music are uninterested in politics and the wellbeing of their fellow humans, is unclear from the data. All that can be gleaned is Drake avoids the topic.

He mentions Obama and the ATF on Thank Me Later, Government housing on Nothing Was The Same, and references to racism are scattered across his albums, but he certainly hasn’t followed the example of the only other rapper whose run could remotely be compared to Drake’s: Eminem.

Top-tier rappers need not speak on politics, but most of them do, especially Kendrick, Cole, Eminem and Jay-Z

Whilst Em’s political and social dives have been criticised as heavy-handed at times (Joe Budden called 2017’s “Untouchable” ‘trash’), Em was on the front line during the early 2000s when George W. Bush was in charge of the country. Few would even consider comparing Bush to America’s current President, Donald Trump, on any level. Trump has taken America to a dark place, and whilst other rappers are using their platform to speak out as much as possible (The Game, Waka Flocka, Rick Ross, YG, Macklemore, G-Eazy, Anderson .Paak, T.I., A$AP Ferg, will.i.am, Common, ATCQ, Joey Bada$$, Jay-Z, Wale, Kendrick Lamar, J. Cole, Janelle Monae, Jaden Smith…), Drake isn’t at all on wax.

Drake calling Donald Trump a “Fucking idiot” isn’t particularly groundbreaking. The closest he gets to calling Trump out on wax is actually by putting Jay-Z on “Talk Up” off Scorpion, in which Jay raps “I got your President tweetin’, I won’t even meet with him”. It’s true that Drake is Canadian, but he’ll tell you on most tracks he lives in Calabasas, which is in Los Angeles, which is in California, which is in the United States. His unsurprising silence is pop-star 101: Taylor Swift’s closely controlled narrative has only allowed one tiny political leaning in her entire career.

What does Drake even rap about anyway? Stay tuned for that.

A production credit on every track on Miss E & Under Construction, her 2 highest selling albums

288 writing and production credits total, 151 of those on tracks she didn’t rap on pic.twitter.com/APMsDImEH4

Hip-Hop is finally getting songwriting recognition, and Missy Elliott is now the first female rapper to ever be inducted into the Songwriters Hall of Fame. It is well overdue – Missy has been penning music since as far back as 1993, and the above tweet shows she was not only instrumental in her own career, but her songwriting credits stretch across the landscape of 90s and 2000s hip-hop. Aaliyah’s incredible and iconic sophomore album One In A Million features 9 Missy credits, and she’s worked with Jodeci, Busta Rhymes, Ginuwine, Mariah Carey, Whitney Houston, Destiny’s Child, *NSYNC, Beyoncé… Shall I continue? Ciara, 213, Mya, Jennifer Hudson, Fifth Harmony…

Missy has been in her songwriting bag for 25 years now. And she has achieved incredible success simply as a rapper. She is currently fourth on the all-time list of highest selling female rappers, behind:

Related Sauce:   How Curren$y Rose as the King of New Orleans, In His Own Words

Missy sits fourth with 20,000,000 in single and albums sales, and it’s likely she will sneak past Iggy Azalea in the near future as hype and expectation build for her next solo project. The takeaway from all this? Missy is a musician, and she deserves as much credit as possible for not only transitioning female rap from 1990s, where female rappers were seen as side-kicks or part of a crew with a popular rapper writing for them (Jay-Z with Amil, Notorious B.I.G. with Lil’ Kim etc), to the 2000s and now 2010s, where female rappers stand on their own.

Mac Miller and XXXTENTACION Share in a Historical Achievement

Both artists tragically lost their lives in 2018

The truly tragic passing of Mac Miller was commemorated on his birthday (he would have been 27) on the 19th of January. I have to speak on Mac for a short second. His passing is still as raw today as it was when I heard of it, and in a world where every celebrity death is reported on by hundreds of different outlets, it’s easy for a passing to get lost in the wash. But Mac Miller was a kind, beautiful soul, and his music was genuine, raw, honest, and extremely powerful and insightful for someone so young. His death will be tragic to me, likely for as long as I have emotion in my body.

He also joined another deep soul on that list, xxxtentacion. His death was totally senseless, and a jolting reminder that humans are cruel, perplexing creatures who, at their core, will almost always have self-interest as their most basic value.

Xxxtentacion made music that spoke to the darkest recesses of the human mind. Violence, power struggles, unceasing guilt brought on by horrific actions perpetrated by oneself. Connecting with his music is scary in itself; sharing that black ocean with someone whose personal life is allegedly littered with horrible acts that he committed is very challenging. I’ve never committed such atrocities, but I’ve been to the corners of the mind that xxxtentacion speaks so bluntly on, and they’re about as unpleasant as you probably imagine they are. I’d suggest that’s why not too many artists like xxx have ever existed; humans are not predisposed to walk that path unless they’re forced to, either by their own broken hand, or by some unseen and possibly unknown force.

Mac Miller’s first album was not of this ilk at all, but it was nonetheless a monumental achievement. Blue Slide Park dropped in 2011, independently, and became the first independent No. 1 album of the decade, and the first to go No. 1 whilst being independently distributed since Dogg Food by Tha Dogg Pound in 1995. The album propelled Mac into the stratosphere, and allowed him to dynamically change his sound and content whilst still maintaining major label backing and commercial success.

Xxxtentacion’s Skins was a little different. It’s his 3rd record, his second to be released independently (2017’s 17 dropped on Bad Vibes Forever and EMPIRE, and 2018’s ? came out on Capitol). It hit No. 1 in the latter part of 2018, and became just the second truly independent album by a hip-hop artist to top the chart this decade.

RIP to both of these artists.

If you enjoyed the statistical angle in this content feel personally victimized by this data, come chat shit to me over at HipHopNumbers on Twitter.