CentralSauce » Why We Like It: Frak’s “Rick Moranis” Ft. OFLO

Frak sent his new single and visual to our official CentralSauce SubmitHub page. This is Frak’s second single off his upcoming album B-List Celebrities, a project releasing in conjunction with Bay legend Zion I’s imprint, and Empire. “Rick Moranis,” featuring up-and-coming Bay songstress OFLO, is produced by Will Randolph V. The music video we are premiering here on CentralSauce, was shot by Zoodeville.

Frak’s wit is one of his most glaring qualities. He repeatedly proves how clever he is from the title, to the theme, to every single bar that supports it. The song is about ghosting in it’s classic trajectory. You get to know someone and feel a connection. Then you are texting frequently, and maybe you even hook up, but you are for sure very interested. Until, suddenly out of seemingly nowhere your hopeful match for a full time lover stops responding to you. They vanquish into thin air, like a ghost, only to have the potential of your future with them haunt you.

The title “Rick Moranis” is the real name of the actor who played Louis Tully in the 1984 classic film Ghostbusters. Tully in the film is possessed by a ghost. The title references the overbearing effect ghosting has had on Frak. In the quote above from the first verse, using H-town car imagery for a parallel and set-up, Frak aptly links his ghoster to the possession of his pen.

In the first full verse Frak describes the feeling of being ghosted. He raps, “If I got ghosted alone in the woods would no one know, fallin’ through the cracks because I couldn’t crack her moral code.” Frak takes on the self-involved loneliness that comes with ghosting. The first of the two lines is somewhat humorous, as it references the sort of cheesy “woe is me” emotion we have all felt if we have been ghosted. Then he comes right back in the following line with analysis of the more sad feeling of being ghosted. It lessens your feelings of self-worth, as it seems the other person didn’t think it was morally worth it to tell you they were no longer interested.

Related Sauce:   Why We Like It: Casper Jones’ “Ghost Town”

The second verse flips and advances the topic by tackling Frak moving from the person ghosted to the ghoster himself. He raps, “I was a friendly ghost now I’m Casper to friendzonin’ / I pass in a headstone resurrected and kept floatin’.” In order to regain his own self-confidence Frak turns into the very thing that hurt him. In an attempt to conquer his hurt he has now fully become possessed and turned into a ghost himself.

After the second verse there is a short bridge section where the drums drop out and Frak, in sync with songstress OFLO, sings, “Why I had to ghost on em / ride off in the night like I was the four horsemen / stoned and alone in my own orbit / now I’m writing this hook post mortem.” Quite the reflective ghost. He wishes he wasn’t here on the other side with all the other ghosts who keep ghosting and hurting potential lovers. But he has come to accept that his pre-ghosting self is dead.

The thing that truly levels the song up sonically though is the hook just described in the bridge. There are three iterations and even as you dissect the verses you crave returning to it. It starts with a beautifully and ethereally sung section by OFLO that draws you in like a moth to a flame. Then transitions into a section with a layered vocal of Frak and OFLO rap-singing in a car trunk speaker, California low rider rhythm. Frak raps, “Anytime you lonely is the only time you call me now / fucked around and turned my phone into a haunted house.” This whole vibe is accompanied by pitched down chopped and screwed styled background vocals to complete composition.

The newly released music video accompanying the single only adds to the songs already enticing energy. The visual is hazy and smoke filled. The three aesthetics and backgrounds are a graffiti filled concrete house structure, the woods, and a whip ridin’ slow with the windows down. Frak’s most noticeable quality is his confidence in his point of view. His fusion of styles seems to come naturally from who he is, and is accentuated no better than in this bar, “Congratulations bitch I’m Ghost Malone!” 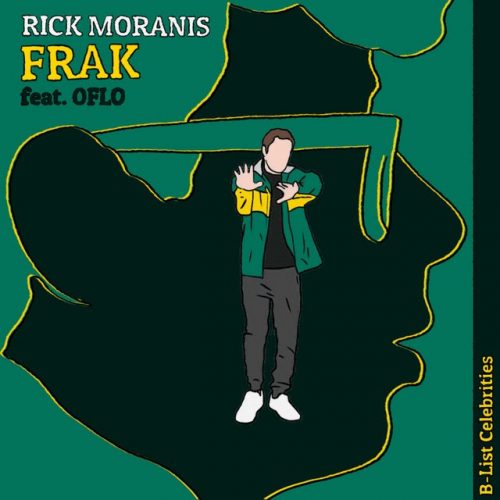 I think ghosting is cyclical in the same way it is cultural. As our communication style is more and more influenced by our technology, the responsibility of being upfront and honest with your emotions becomes less and less mandated. So when someone gets hurt or ghosted, we ourselves continue the cycle. I know I’m guilty of it.” – Frak for CentralSauce (2020)