If You Liked “Flower Boy”… [Playlist]

Tyler, the Creator took a step outside his comfort zone with his fourth studio album and the results were phenomenal. If Flower Boy left you fiending for more, we’ve got the perfect playlist to satisfy your indie-hop addiction.

Tyler, the Creator outdid himself on Flower Boy. The album, which took a colossal diversion from his highly experimental / controversial project Cherry Bomb, surprised long-time stans and casual listeners alike (although the vinyl itself was distinctively and classically Tyler). Filled with beautiful chords, whimsical melodies, introspective vocals, and addictively beautiful bridges, Flower Boy left many wondering where this side of Tyler had been all along. 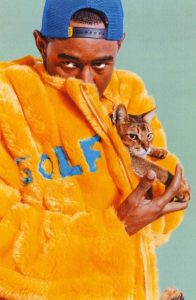 Keeping in-line with his past projects, Flower Boy was produced in its entirety by Tyler himself – which is what makes the album, and its abrupt diversion from Tyler’s old music, so fascinating.

Speaking with Jerrod Carmichael in “Flower Boy: A Conversation”, Tyler revealed that pop-god Pharrell was one of his biggest inspirations for the album as he worked to infuse Flower Boy with so many beautiful chords and melodies that it sounded “like a Disney score.”

If Disney was lucky enough to nail down an album like Flower Boy as the soundtrack to one of their films, I’d watch that movie non-stop. Even if the movie was literally just two hours of static beige screen, it wouldn’t leave my TV for weeks.

If you feel the same way, then I’ve got the perfect playlist for you.

Without a doubt, Flower Boy leaves a distinct flavor in a listener’s ears. Despite that, the album also covers a helluva lot of musical bases. Even just within the three song sequence of “Boredom”, “I Ain’t Got Time!”, and “911 / Mr. Lonely”, the album blends so many themes and genres that it becomes difficult to define.

That being said, we went through hours upon hours of music to recreate and extend Flower Boy’s distinctive audio flavor – and here’s the result: featuring equally smooth and vibey artists like GoldLink, Rejjie Snow, Brockhampton, and Saba/Pivot Gang. If you liked Flower Boy, then you’ll love this shit.

If you loved the album enough to be here right now, you need to take some time out of your day to watch his interview with Jerrod Carmichael. Tyler takes you inside his head and thought process on a song-by-song basis and reveals plenty of cool nuggets along the way, like the fact that “I Ain’t Got Time!” was recorded in Kanye’s studios as Tyler worked with him during The Life of Pablo sessions. Pretty dope.