Less than nine months before the release of their new album, Flatbush Zombies gave a live sneak peek of some unreleased music at a show overseas. Judging from the two bangers, “Vacation in Hell” is set to be an instant classic. (This show is fucking nuts – you have been warned)

The Zombies from Flatbush

Three childhood friends from Flatbush, Brooklyn who make up one of the best (and some would say best) group in rap, hands down. After getting together in 2010, the trio proceeded to drop two critically acclaimed mixtapes within a series of years and gathered a cult following with their legendary live performances. Driven by Erick’s unique, grungy approach to production, layers of brilliant wordplay, and flows that are as aggressive as they are technically proficient, Flatbush Zombies are the brightest star shining out of New York’s reborn modern rap scene.

Flatbush Zombies have a reputation for rowdy shows, to put it lightly. 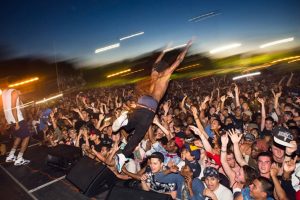 Their bars are spot-on and their on-stage chemistry is something special. You’re just as likely to find these guys going acapella off each other as you are to find them moshing with the crowd or diving head first into the crowd (they do both in this video). Anyone who’s been to a show will tell you with all the conviction they can muster that these three artists are some of best live performers around today, even outside of hip hop.

Since the group’s creation, Flatbush Zombies have brought their grunge rap to light up some of the biggest stages in music including Coachella, SXSW, Rolling Loud, and London’s Wireless Festival. If you didn’t get tickets, don’t worry – we’ve got the next best thing for you.

Zombie Insanity in the Netherlands

Woo Hah festival is the world’s premier hip hop festival outside of the United States. The Dutch festival has hosted huge acts including Travis Scott, Gucci Mane, Lil Uzi Vert, Nas, Rae Sremmurd, Future, and Young Thug just over the last three years. Despite the star-studded cast, Flatbush Zombies’ 2017 set is regarded as one of the most unforgettable performances ever in the festival’s history. The three maniacal rap geniuses are known for their live shows, but they conjured up something special for this set.

Highlights from the set:

If you’re one of the unfortunate souls who haven’t seen Flatbush Zombies yet, I have great news. For the first time in years Flatbush Zombies are taking to the road this Summer for their “See You in Hell” tour in support of their newly announced album, Vacation in Hell.

After the unmistakable talent shown on their first two mixtapes, Flatbush Zombies’ first album 3001: A Laced Odyssey was widely regarded as a disappointment by fans and critics alike. Vacation in Hell is the dynamic trio’s chance to redeem themselves and rediscover the sound that made them cult heroes. It’s very likely that the two unreleased songs from Flatbush Zombies’ Woo Hah set will be included on Vacation in Hell.

Judging by their newly released flaming single from the album, “Headstone”, it sounds like they’re intent on making it stick:

With other star-bound new-comers from the East Coast like JID and EARTHGANG also on the rise, it looks like the East Coast is gonna be feasting on new talent this year.