Here’s Every Interview EARTHGANG Has Ever Done

EARTHGANG is the most interesting thing to happen to Southern Hip Hop in more than a decade. We gathered and analyzed every interview the duo has ever given, starting all the way back in 2011 up through the release date of their new EP, Royalty in February 2018.

Here’s every interview EARTHGANG has ever given, along with the date, topics covered, and best quote for each – all in chronological order. Enjoy!

Date: January 31, 2011
Topics: Behind the name and early origins
Top Quote:  “In the past, you knew when an artist was from [Atlanta]. T.I., Bo Hagon, OutKast, TLC. Now they barely have an identity, just a “sound” that represents Atlanta. The world needs to know that Atlanta is more than a sound.” – Johnny Venus

Date: August 17, 2013
Topics: Shallow Graves For Toys, Musical Influences, Spillage Village, Future Collaborations
Top Quote:  “If everyone CAN collab with everybody, then that means nobody is doing something different enough. It shouldn’t be that easy for all of us to just keep collabing.” – Doctor Dot

EARTHGANG’s Interview with All Hip Hop

Date: April 1, 2014
Topics: origins behind the name, the creative process for Shallow Graves for Toys, Atlanta’s personality as a city
Top Quote: “The industry is changing and shifting. Labels no longer have exclusive access to models of business and revenue streams. But power never yields without struggle and fellow artists making strides i.e. Chance The Rapper, Joey Bada$$ [#BGA], Action Bronson [#BGA], Kid Cudi understand the leverage they have.” – Johnny Venus


Related Sauce:   Sounds That Kept Us Sane: The Albums That Got CentralSauce Through 2020

Date: July 29, 2014
Topics: Performing in their days at Hampton University, Dungeon Family/Outkast comparisons, top artists they want to collab with in the future
Top Quote: “Comparisons are the comfort zone of intelligence. Folks have this tendency for nostalgia-based love, as it makes them latch on to something easily. We appreciate that we can be put in the same light as OutKast, but they are their own entity. They have been doing this for over 20 years now and I find it unfair for younger cats like us or in general to be ranked in that esteem without having a chance to establish their own name.” – Johnny Venus 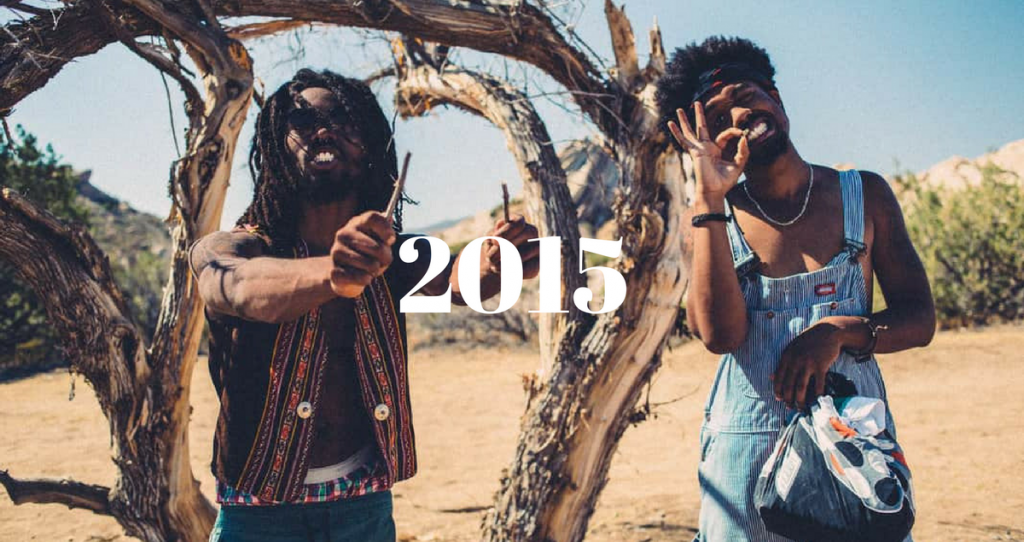 Date: March 15, 2015
Topics: Touring with Ab-Soul, working in the studio with Mac Miller and OG Maco, where their sound fits into the Atlanta hip hop scene
Top Quote: “Our sound is reflective of where we grew up. It’s reflective of the neighborhood in southwest Atlanta where we’re from.” – Johnny Venus

Date: March 19, 2015
Topics: Origins, producing their own stuff early on, odd jobs worked early in their career, experiences from Ab-Soul’s 2014 tour, Dungeon Family, literature, and Young Thug
Top Quote: “I played all brass in high school. I played all the horns on Shallow Graves for Toys. We produced all that stuff.” – Doctor Dot

Date: April 10, 2015
Topics: their creative process and inspirations, Atlanta roots & childhood, the concept behind their mixtape Torba, growing as artists
Top Quote: “Everyone walks around with different masks on. They have different areas of their lives that they hide… We don’t just put our whole lives out there, but what we decide to put out, and being vulnerable, it connects with other people. People who might come from different backgrounds, we still go through the same life experiences. The more vulnerable that you put yourself out there, the more people you connect with. If you try to hold it in, you’re shutting yourself off from humanity. Everybody goes through the same things. We’re all on this earth, every day we go through trials and tribulations.” – Johnny Venus

EARTHGANG and JID Interview with PATisDOPE

Date: July 1, 2015
Topics: Spillage Village, the rise of Future, the role Atlanta plays in their music,
Top Quote: “It’s hard for n****s to sit in the mirror and look at themself and see what’s going on and be real assertive and serious with themselves… so we want to bring that shit with all the good and all the bad, all the influences, and all the feelings.” – Johnny Venus

PATisDOPE "One On One" Interview with EarthGang

Date: October 29, 2015
Topics: Origins, roles in the studio, jobs before music, career highlights
Top Quote: “You gotta look at this shit like paintings. You can’t look at music as what it does on paper, by the numbers – if Michelangelo thought about shit like that you wouldn’t have the Sistine Chapel or David.”  – Doctor Dot

Date: November 5, 2015
Topics: their ‘why’ and the writing process, early musical influences, the inspirations for Shallow Graves for Toys, wildest things they’ve smoked out of
Top Quote: “I was so into TIP at one point when i was in like 7th or 8th grade, I cut my hair like that n****… I had the exact fade that TIP had and i was one of those thousands of nigga that used to walk around looking like him then”  – Doctor Dot

Date: November 6th, 2015
Topics: Origins of the name, greatest influences, Strays with Rabies
Top Quote: “It’s all about freedom at the end of the day. All I ever say in every record is about embracing as much freedom as you can because it’s some people who don’t get to experience the type of freedom that others get to. Whatever you do in this life, embrace your freedom and be true to yourself.” – Doctor Dot

EARTHGANG’s Interview with The Answer

Date: December 3, 2015
Topics: Drug use, groupies, their favorite artists
Top Quote: “[We named it Strays with Rabies] because we are two strays. And we spit, and we foam at the mouth, and we bite bitches.” 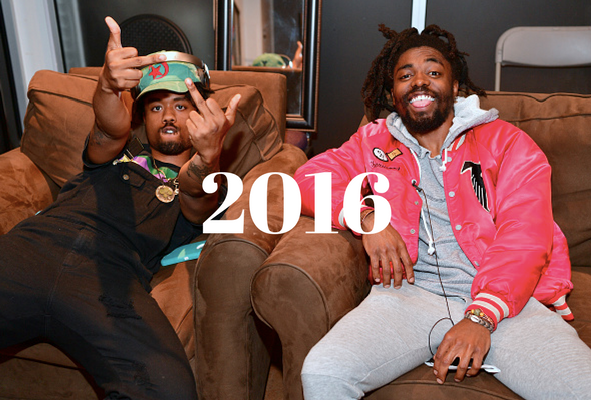 Date: June 13, 2016
Topics: Strays with Rabies and their creative process
Top Quote: ”Even though we are from Atlanta, we really toured over the country building our fan bases just doing what we do. And not just us, but our fans they move. They’re from here, then we meet people from all over the place. But it all…we all have that. We all bring those references with us and we bring what we take with us. We all influence each other through experiences. “ – Johnny Venus

Date: July 14, 2016
Topics: Influences, the “Atlanta sound”, and touring with Bas & Dreamville
Top Quote: “Our sound is a lot like watching a full moon at night on the beach, and then all of a sudden, a sea monster comes out of the water to battle this other giant sea monster that also just now came out of the water. My influences are the people who mastered the skill of “people-moving”—the people who I think have journeyed to achieve their most pure self, being exactly who they are, with conviction. People usually love them or hate them for it, but they have lasting effects on society.” – Johnny Venus 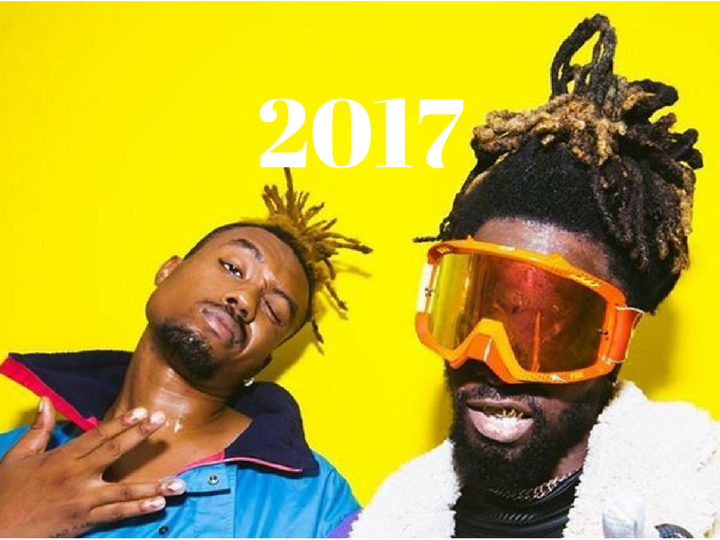 Date: February 22, 2017
Topics: Atlanta gentrification, Atlanta’s underground rap scene, their experiences making music at Hampton University
Top Quote: “I learned more about my life and myself in high school than any other time in my life… All our teachers were black, a lot of our teachers was with the Nation, we had a few that were ex [black] panthers… It was in a historically black part of the city, not far from where a lot of important Civil Rights shit went down.” – Doctor Dot

Date: April 17, 2017
Topics: the making of the music video for “Liquor Store” and the inspiration for the video
Top Quote: “In the neighborhoods, liquor stores are like Mecca – there are a lot of cultural things going on. You get certain people, certain personalities, certain people from different backgrounds, is coming in and out all the time… People coming to the same place to try to relieve themselves of the woes of the world.” – Johnny Venus

Date: Aug 10, 2017
Topics: the EP trilogy of Rags, Robots, & Royalty, touring with Ab-Soul, family, and plans for Mirrorland
Top Quote: “My mom wanted me to do this my whole life, she hype. My mom used to put me in talent shows and make me rap in elementary school. She love this shit. So bought an EarthGang shirt as soon as we made this shit. She can’t wait to be a rap mom.” – Doctor Dot

Date: September 2, 2017
Topics: Labels and their relationship with J. Cole
Top Quote: “The benefits of having people like Zeke, Barry and Cole in your corner was…it’s kind’ve just like muscle. You need that. When you’re first coming in, especially when you have an idea and things on your mind that you want to accomplish. We’ve been doing this for 10 years and we met Zeke, Barry and Cole five years ago. We understand that you can’t do everything by yourself. you can’t become a billionaire, a millionaire by yourself. It doesn’t happen that way. We learned it’s OK to trust people with your ideas and let’s all come together and share our thoughts. It’s just a beautiful thing.” – Johnny Venus

Date: September 20, 2017
Topics: How they met, their first ever project, the making of Shallow Graves for Toys, touring with Ab-Soul and Mac Miller, Outkast comparisons, Spillage Village’s origins and first show
Top Quote: “In college, that’s all that I thought about. That was it. I just wanted to get into the fucking studio. I want to write. I wanted to make something right now. And you take that on to the professional stages, so it’s like you pushing and pushing through to where we at the point where it’s the same thing. It’s the same exact thing.” – Johnny Venus

EARTHGANG and JID Interview on 96.7 The Beat ATL

Date: December 5, 2017
Topics: the collective creative process for Spillage Village, their first solo tour, their influences and inspirations, and what their goals are as artists
Top Quote: “[Our goal is to] mould the minds of the youth, the future… Get people to look forward, and to think outside the box on how we can unify.” – Johnny Venus 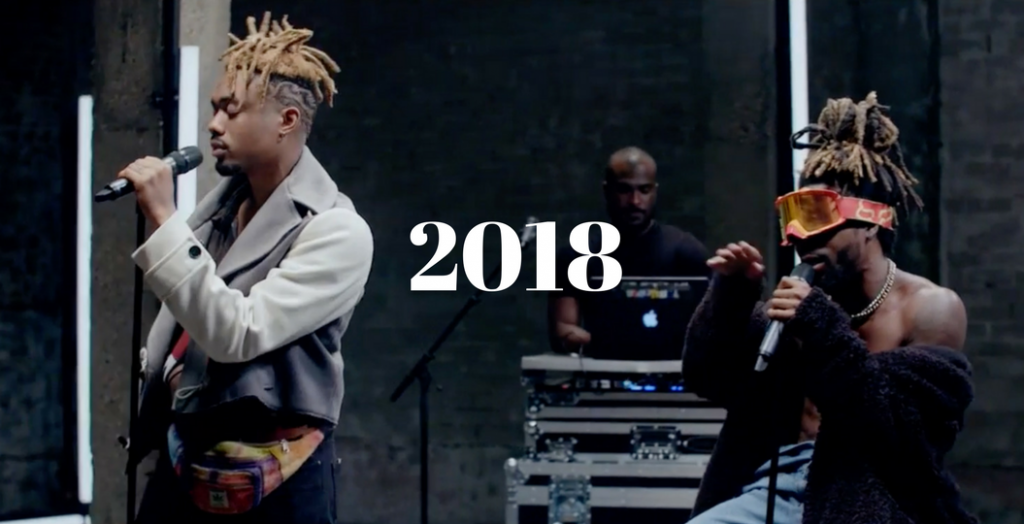 Date: February 1st, 2018
Topics: Rags, the making of “Meditate” and its music video
Top Quote: “People always ask us where we record at, and I be like: bro, wherever we are.” – Johnny Venus

EARTHGANG’s Interview with Ones To Watch

Date: February 9, 2018
Topics: the “Never Had Sh!t Tour”, Royalty, their writing process, Mirrorland,
Top Quote: “Every conversation is potential material. Everything you see when you open your eyes is potential material. That’s why you’ve got to write stuff down. I don’t know how everybody’s brain works and I don’t know how some people’s memory does this or that and not even just memory – sometimes people just don’t care about what they’re thinking about, but I like to analyze myself. Even whether I remember or not – it’s a constant. It’s such an organic process. Every conversation and every observation goes into the writing process, so it’s happening when we talking right now.” – Doctor Dot