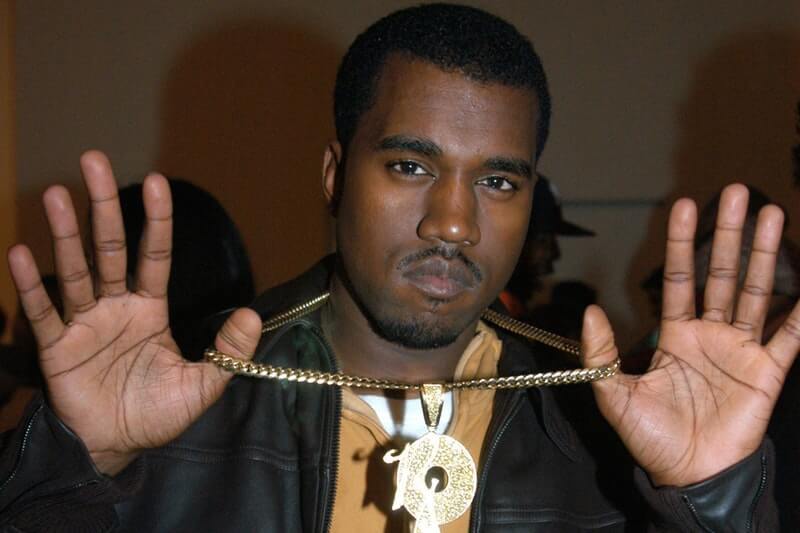 The College Dropout was an era for Yeezy unlike any other. At the time, Kanye West was a relatively unknown kid from Chicago known for his strange production tastes. Kanye was hungry and eager to make his mark with his first studio album.

“I miss the old Kanye, chop up the soul Kanye…”

With Yeezy Season 8 in full effect, Ben “Data Daddy” Carter is taking a closer look at the rollout for every single one of Kanye’s albums thus far. Each era had its own characteristics and promotional strategies that evolved as Kanye himself did. In this first installment, the data tells us a fascinating story of Kanye’s struggle to be taken seriously as a rapper until The College Dropout’s release.

You can find the rest of the Yeezus Season Series here.

More than 14 years have passed since Kanye West single-handedly beat down the door to mainstream rap and launched himself as an essential voice in a market saturated with gangster bravado and drug-dealing drama. 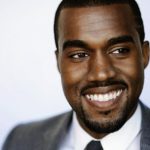 The College Dropout is now a classic album, and stories of Kanye being laughed out of high-profile studios for rapping and label executives doubting his vision are so far in the past they’ve become cartoonish, caricatures that merely add to the legend of Ye’s ascension.

Yet Kanye documented the situation on “Last Call”, the spoken-word outro that laid bare his frustration at being embraced as a producer yet rejected as a rapper, unable to fully realise his artistic potential.

So which is true? Are the stories exaggerated? Or did Kanye really have to overcome heavy inertia to have The College Dropout taken seriously?

The answer lies in the data, which we’ve gathered in full from the period leading up to the release of The College Dropout. 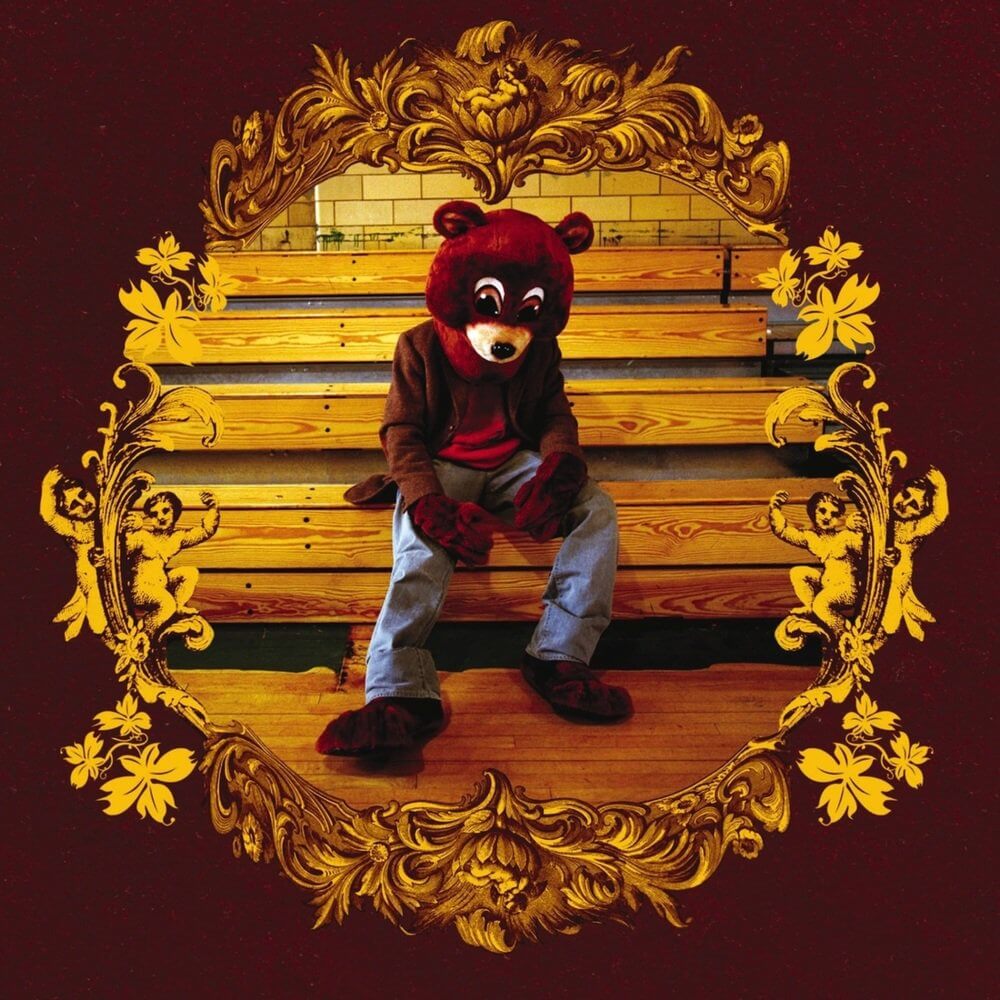 Kanye scored just 7 guest spots prior to his debut album dropping, the least (by a long margin) of any of his album promo cycles. 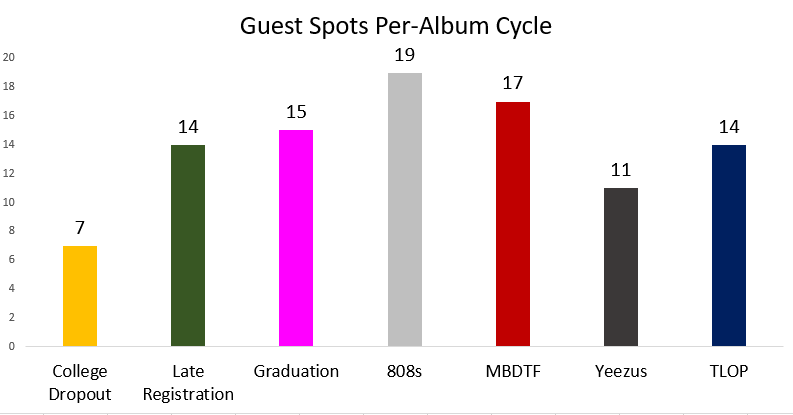 Two of these spots came via Jay-Z, though Ye’s crowning achievement as a guest rapper in this period was Talib Kweli’s “Get By” remix, on which he managed to spit a verse on-par with a glittering cast of lyrical legends that included Talib, Mos Def, Busta Rhymes, and Jay-Z. Kanye still had to fight for this opportunity, pestering Kweli until he acquiesced.

Yet Kanye’s opportunities to distinguish himself as a unique and valuable mainstream rapper prior to his debut album were clearly limited, and the comments by Dame Dash (his label head), predicting The College Dropout would need salvaging by placing Cam’Ron on every track, shows a lack of belief in Kanye’s ability to craft marketable music.

That attitude is reflected in the numbers. Here is a comparison between Kanye West’s guest spots prior to his debut album, and other Roc-A-Fella signees and their debuts. 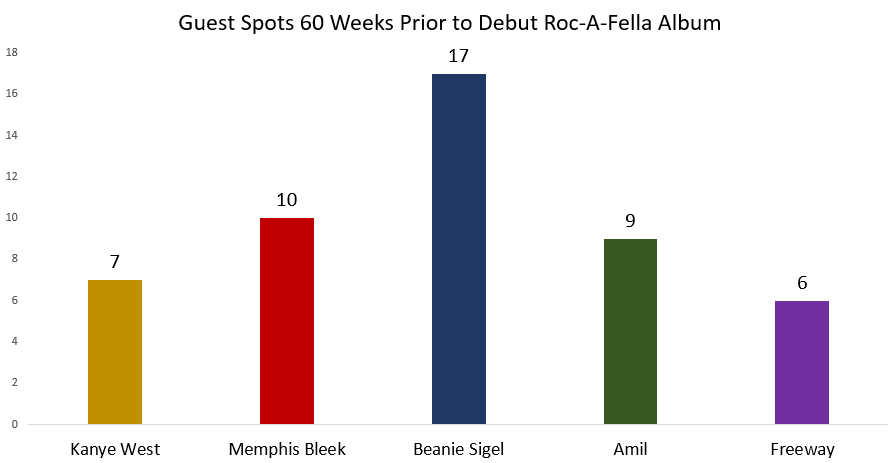 None of these rappers had established careers prior to their Roc debut, and only Freeway picked up fewer guest spots than Kanye, though most of these were full verses, not hooks.

In the 60 days before The College Dropout was released, Ye delivered just 2,420 words, the least of any of his album cycles. 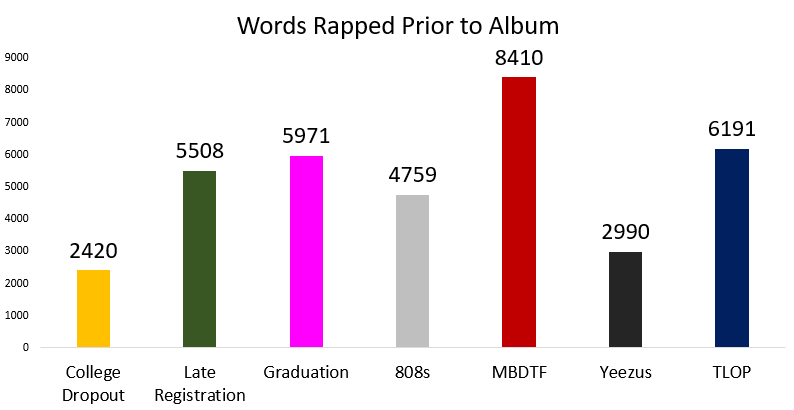 The numbers show that Kanye’s hook game wasn’t appreciated either, with this album cycle being his least prolific for total words devoted to hooks.

It’s odd – Jay-Z was happy to utilise Ye’s hooks on both “Encore” and “Lucifer” (although Kanye wasn’t listed as a feature artist on either of these tracks), yet Ye’s opportunities to deliver hooks outside of that were small. 69% of his hook words came on his own solo tracks, so just 31% were from guest spots. The majority came via Twista’s “Overnight Celebrity”, which had 200 words from Ye on the hook.

Kanye West Was Seen As “Just A Producer”

As far as Kanye producing for other artists, The College Dropout was not the most prolific album cycle. However, it does equal second, and highlights the over-arching narrative and hypothesis that Ye was seen primarily as a producer. 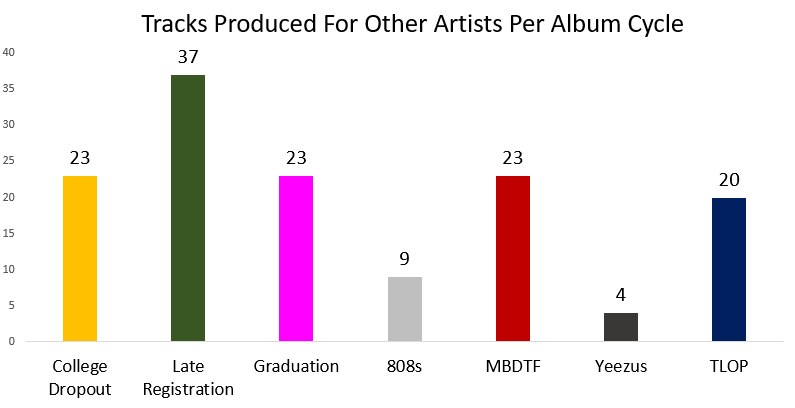 Naturally, his groundbreaking work on The Blueprint created high demand for Kanye’s sped-up soul-samples from classic artists like Lauryn Hill and Marvin Gaye. Ye’s work with Jay-Z was wildly successful; twice in the space of 14 months Kanye-produced songs became Jay’s highest charting single (“Izzo (H.O.V.A.)” in August 2001, 8, and “‘03 Bonnie & Clyde” in October 2002, 4), a huge feat for a collaboration with an artist who was already at the very pinnacle of hip-hop music.

This could easily be a contributing factor to Ye’s production pigeon-hole. The following graphic shows the percentage of Kanye-created releases devoted to production per album cycle, adding a statistical proof to this idea: 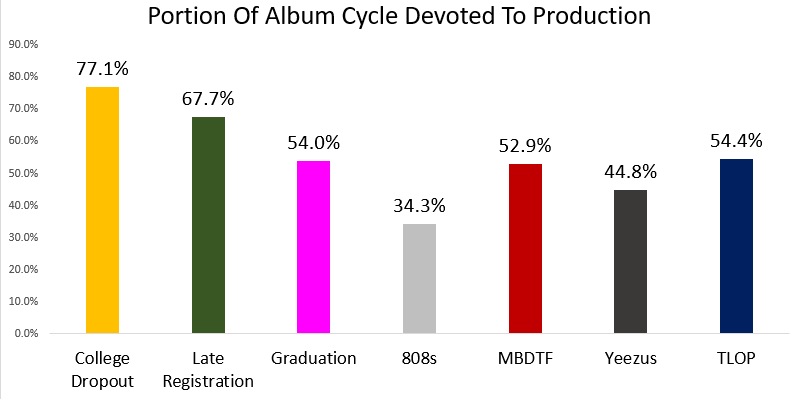 The College Dropout is the most production-heavy album promotion cycle of Ye’s career. He crafted tracks for 19 different artists (including himself), produced 7 singles, 19 album tracks, and 12 mixtapes tracks and loosies.

Kanye may have been a victim of his own success as a producer, though not for long. His debut album dropped, plaudits were universal, his success was cemented with the number 1 single “Slow Jamz” and a number 2 spot on the Billboard 200 (with 441k sold first week), and he only missed the top spot thanks to the platinum-in-a-week Norah Jones album Feels Like Home.

More-so than commercial success, Kanye bucked the trend of slick, hard-edged gangster music and machismo that was dominating the mainstream landscape through 50 Cent’s Get Rich or Die Tryin’, Eminem’s The Eminem Show and Jay’s The Black Album. With “Jesus Walks” and “All Falls Down”, Kanye challenged the concept of accepted lyrical content and paved the way for his next 3 albums, and major success for artists like Common with 2005’s Be. 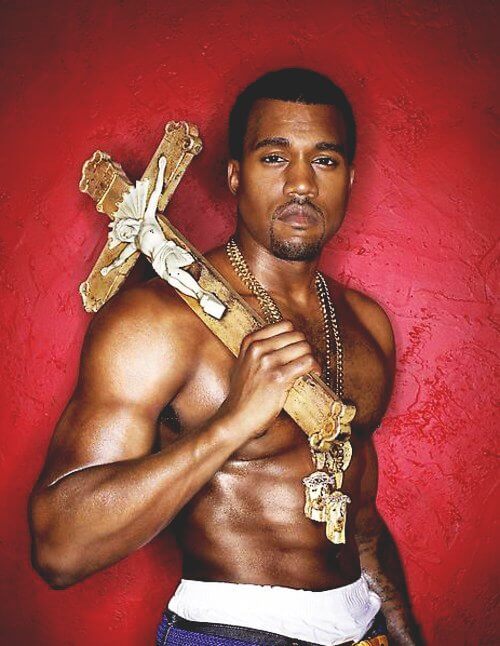