All American Boyband / art collective Brockhampton is on the road for their biggest tour ever (and it’s not even close). Venues are selling out left and right as fans clamor to see the group perform tracks off their hit album Saturation III for the very first time.

Here are the most unforgettable moments of the Love Your Parents Tour so far.

#1: BLEACH and a Touching Tribute

During Brockhampton’s first full performance on the Love Your Parents Tour, Dom McLennon became overcome by grief during his emotional verse “BLEACH”. The talented 25 year old lyricist experienced the passing of a dear friend on the day Saturation III was released – giving his already powerful verse even more weight. Fortunately, JOBA was there to support him during the show in the midst of such a powerful moment.

Dom’s verse on BLEACH:
“They ask me “do you make mistakes or do you make a change?”
Or do you draw the line for when it’s better days?
We taste the wind for when it’s cold enough to kill our flame
I wonder who’s to blame?”

#2: Our First Look at BOOGIE Live

Brockhampton’s show in Santa Ana was notable for a few reasons. First off, they were opening for Tyler, the Creator of Odd Future, one of Brockhampton’s biggest musical influences and a personal hero of Kevin Abstract. Secondly, the Santa Ana show marked the first time a video leaked of Saturation III’s absolutely wild single, “BOOGIE”. It was nuts.

JOBA’s verse on BOOGIE:
“Break necks, I’m the chiropractor
Come on down, you know I gotcha
Real shit, feelin’ saturated
Realign the spine, fuck the haters”

Related Sauce:   Straight from the Dungeons of Rap: An Exploration and Oral History of "Illmatic"

Brockhampton is announced as part of Coachella’s 2018 lineup. The boys are scheduled to appear on the same day as big name artists like Beyonce, Tyler, the Creator, Post Malone, and HAIM. The announcement was particularly massive for Kevin Abstract, who tweeted about his dreams to play Coachella one day all the way back in 2013:

I wanna play Coachella so bad. Just putting that out there in the universe.

Brockhampton’s one night stop in San Antonio was one of the wildest shows the boys had ever had. The Texas crowd brought major energy and Brockhampton brought it right back. But in the end, the crowd won – if Dom’s tattoo was any indicator.

Lmfao yeah someone clean ripped the ink off part of my tattoo y’all were fucking insane tonight it was awesome! https://t.co/habX8oBrDs

Kevin (aka Ian) seemed to be enjoying himself too:

Ian dancing to HOTTIE is definitely in my top five moments of LOVE YOUR PARENTS tour so far pic.twitter.com/0Bogeon0jx

The next night on the tour saw Brockhampton make a cathartic return to Austin, Texas – a city with which several members of the group have strong ties. Merlyn Wood, for example, went to college in Austin where he studied architecture. The night was also special for Kevin, albeit for different reasons.

There’s a video of me online im front row at a tyler concert and tonight I am performing at that same fucking venue and it’s sold out !!!!!!!!!! I know that sounds stupid but that was only like 2 years ago man life is crazy wow

The show in Austin also gave us our first peak at “JOHNNY” performed live:

The first two night stop of the Love Your Parents Tour proved to be deserving of the hype. Virtually every member of the group tweeted various profanities and exclamations about the crowd. I think these 12 seconds that Brockhampton’s Kevin Doan posted on Twitter sums it up pretty well.

ACCIDENTALLY STOPPED RECORDING BUT THIS WAS CRAZY ATLANTA HAHAHA pic.twitter.com/pPkZ5aI8Fk

Another great moment from the Atlanta shows came by way of reddit. Earlier in the day, the aptly named u/2018IsBetterThan2017 posted on r/brockhampton to ask about everyone’s favorite brockhampton lyrics, explaining that he was going to the show alone because he was new to Atlanta. Two hours later, he was having one of the best moments of his life after getting pulled on-stage by Kevin Abstract and Ameer Vann. This type of shit is exactly what a Brockhampton tour is all about.

Check out the full set (and yes that’s the guy right there in the thumbnail):

With back to back nights in the Sunshine State, things started to escalate. Brockhampton were taking every opportunity to interact with fans before and after the show. Fans started to catch on and Ameer ended up being convinced to part way with his shoes. [SPOILER: his feet were fine, apparently he has multiple pairs of shoes].

Check out this snippet from the show:

#9: A True Team Effort in Maryland

The Fillmore, Silver Springs, MD (January 28th, 2018)
After weeks of battling through an ailing voice to perform, Kevin Abstract finally succumbed to sickness and was unable to perform more than a couple songs in Maryland. But the team pulled together to carry the show in his absence. With Merlyn, Matt Champion, and Joba covering on the hooks and Big Daddy Ameer holding it down on his verses, Kevin’s sheer energy and stage presence was missed more than anything.

Here’s a video of Merlyn’s verse on SWEET followed by Joba and Ameer filling in for sick ass Kevin on the chorus:

And of course, no Brockhampton experience would be complete without the legendary sway from HEAT. Although he still hasn’t gotten it 100% down, Merlyn showed off the remarkable growth he’s made in synchronized swaying since the HEAT music video.

I’ve been to Times Square at least 10 times in my life, and this is by far the closest it’s ever gotten to full-blown riot. The boys pulled up in a Mercedes van proceeded to strut down Times Square backed by an army of raging fans. Pay close attention to Dom, who seems like he’s legitimately having the time of his life.

Kevin also had a hilarious shout out in the pre-show interview wishing Harry Styles a happy birthday. Hopefully he can finally get that man’s phone number. 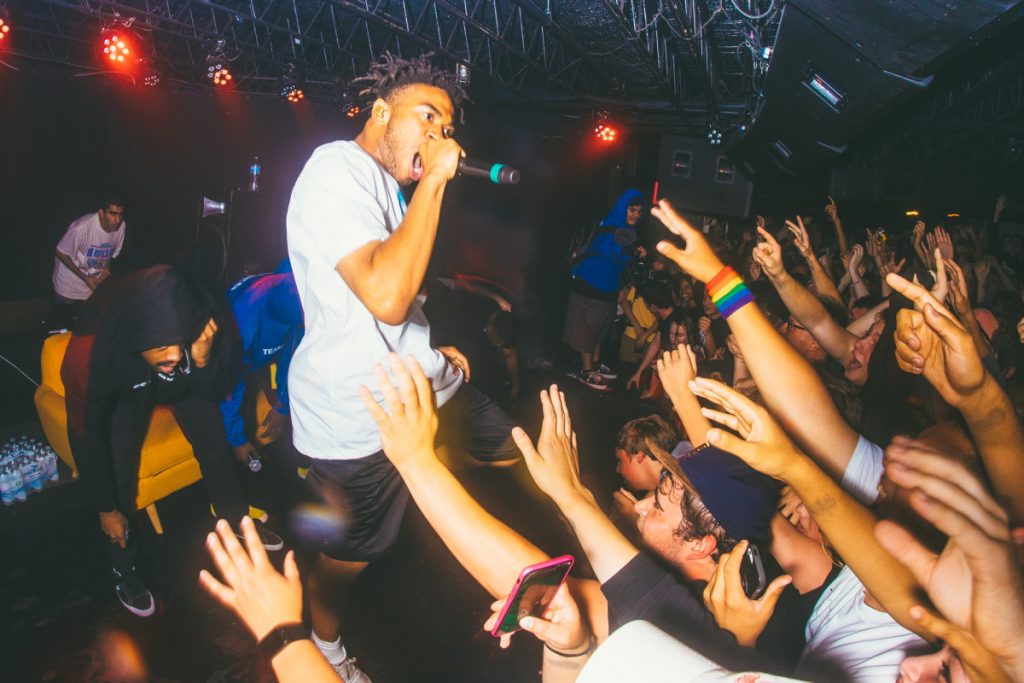 What a tour it’s been. These guys are going to be selling out arenas one day without a doubt. If you can, do your best to see them before the venues and crowds get too big.