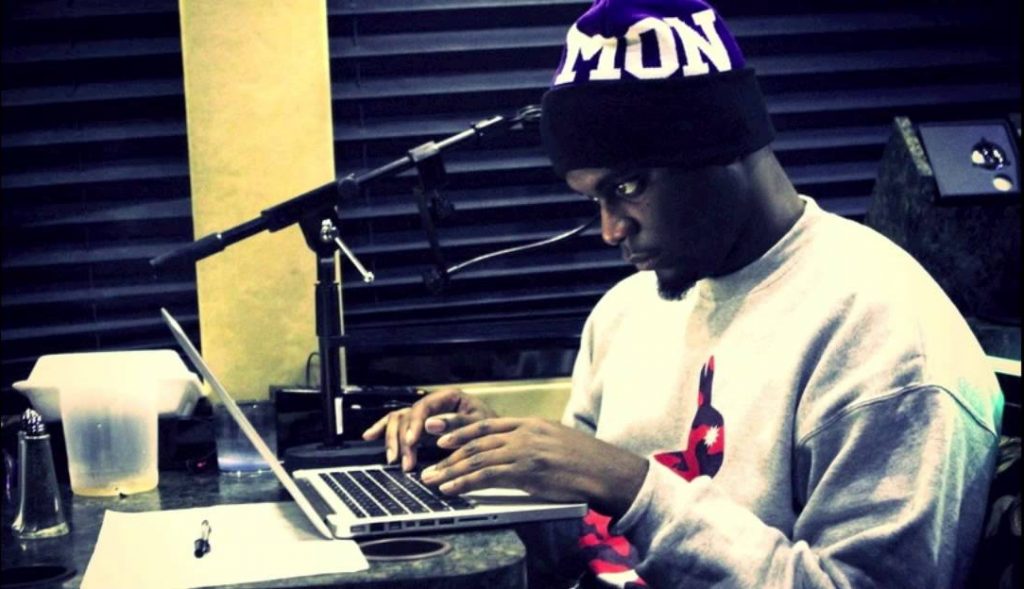 In today’s era of collaborative production, Big K.R.I.T. stands alone. Despite producing 67.9% of his album tracks alone – with no co-production whatsoever – K.R.I.T. has ascended commercial peaks historically reserved for elite rappers backed by production rosters as long as a phone book. He has carved his own path from the very beginning, employing an incredibly unique and possibly groundbreaking production process.

Big K.R.I.T. is the quintessential lone wolf of hip-hop.

From learning production arrangement on the Playstation 1 to producing 248 tracks (out of 318) alone, with no co-production since his origins in 2008, Big K.R.I.T.’s singular approach is truly unique in mainstream rap. K.R.I.T. has produced and independently released six mixtapes over 5 years, producing 73.5% of those 140 songs by himself, with no co-production help.

Such a high level of self-produced artistry was resolutely rare during the mid-to-late 2000s, especially on a mixtape scene in which Lil Wayne was eating up other rappers’ beats and spitting out a glittering major label career. K.R.I.T. resisted the allure of jacking high-profile beats to focus on his own artistry, and was rewarded with a major label deal via Def Jam in 2010.

Even after this deal, with the enticing roll call of producers K.R.I.T. now had at his disposal (with Def Jam’s contact list, few producers were out of reach), he bet on himself, trusting not only his own vision and artistry, but his own skill behind the boards: 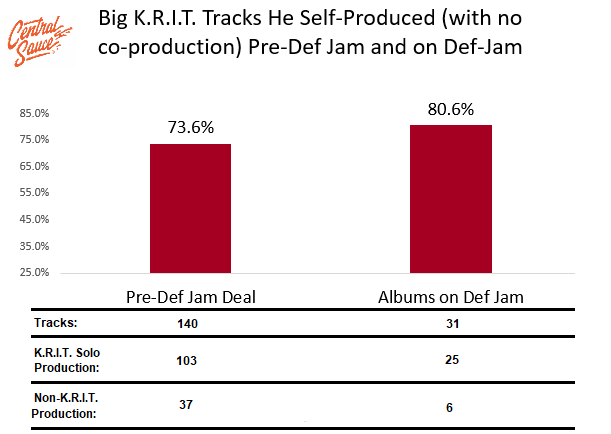 The belief in himself paid off, resoundingly. His two Def Jam albums, Live From The Underground and Cadillactica both peaked at number 5 on the Billboard 200, and both were critically acclaimed, with Cadillactica receiving universally positive reviews, sitting at 88/100 on Metacritic. He produced 80.6% of those two albums alone, without any co-production (also a distinct rarity – even Kanye West used 4.4 producers per-track on 2018’s ye, and collaborative production is now the norm).

K.R.I.T. Producing For Other Artists

Since 2007, K.R.I.T. has produced 54 tracks for other artists, averaging nearly 5 tracks per year. This is selflessly prolific for an artist who released 16 projects of his own in this period. He tends to perform as a guest on the tracks he produces: 54% of the songs he has produced for other artists also list Big K.R.I.T. as a guest performer. His collaborators are upper echelon too: Wiz Khalifa, Smoke DZA, Freddie Gibbs, Ludacris, Curren$y, T.I., Juicy J and Bun B have all been recipients of K.R.I.T. beats.

The only album K.R.I.T. has produced 4 or more beats on (that wasn’t his own) is Bun B’s 2018 record Return of the Trill, on which K.R.I.T. grabs 7 production credits. 2018 has been his second most prolific year, and only the second time he’s produced 10 or more beats for other artists. The other was 2012, with 15 beats produced for others. 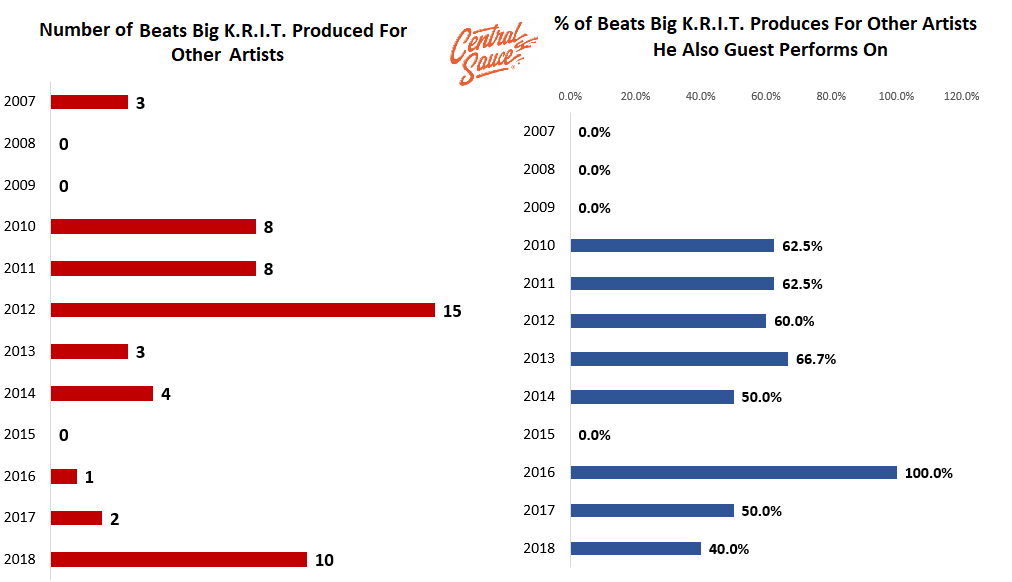 K.R.I.T.’s Journey as a Dual-Discipline Artist

K.R.I.T. has cited a variety of influences for his work as a producer, including Three 6 Mafia, Outkast, David Banner and Pimp C – but the most surprising component of Big K.R.I.T.’s production roots is a Playstation game called MTV Music Generator, released back in 2000.

It started on MTV Music Generator. That was like, the first thing I started making beats on—Playstation” – Big K.R.I.T. (2017)

The software was crude and ill-suited to making beats anywhere near the lush sample-based beats of the mainstream (Kanye West, Just Blaze, Bink!), the sparse evolution of the boom-bap generation (The Neptunes) or the influence of neo-soul and funk of the Soulquarians. Yet it taught K.R.I.T. to craft beats with the most skeletal of equipment.

I’m telling you, if you could make something remotely jamming on that, then you’d be good as a producer. Cause it wasn’t the craziest beats. It sounded cheesy now that I think back on it. But it was just the beginning of showing me that I can pretty much work on any console and make a beat out of it.” – Big K.R.I.T. (2017)

Fruity Loops was his next port of call, allowing K.R.I.T. to rapidly expand his musical palate, with a suite of features and synthetic instruments, and an easy to use interface that facilitated lusher arrangements. In 2012 he progressed to programs Reason and Protools. During a video for Mass Appeal’s Rhythm Roulette series, he can also be seen using an Alesis Q25 keyboard controller. His mastery of creating beats from samples was explored in that video, where he is given 3 blind records to create a beat from scratch out of. He is capable of chopping with the best.

Sampling isn’t K.R.I.T.’s defining technique, it merely adds to the tapestry his production weaves around both his influences and his own distinct sound. Bass underpins the majority of his creations, no more potent than “My Sub Pt. 3”, the third installment of a series of tracks centred around how violent the sound system in his car is. This track is the peak of the series; a spacious beat with an 80s-style synth loop that allows that throbbing 808 to shudder the most fortified of car boot lids.

Whilst K.R.I.T. does slide those spacious thumpers into each mixtape and album, it’s the way his bass underpins the exploration of influence and regional sound that distinguishes K.R.I.T.’s hallmark sound. “What U Mean” is propelled by a bass riff, with flourishes added above to provide texture. The gospel influence on “Keep The Devil Off” stays solid enough for car speaker systems with a trademark thump, and the pianos on “Soul Food” are held together with bass.

Each touchpoint of Southern production (UGK, Outkast, Organized Noize) is represented and given a K.R.I.T. twist. Guitar, pianos, futuristic synth riffs, even horns on occasion (“What’s Next”) all provide a backdrop as unique as K.R.I.T.’s vocal flows. As K.R.I.T. told Mass Appeal: “But in this particular case [when I produce my own music], these records actually form fit, and they did exactly what they did and they sounded exactly how they needed to sound”.

As an influential figure in Southern rap, Big K.R.I.T. is capable of exerting sonic influence, and highlighting parts of the culture new artists may have forgotten. On 2017’s 4eva Is A Mighty Long Time, a record he paid for out of his own pocket, K.R.I.T. dips heavily back into blues, jazz, and live instrumentation.

The warmth of a live instrument brings a certain feel to a song that is really hard to get from synthesized instruments… People need music that makes them feel like someone else understands. And sonically, you can get that across with having the warmth and the dedication of an instrument actually speaking to people instead of it being an eight-bar loop… Sometimes that doesn’t feed the soul like a bassline might or a guitar might, or a piano or organ depending on how it’s played.” – Big K.R.I.T. (2017)

And warmth was essential on that album, one that dealt with very human and very delicate topics such as anxiety, depression and alcohol addiction. An album dealing with the price artists can physically and mentally pay for fame would likely sound disingenuous over constructed and synthetic beats.

Prior to the release of 4eva Is A Mighty Long Time, K.R.I.T. had produced 265 officially released tracks, 50 of them for other artists. That 2017 album will likely be looked upon as a watershed moment in his career, on which he pinned his independent hopes after casting clear of Def Jam in 2016. He began production company MULTI, and positioned himself as the flagship artist, telling Billboard: “I produce, I mix, I rap, I write, I sing. I can play more than one position”.

4eva Is A Mighty Long Time was K.R.I.T.’s first double album, a format that has developed a fabled status in hip hop, especially during the 90s and 2000s (think of legendary double discs from 2Pac, Outkast and Notorious B.I.G.). The double disc is no easy feat to pull off – as Jay-Z and Young Guru discovered on The Blueprint 2 – but it was K.R.I.T.’s statement: a tight concept piece, designed to vividly expose both sides of K.R.I.T.’s personality (K.R.I.T. and Justin Scott).

The first album on his own production company required finesse and strong execution, and K.R.I.T.’s method was to ensure creative control to see it to fruition. He handles production on 11 of the tracks alone, and the most personal songs (“Big K.R.I.T.”, “Get Up To Come Down”, “Drinking Sessions”, “The Light”) are produced by him and only him. Big K.R.I.T.’s self-producing approach on the album helped inject true authenticity into the music, a trait rarely seen in modern hip-hop (another example is Tyler, The Creator, who produces over 95% of his own music, though he is also a rarity).

4eva Is A Mighty Long Time may become K.R.I.T.’s defining project, the one it took his whole life to make. The 265 songs he had produced prior to the album gave him a solid experiential education in instrumental production, allowing him an unexplored entrance into the almost mythical pantheon of legendary double albums. Only time and perspective can weave that narrative fully, but it didn’t drop with the stigma of mediocrity so many other post-2000 double albums have had attached (notably The Blueprint 2 and Streets Disciple). Despite being an independent release, 4eva Is A Mighty Long Time charted at number 7 and holds an 80 on metacritic.

The story of Big K.R.I.T. may not be quite as unique had his career been confined to the underground. Dual-discipline artists with his prolific production numbers exist below the charts (MF DOOM, Hopsin, Aesop Rock, Buck 65, Alias etc) in larger numbers than they do on the charts. To forge a mainstream career whilst producing 68% of your album tracks alone, with no co-production, takes a true artist. K.R.I.T. defines his class.