Nashville neo-soul artist, Arlana, brings her brand of “Authenticity” to our SubmitHub inbox. She simply says “independent, authentic, creative.” Letting the art speak for itself and she certainly speaks. Her work is here to bring out her true self and others.

In the age of social media, at times, it’s hard to tell what is real and what is fake. Something can be easily photoshopped or tinkered with to appear as something else. Smoke and mirrors through plastic screens that hold you hostage to fictitious imagery. Through it all, it’s up to an individual on whether they stay in the land of forged reality and join this deceptive culture, or they can choose to be themselves without anything to hide who they really are.

I see it in the music industry. Artists have to sell an image that’s not themselves. Chasing clout and clickbait headlines, purposeful hot takes to just get attention. You can make it in the industry being yourself but the higher you climb, the harder it is to maintain that realness. Arlana’s “Authenticity” tries to highlight and celebrate the sincere truths that are overshadowed.

Some people want money, some people want to be famous (or infamous). I just really love music, but the voices of doubt could get really loud sometimes, and I often grappled with changing my sound or image to be more palatable and have a better chance at “making it.” – Arlana for CentralSauce

Harmonizing with vocals reminiscent of an a capella artist, Arlana digs into her experience and what she’s seeing around. Petty fools concerned with what’s given to them and not what is actually behind the curtain. The Wizard of Oz may promise an emerald city but once the paint washes off, you’re left with being a slave to a city you’re now stuck in. She said writing this record “kind of woke me up; it was a reminder to stay true”.

Authenticity ain’t what it used to be / Oh the higher you climb, the more you leave behind / They say authenticity won’t sell, I disagree / Cause I’ll invest in what I see has some authenticity” – Arlana, “Authenticity”

Arlana doesn’t want false realities. It haunts her dreams. It’s a place she can’t be and doesn’t want to stay there any longer. She’s breaking out and laying the ground for the reality she wants to see. On the hollowed out bridge she sings “I don’t need your money / I just want to be free,” because the money on the table won’t let her leave her integrity behind.

Related Sauce:   Why We Like It: Kai Straw's “Are You Coming With Me?”

It’s easy to get caught up but when you’re focused on the ultimate goal, you don’t stray. Artists, writers, performers, etc could easily see a yellow brick road of fame but the road less traveled by staying you is ultimately what’s good for your soul. For me, I’m gonna take my bags and follow who I’m meant to be. 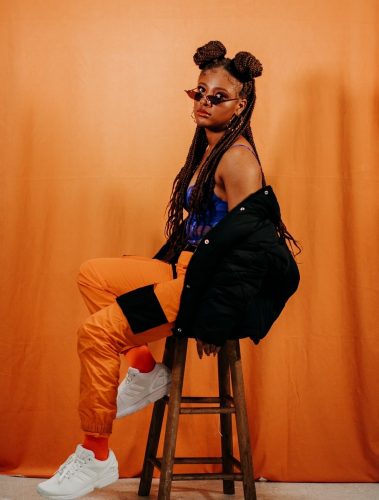 “I wrote this song in college about 4-years-ago with my friend Josh Ashley (who co-produced the track with me). We were in a band together and he played me this bass synth beat that he had made. From there, we just started messing around, and it was the melodic line for “Authenticity ain’t what it used to be” that caught his attention. It took a while to figure out what direction to go production wise (we tracked the song probably about 3 times before we realized that we couldn’t just approach it any other song). Took a lot of patience and trying different things to finish this record.

I wanted people to groove. I feel like really good music, even when it’s somber sounding or slow, you can’t sit still. It does something to you where you have to dance, or twitch, or smile. You might lift your hands up and make a stank face when you hear a certain chord or run, get chills, etc. I want listeners to feel that uncontrollable urge to move. I have an album I’m working on where I hopefully get to make people feel that ten times over.”