Like a field goal in the last five seconds, “Mike Vick” came sailing into our Submithub inbox not a moment too soon. Admittedly, as an Australian, America Football is a little more foreign to me, and though I enjoy watching it (and Last Chance U), it’s still an oddity that us convicts can’t quite figure out. Even whilst steeped in a reference I only partially understand, “Mike Vick” is an undeniable heater.

Superbowl season is an event unto itself, even all the way from Australia. It means caring disproportionately about a game you seldom watch and only partially understand, and if that’s not enough, it’s the one day of the year your socials are replete with wilfully-shared advertisements. It’s nice to be able to say that, though a tradition year-in and year-out, at least we scored a mean hip-hop anthem from the 2019 championship game!

“Mike Vick” finds Anterluz and iE-z balling with riches and pigskins, singing the praises of their team whilst detailing casino nights and fine dining. Anterluz’s verse is replete with pop-culture quips, with Peter Parker to Darth Vader bringing punctuation to his slight observations and hip-hop allusions, whilst iE-z’s confrontational bars tell the tale of his return in an accusatory second-person. There’s no bar-trading here, but the way in which the pair attack the instrumental attests to their chemistry, which makes for a complete and compelling banger. At three minutes, “Mike Vick” feels briefer – a simple-yet-effective instrumental, a verse apiece and a punchy refrain, the track really is an exercise in hip-hop fundamentals. That might be the wrong word: Anterluz and iE-z have had enough of practice, and on “Mike Vick,” they don’t just come to play – they come to win. 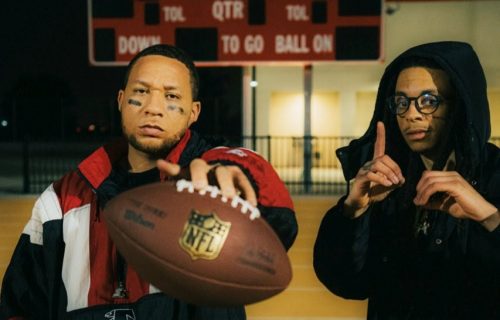 IE-z and I have a friendship that goes way back to middle school, meeting in 6th-7th grade. We attended the same high school together (ETIWANDA High School) as well which is where we shot the video trailer on the football field for “Mike Vick.” So that record/video is really personal to us because we stepped back onto our old stomping grounds where we first developed our friendship as kids – not even music related at the time. I believe this is why we have such chemistry on the record because of the genuine friendship that’s there. We both bring different talents to the table and are very well aware of it – so when we combine it – it covers all bases that any great song would need.” – Anterluz for CentralSauce (2020)

Related Sauce:   Why We Like It: Nora Toutain’s “Not an Interlude”

You can tell this isn’t Anterluz’s first game, and rightfully so: the man’s released two records, 2014’s The Ritz and 2019’s Loudest Amen. “Mike Vick” is his first single of the new decade, and seeing how infrequently he’s dropped loosies, it’s a good sign of things to come! He’s on Instagram, Twitter, and Facebook, like the rest of us, because this is how we live now.

iE-z is less prolific, and he’s got just two singles – 2017’s “California” and 2019’s “Kings Don’t Die” – up on Spotify. He’s no stranger to a guest spot, though, and “Mike Vick” marks his first feature of the new decade. The Inland Empire emcee has a SoundCloud, as well as Instagram, Facebook and Twitter, but if his bio is anything to go by, his most prized possession is his creative drive.